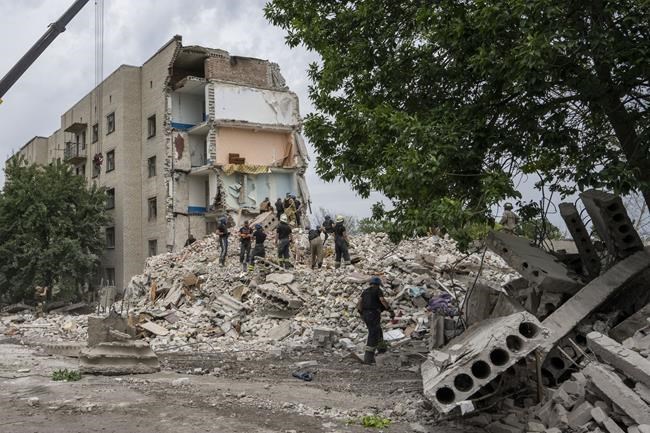 CHASIV YAR, Ukraine (AP) — Dozens of Ukrainian rescuers worked Sunday to pull people out of the rubble after a Russian rocket attack slammed into apartment buildings in eastern Ukraine, killing at least 15 people. More than 20 people were believed to still be trapped.

Saturday night’s strike destroyed three buildings in a residential area of ​​the town of Chasiv Yar, inhabited mainly by people who work in nearby factories.

On Sunday evening, rescuers managed to remove enough bricks and concrete to recover a man who had been stuck for nearly 24 hours. Rescuers laid him on a stretcher and he was quickly taken to hospital.

Ukrainian emergency services said the latest rescue brought the number of people pulled from the rubble to six. Earlier in the day, they made contact with three others still trapped alive under the ruins.

Pavlo Kyrylenko, governor of the Donetsk region which includes Chasiv Yar, said around 24 people were still trapped, including a 9-year-old child.

Cranes and excavators worked alongside rescue teams to clear the ruins of a building, the walls of which were completely flattened by the impact of the strike. The thud of artillery on the nearby frontline echoed a few miles away, startling some workers and others taking cover.

Valerii, who gave only her first name, was desperately awaiting news from her sister and her 9-year-old nephew, who lived in the collapsed building and had not returned her calls since Saturday evening.

“Now I am waiting for a miracle,” he said, as he stood in front of the ruins and began to pray, his hands clasped tightly.

“We don’t have good expectations, but I avoid such thoughts,” he said.

Kyrylenko said the town of about 12,000 was hit by Uragan rockets fired from truck-mounted systems. Chasiv Yar lies 20 kilometers (12 miles) southeast of Kramatorsk, a town that is a major target for Russian forces as they advance west.

However, later on Sunday, Viacheslav Boitsov, deputy head of the Donetsk region emergency services, told The Associated Press that four shells hit the neighborhood and they were likely Iskander missiles.

Residents said they heard at least three explosions and that many people were seriously injured in the blasts. A group of neighbors sat in a courtyard on Sunday to quietly discuss who was injured and who was still missing.

“There was an explosion, all the windows blew out and I was thrown to the ground,” said Oksana, 45, who only gave her first name. She was in her third-floor apartment when the missiles hit .

“My kitchen walls and my balcony are completely gone,” she added, struggling to hold back tears. “I called my children to tell them I was alive.”

Irina Shulimova, a 59-year-old pensioner, recalled terror. “We didn’t hear any incoming sound, we just felt the impact. I ran to hide in the hallway with my dogs. Everyone I knew started calling me to find out what had happened. I was shaking like a leaf,” she said.

Entrance doors and balconies were ripped apart by the blast, and heaps of twisted metal and bricks lay on the ground. Crushed summer cherries were strewn across broken window panes.

A 30-year-old technician named Oleksandr said his mother was among those injured in the blast.

“Thank God I wasn’t hurt, it was a miracle,” he said, touching the crucifix around his neck.

Although the house he shares with his mother is now destroyed, he says he has no intention of leaving the neighborhood.

“I have just enough money to support myself for another month. Many people are already fed up with the refugees coming from the East – no one will feed or support us there. It is better to stay,” said Oleksandr, who declined to give his last name.

Another resident who gave only his first name, Dima, had lived for more than 20 years on the ground floor of one of the buildings dug during the attack. He was going back and forth over the rubble.

“Whoever orders such strikes, whoever carries them out in ordinary towns, in residential areas, kills in an absolutely conscious way,” he said in an address to Ukrainians on Sunday evening. “After such beatings, they won’t be able to say they didn’t know or didn’t understand something.”

Saturday’s attack was just the latest in a series of strikes against civilian areas in the east, even though Russia has repeatedly claimed it only hit targets of military value.

Twenty-one people were killed earlier this month when an apartment building and a recreation area came under rocket fire in the southern region of Odessa. At least 19 other people died when a Russian missile hit a shopping mall in the city of Kremenchuk in late June.

There was no comment on the Chasiv Yar attack during a Russian Defense Ministry briefing on Sunday.

The Donetsk region is one of two provinces along with Luhansk that make up the Donbass region, where separatist rebels have been fighting Ukrainian forces since 2014. Last week Russia captured the city of Lysychansk, the last major stronghold of the Ukrainian resistance in Luhansk.

Russian forces are raising “real hell” in Donbass, despite assessments that they were taking an operational pause, Luhansk Governor Serhiy Haidai said on Saturday.

After the capture of Lysychansk, some analysts predicted that Moscow’s troops would likely take some time to rearm and regroup.

But “until now, there has been no operational pause announced by the enemy. It is still attacking and bombarding our lands with the same intensity as before,” Haidai said.

He later said that Ukrainian forces had destroyed ammunition depots and barracks used by the Russians.

Follow all AP stories about the war in Ukraine at https://apnews.com/hub/russia-ukraine.