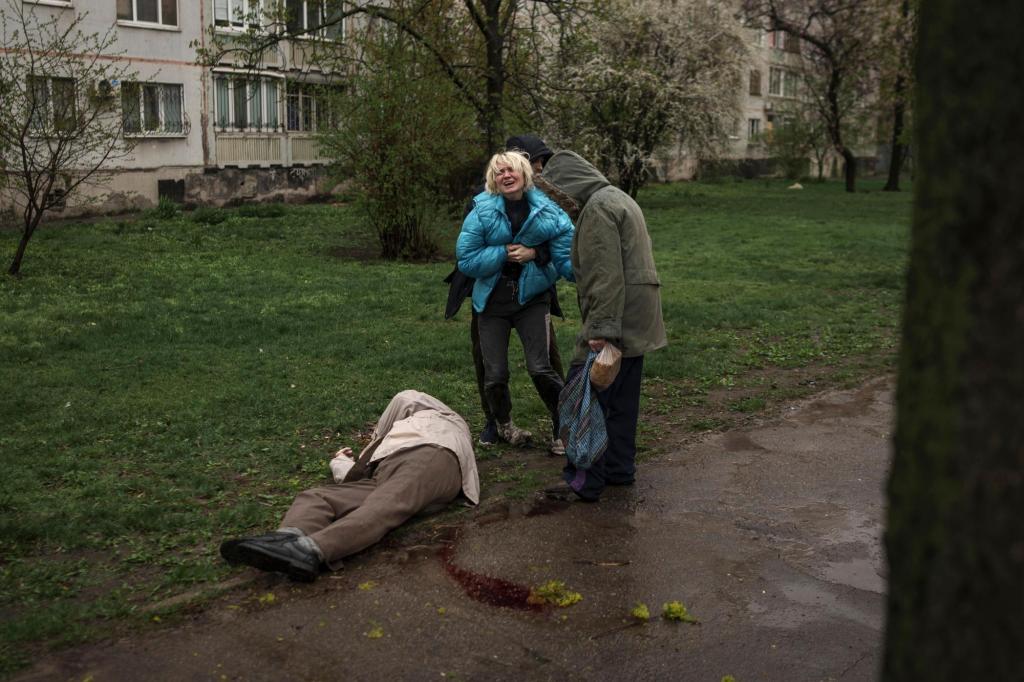 By The Associated Press

MOSCOW — Russian President Vladimir Putin has said the barrage of Western sanctions against Russia has failed.

Putin said on Monday that the West “expects a rapid upheaval in the economic and financial situation, causing panic in the markets, the collapse of the banking system and shortages in shops”. He added that “the economic blitz strategy has failed”.

The Russian leader spoke in a televised address during a video call with top economic officials.

Putin noted that “Russia has withstood unprecedented pressure,” saying the ruble has strengthened and the country posted a historically high trade surplus of $58 billion in the first quarter of the year.

Instead, he argued that the sanctions backfired on the United States and its European allies, accelerating inflation and driving down living standards.

Putin acknowledged a sharp rise in consumer prices in Russia, saying they rose 17.5% in April on an annual basis and ordering the government to index wages and other payments to mitigate the impact of the crisis. inflation on people’s incomes.

KEY DEVELOPMENTS IN THE RUSSIAN-UKRAINE WAR:

Follow all AP stories about Russia’s war on Ukraine at https://apnews.com/hub/russia-ukraine.

KYIV, Ukraine – Ukraine’s Deputy Prime Minister has said Russia could be prosecuted for war crimes over its refusal to allow humanitarian corridors for civilians trapped in the city of Mariupol.

Earlier on Monday, Iryna Vereshchuk said no evacuations were possible for the second day in a row due to Russian attacks on civilian convoys.

“Your refusal to open these humanitarian corridors will in future be a reason to prosecute all those involved for war crimes,” she wrote on her Telegram and Facebook channels.

Vereshchuk again called on Russia to allow the safe evacuation of civilians from Mariupol, especially from the Azovstal steelworks, which covers more than 11 square kilometers (4 square miles) and is interwoven with tunnels.

According to Vereshchuk, the government had negotiated the passage of Mariupol and Berdyansk, among other cities, as well as the Luhansk region. The Luhansk government said four civilians trying to flee the area were shot dead by Russian forces.

The Russians, in turn, accused Mariupol’s “neo-Nazi nationalists” of obstructing the evacuation of civilians from Mariupol.

KYIV, Ukraine – Ukraine’s State Security Service released a video of a Ukrainian politician charged with treason offering himself in exchange for the evacuation of trapped civilians from Mariupol, while two British men who surrendered to Russian forces in Mariupol appeared on Russian media asking to participate in an exchange.

The video of Viktor Medvedchuk, the former leader of a pro-Russian opposition party with personal ties to Russian President Vladimir Putin, was released on Monday. In it, he specifically calls on Putin and Ukrainian President Volodymyr Zelenskyy to consider the swap.

Medvedchuk was arrested last Tuesday in a special operation by the Ukrainian State Security Service, or SBU. The 67-year-old oligarch escaped house arrest several days before the outbreak of hostilities on February 24 in Ukraine. He faces between 15 years and life in prison for treason and complicity with a terrorist organization for having negotiated coal purchases for the separatist republic of Donetsk, supported by Russia, in eastern Ukraine.

The British men identified themselves as Sean Pinner and Aiden Aslin. In a video, Pinner asked British Prime Minister Boris Johnson he hoped to be traded. Pinner had deep dark circles under his eyes and looked exhausted, but he said both men were treated appropriately.

The circumstances of the videos were unclear. The two videos were released less than an hour apart.

ROME — Italian officials will go ahead with an energy trip to Africa this week as part of Prime Minister Mario Draghi’s effort to quickly reduce the country’s heavy reliance on Russian gas, but he won’t go because he has tested positive for COVID-19.

The Prime Minister’s Office, announcing the infection, said on Monday that Draghi had no symptoms. The mission to Angola and Congo, scheduled for Wednesday and Thursday, will instead see the government represented by its ministers of foreign affairs and ecological transition.

Italy buys almost 40% of its gas from Russia. Draghi is determined to drastically reduce that dependence over the next two or three years, largely by sealing deals with other energy-producing countries. Draghi recently visited Algeria to conclude such an agreement as part of the strategy.

BELGRADE, Serbia – Serbian President Aleksandar Vucic has accused the secret services of Ukraine and an unidentified European Union country of being behind a series of false bomb threats against flights from Air Serbia to Russia.

The Serbian flag carrier is the only European airline that has not joined international anti-flight sanctions against Russia for its war in Ukraine. Several of its flights to Moscow and St. Petersburg were delayed or had to return to Belgrade after the anonymous bomb threats.

In an interview with pro-government Pink TV on Sunday night, Vucic said that “foreign (intelligence) services from two countries do this. One is an EU country and Ukraine is another.

The pro-Russian Serbian leader did not provide evidence to support his claims. Other Serbian officials alleged that the threatening emails were sent either from Ukraine or Poland.

Vucic said that although Air Serbia’s flights to Russia are unprofitable due to frequent returns to their base in the Serbian capital, the flights will continue “as a matter of principle”.

MADRID — Prime Minister Pedro Sánchez has said Spain will reopen its embassy in the Ukrainian capital Kyiv within days.

Following similar decisions by several European neighbors, Sánchez said the reopening was “to show again the commitment of the Spanish government and the Spanish people with the Ukrainian people“.

“Spain is with Ukraine and we are against (Russian President Vladimir) Putin,” Sánchez said in an interview with Spanish television Antena 3. “It’s a Putin war against what the Union stands for. European.”

Spain closed the embassy hours after the Russian invasion on February 24.

KYIV, Ukraine – Lviv Mayor Andriy Sadovyi said seven people were killed and 11 others, including a child, injured by Russian strikes in the western Ukrainian city.

Plumes of thick black smoke could be seen rising above the city as multiple explosions were reportedly caused by hit missiles, according to AP Lviv staff.

Lviv Regional Governor Maksym Kozytskyy said there were four Russian missile strikes, three of which hit military infrastructure and one hit a tire store. He said emergency crews were putting out fires caused by the strikes.

Oleksandr Kamyshin, the chairman of Ukraine’s railway service, said the strikes hit near railway facilities. He said rail traffic had resumed with some delays and he pledged to restore the damaged network.

Lviv and the rest of western Ukraine have been less affected by the fighting than other parts of the country and are considered a relatively safe haven.

MOSCOW — The Russian military claims to have hit more than 20 Ukrainian military targets with missiles.

Konashenkov also said the army fired land-based Iskander missiles to destroy four ammunition dumps and three groups of Ukrainian troops near Popasna and Kramatorsk in the east and Yampil in central Ukraine.

He said the military used artillery to strike 315 Ukrainian targets and Russian warplanes carried out 108 strikes to target Ukrainian troops and military equipment.

Konashenkov’s claims could not be independently verified.

LONDON — Britain’s Ministry of Defense says the continued siege of Mariupol is pinning down Russian forces and slowing its advance ahead of a planned major offensive in eastern Ukraine.

The Sea port city of Azov has been devastated in weeks of Russian strikes. Britain says “large areas of infrastructure have been destroyed” and that there are “significant” civilian casualties.

Britain accuses Russia of using similar all-out war tactics against civilian areas it has deployed in Chechnya and Syria, despite Russian claims at the start of its invasion “that Russia would not hit cities or threaten the Ukrainian people”.

LVIV, Ukraine — Ukrainian President Volodymyr Zelenskyy said Russian troops in southern Ukraine had committed torture and kidnappings, and he called on the world on Sunday to take action.

“Torture chambers are being built there,” Zelenskyy said in an evening address to the nation. “They are kidnapping local government officials and anyone considered visible to local communities.”

In the occupied parts of the Kherson and Zaporizhzhia regions, he said, the Russians are creating breakaway states and introducing the Russian currency, the rouble. Intensified Russian shelling of Ukraine’s second-largest city, Kharkiv, has killed 18 people and injured 106 in the past four days alone, Zelenskyy said.

He said a planned Russian offensive in eastern Ukraine “will begin in the near future”.

Zelensky again called for increased sanctions against Russia, including its entire banking sector and oil industry. “Everyone in Europe and America already sees Russia openly using energy to destabilize Western societies,” Zelenskyy said. “All of this requires greater speed on the part of Western countries in preparing a powerful new sanctions package.”