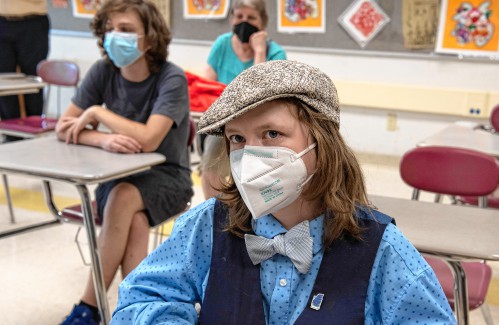 AMHERST — A whiteboard at the front of the Amherst Regional High School classroom displays several words and phrases written in Russian cursive, allowing students seated nearby to practice their speaking skills under the tutelage of Glynis Jones.

They can say “work” in Russian, in the singular and plural, as well as in the first, second and third person.

For 16-year-old Vladimir Kenney from Shutesbury, one of five high school students who make the after-school Russian club a regular part of their Tuesday afternoons, the spoken and written components of the language require a lot of memorization, but it was worth it.

“Last year I thought I wanted to learn Russian,” Kenney said of his interest in studying the language and culture and connecting with his family.

“I’ve seen it in the ads and I like the extracurricular activities,” said Lucy Thompson, 16, of Amherst, explaining the decision to join the club. “It’s very relaxing and we’re doing some interesting things.”

For Jones, a student Chinese teacher in middle and high school who studied Russian as a student at school in the early 2000s, the club is an opportunity to bring the language back to a critical time when Russia is at the center of concerns. of international attention, due to the invasion of Ukraine.

As an instructor, Jones not only aims to educate, but also hopes that one day Russian will regain at Amherst High the prominence it once held as a global language. However, this will depend on student buy-in and administration.

“Parents and the community can make a difference by adding and supporting a long-term optional program,” Jones said.

This afternoon, the club’s five regulars, joined by a first-time student, focused on better understanding the Russian language, as well as a video of a recent benefit concert for Ukraine . They also had the opportunity to meet Jude Wobst, who taught Russian for 34 years in the district before retiring.

Wobst, who inspired Jones, gave some history of the program which, in 2012, four years after his retirement, ended following budget cuts. Russian had been available to students through their six years of high school and built over time, including a month-long exchange trip she created where Amherst students would live with host families.

Wobst said the original Russian program grew out of a free period with students interested in the language, before it blossomed. “It was quite a shock when the program was eliminated,” Wobst said.

Jones fondly remembers competing in the National Russian Essay Contest and winning prizes at the New England Olympiada of Spoken Russian, and still keeps in touch with the Russian student she lived with. for a month.

When Jones started the club in the winter, his main goal was to improve knowledge of Russian history and contemporary issues, as well as to learn the language. Now, Jones said she hopes it can help humanize people who live under Vladimir Putin’s regime, and students aren’t shy about discussing issues with the Russian government and its ongoing military operation.

With posters in school hallways promoting the club, its most visible activity has been the ongoing pre-sale of T-shirts to raise money for an organization called Fight for Right, which helps people with disabilities find a housing in Ukraine. The club will also sell Russian sweets and tea. The T-shirts alone fetched $800.

Other projects have included listening to Slavic music and Russian folk songs, and Russian rapper In the Club, watching classic Soviet cartoons and playing Gorodki, an outdoor game similar to bowling and using a stick resembling to a baseball bat.

For the students who participate, they appreciate the cultural aspects.

“It’s definitely worth learning more about it,” Thompson said. “It is important to separate the Russian people from the Russian government.”

Tychon Tkachenko, 16, from Montague, said he enjoyed learning about the former states and republics that once made up the Soviet Union.

He also has close family ties, his mother having recently traveled to Poland to support housing for Ukrainian refugees near his home country.

For another regular, 15-year-old Despina Kevrekidis of Amherst, the club has meant learning more about Russian culture.

Jones credits Chinese teacher Yiping Yan, who allows her classroom use each week and has hired her as a student teacher. Jones said she hopes to onboard the school’s world languages ​​staff to continue teaching Chinese and eventually add Russian.

And with ongoing relief efforts in Ukraine, Jones said students learning the Russian language may be better prepared to help and travel to the region to help, writing in an email: is a language understood in Ukraine and would help students choose to participate in the relief efforts to come.

Scott Merzbach can be contacted at [email protected]