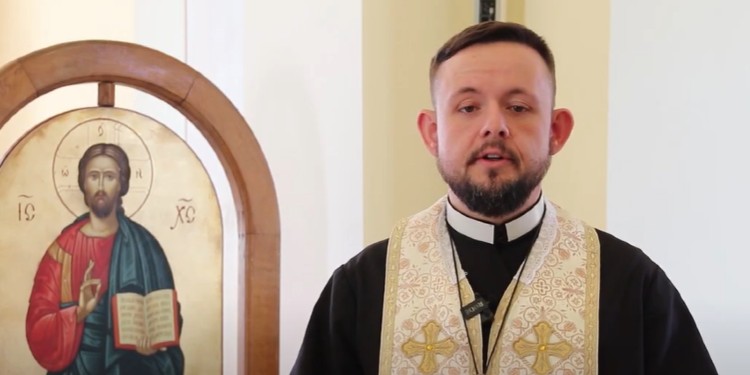 ROME — Ukrainians living in the cities hardest hit by the current war with Russia have many reasons to despair, but Father Taras Kchik has learned that sometimes a much-needed ray of hope can come from the simplest places.

Kchik was born in Kyiv in 1986, “technically, the Soviet Union”. His parents emigrated to Canada when he was three years old. He finished his secondary studies there and began his university studies to leave them unfinished and return to Ukraine, where he joined the Redemptorists.

When Russian President Vladimir Putin ordered the invasion of Ukraine, Kchik was in Ivano-Frankivsk, a city in the southeast of the country. Yet, he says, “last week, no, last month…time is a relative thing here,” his order called for him to go to Chernihiv, on the northern border with Russia, to help with the monastery – “it really is more than a house” – and temporarily replace the community of three priests who endured the 40-day siege of the city.

“Ivano-Frankivsk suffered rocket attacks, but especially on the outskirts of the city,” the priest said. Node by telephone. “Psychologically, it’s hard for people to bear, but it’s not a direct danger. Chernihiv was surrounded and attacked for 40 days in a row. There are parts of the city that no longer exist. There are tanks that were destroyed still in the streets. It is very difficult to walk the 10 minutes between our monastery and our church, and you have to cross two craters in the street and a bombed-out school. Unfortunately, they were really targeting infrastructure, so you can see the damage to hospitals and schools.

At the height of the siege, the monastery, occupied by two priests and a brother before the war, had an average of 45 people living there, with sometimes 58 people inside.

“People were trying to stick together, to feel that security,” he said. “We received humanitarian aid. We had a lot of people in our basement, and wherever you could put a mattress there was someone living there: the chapel, the kitchen, everywhere. And, of course, when there was bombing, everyone tried to rush to the basement.

Among them were three Redemptorist priests who, a few days before the war, had visited the monastery, as a way of expressing their closeness.

“They were transient but they got ‘stuck here’ and two of them had chaplaincy experience when the war started in the east in 2014 so they were very well adjusted and ready for what’s to come. happened here,” Kchik said. “I think there was a lot of guidance from God. I can see it in what happens here and in the way impossible tasks are accomplished.

God’s guidance, he said, is what gives him the strength to help others, many of whom have lost everything. The community he shares with the priests of the monastery, with the Redemptorists across Ukraine and around the world, is also a great support for him.

“Every time we get a shipment, I know who’s sending it, and they ship the things I mentioned we needed, like diapers,” Kchik said.

Since arriving in Chernihiv, he has been busy: “On the one hand, we try to give people all the comfort and support we can, and of course, at a time like this, people are even more looking for some kind of spiritual help, moral support or someone to just listen to them. On the other side, we are also providing humanitarian aid in any way possible to those who have suffered the most.

And they are also rebuilding their community. The priest said that when he arrived in Chernihiv, he was surprised at the number of people attending Sunday mass. He asked the superior if attendance had dwindled, only to be told that “it’s the same thing, but completely different: about the same number attend Sunday Mass”. , but only 10 percent of them are the same people who dated before the war. The rest is new.

This, Kchik said, has various reasons, including the fact that many parishioners who had family in the West left town when they could, and also many Orthodox Christians joined, because they received help from the Redemptorists – who never left the city. – and decided to stay.

In order to provide this help, the local community has received help from Redemptorists around the world, “and this keeps us going.” He was personally in contact with the communities in Ireland and Spain, but many others provided help, especially the Redemptorists in Poland.

He said they all appreciate the humanitarian aid they have received because it shows “that community, that support, that love. And because when they pass it on to us, we can give it directly to our people.

In tears, Kchik also recounted the months of work at the Frankivsk monastery, where they were able, at different times, to accommodate three orphanages. Most of these children are technically not orphans, but have been taken from their families by the state due to abusive home lives.

The first group stayed the longest and included children aged from a few months to 15 years old. They had traveled several days together, and when they arrived, the older ones were taking care of the younger ones.

“The way they cared for each other reminds us that even in this horrible situation, you can see that love, hope, joy comes out in the smallest of things,” he said. -he declares. On Easter Sunday, the day before the children left, 21 of them were baptized at the same time. Their kindergarten workers and some of the parishioners became godparents, and to this day they have stayed in touch, with the adults calling the children on their birthdays and just to check in.

“And it’s so important for kids to have that connection, someone who cares about them now, calls them,” Kchik said. “The happiness in the voices of these children when they tell me that their godparents called them, is something that nothing can destroy.”

But what makes her voice break is the story of an “old lady” and a “metal tea caddy full of sweets,” in Frankivsk. When someone came to ask them for humanitarian aid and the priests saw a child or an elderly person, they would open the box and offer a candy.

“This old lady came in once and I grabbed the box…because everyone knows what’s in it,” he said. “And she pulls out these little candies, which are almost like a cough drop, for me to give to the kids. “Our neighborhood store has finally reopened,” she told me.

“She suffered a lot and she has nothing. But her first wish was to let the kids know that things are getting better,” Kchik said.