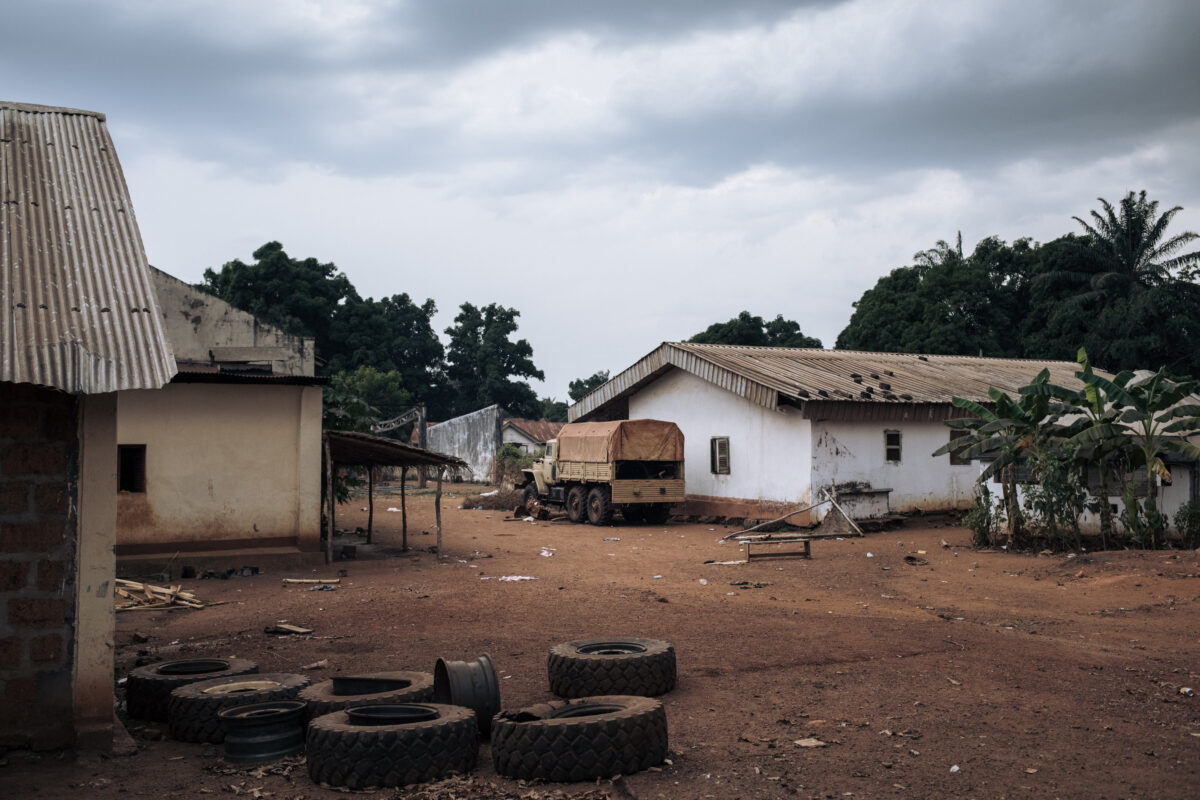 JOHANNESBURG, South Africa – They are named after one of the world’s greatest composers, but the orchestra they have led in Africa for five years has wreaked death and destruction as they fought to support dictatorships and kleptocracies, in exchange for gold, diamonds and other mineral wealth.

President Vladimir Putin has always denied that the Wagner Group is controlled by the Kremlin, insisting that they were “private military contractors” providing “security” and “advice” to governments and armies and protecting Russian “assets”.

Western governments say Wagner is, in effect, Putin’s private army, tasked with doing his “dirty work” under the guise of being an independent consultancy and thus giving the Kremlin plausible denial.

Wagner’s mercenaries have been accused of committing war crimes, including torture, murder and rape, wherever they have been deployed so far, including in the Central African Republic (CAR), Libya, in Mali and Mozambique.

But now, according to several members of African and international intelligence agencies and foreign missions across the continent, Putin’s war in Ukraine has severely eroded Wagner’s presence in Africa.

The intelligence community in Africa claims that at one time Wagner had between 20,000 and 30,000 mercenaries on the continent. That number, they believe, has now dropped to 5,000.

“The others went to Ukraine. It really exposed them on multiple African fronts,” Jasmine Opperman, a South African security consultant specializing in extremism, told The Epoch Times.

“The withdrawal of Wagner’s forces from Africa since Putin invaded Ukraine has shown that Wagner is completely under the control and command of the Kremlin,” Opperman said.

A West African intelligence operative who spoke to The Epoch Times said, “In late March and early April, when it became clear that Putin wouldn’t get the quick victory he was expecting, the Wagner guys just started to fade away. They had clearly been ordered to go to the front lines of Ukraine.

On August 8, the Biden administration said the Russian death toll in Ukraine could reach 75,000. He added that up to a quarter of Moscow’s casualties since the war began were “mercenaries,” and that an estimated 5,000 Wagner agents had been killed in Ukraine so far.

The Kremlin called these tolls “lies and propaganda”. He insists that only around 1,300 Russians died in the conflict.

Marisha Ramdeen of the ACCORD group, which monitors terrorism and violence in Africa, told The Epoch Times that Wagner’s “minimal” forces remaining in Africa are “increasingly isolated and vulnerable.” From my information, they’re keeping a low profile, they’ve got to have some kind of a cop-or-death strategy, and they can’t exactly have the kind of fiery attitude they used to have. They no longer have weapons or manpower, because everything is now in Ukraine. They are blocked.

In the CAR, they say, Wagner’s agents fought off local smugglers and now control illicit diamond and gold mining in some areas.

In Mali, the remaining mercenaries are also involved in gold mining.

“The remaining Wagners are now mining gold in northern Sudan,” an East African intelligence official told The Epoch Times. “They share the gold with the local warlords.”

The Wagner Group gained international notoriety in the early months of the war in Ukraine, when that country’s intelligence services said Wagner members were responsible for “war crimes”, including roadside executions of unarmed civilians and rapes of women and girls in Bucha, near Kyiv. Moscow has denied the allegations.

Washington began paying attention to Wagner’s activities in Africa long before the war in Ukraine, but this event sharpened its attention.

The Combating Malicious Russian Activities in Africa Act passed the House of Representatives on April 27 by a massive, bipartisan majority of 419 to 9, and will become law if passed by the Senate.

The bill defines malign activities as those that “undermine the objectives and interests of the United States” and it seeks to “hold accountable the Russian Federation and African governments and their officials who are complicit in such influence and activities.” malevolent”.

“The bill is clearly designed to target Wagner and Russian companies and oligarchs involved in illicit mineral extraction in Africa,” Professor Dirk Kotze, a policy analyst at the University of South Africa, told Epoch. Times.

“Most African governments want nothing to do with Wagner. Through the African Union, they have made it clear that African problems should be solved by Africans, not by foreign mercenaries.

According to the Center for Strategic and International Studies (CSIS), the Kremlin first deployed Wagner fighters during its annexation of Crimea in 2014.

Wagner’s next appearance was in Syria, where he helped Bashar al-Assad’s regime defeat the Islamic State. But his main mission appears to have been to reclaim the oil and gas wells, with Assad later giving Wagner a stake in the wealth. In July 2017, a video emerged showing Wagner fighters assaulting and beheading a “Syrian army deserter” in the Palmyra area.

He named his Putin-sanctioned band of mercenaries after his “military call sign”, Wagner, after Richard Wagner, Hitler’s favorite composer. Social media posts, since deleted, showed Utkin sporting Nazi tattoos, including the Third Reich eagle on his chest and the insignia of Hitler’s notorious Reichsadler and Sturmabteilung units.

Several international intelligence agencies, including the CIA, claim that Wagner is funded by Yevgeny Prigozhin, an oligarch and self-described “political adviser” to Putin.

“As France, once the greatest colonial force in Africa, retreated from the continent, Wagner settled there,” Fabricius told The Epoch Times.

The overwhelming majority of Wagner’s operations in Africa are in conflict-ridden but resource-rich former French colonies with weak and corrupt governments battling Islamist terrorists.

The Russian “company” began establishing a presence in the CAR in 2017, after French forces prematurely declared victory over the jihadists and left. Early last year, a deployment of 2,000 men from Wagner prevented the ousting of President Faustin-Archange Touadéra by a rebel coalition.

“At first, the Russians were well received by the Central African people as they undoubtedly restored the most stability to the country for many years. Forces from France and South Africa failed to do so,” Fabricius said.

But Wagner’s fighters quickly lost popularity because, according to the United Nations, they committed serious human rights abuses against ethnic groups perceived to oppose Touadera.

In May of last year, a report by Human Rights Watch (HRW) said Wagner’s “mercenaries” were responsible for several “massacres” in the CAR.

In the report, witnesses described how “Russians” erected a roadblock near the town of Bossangoa on the morning of July 21, 2021, arresting 13 unarmed men on motorbikes, severely assaulting and executing them. Most of the bodies were “thrown” into a shallow trench near the road.

The United Nations Working Group on the Use of Mercenaries wrote to Touadera in September, saying “Russian military and security personnel” were responsible for the atrocity. The president promised an “investigation” but nothing came of it.

“The CAR government refuses to recognize Wagner’s official presence, and if there is a contract between him and the band, it is secret,” Fabricius said. “So there were a lot of rumors that the government would pay Wagner through mining contracts, and that’s actually the case in several African countries, like Sudan.”

The CAR is one of the most mineral-rich places on the planet, mining gold, diamonds, copper, tin and uranium.

Wagner was particularly active in Africa in 2019, but did not fulfill many of his “official” assignments. It sent about 200 fighters to Mozambique’s oil and gas-rich Cabo Delgado province, ostensibly to help government forces fight an Islamic State-sponsored insurgency. But a few months later they withdrew, after the rebels had killed seven Wagnerian soldiers.

In Libya, Wagner’s forces supported a rebel attack on the capital, Tripoli. He failed to overthrow the government, but his “advisors” remain in the country.

In Sudan, another oil-rich country, Wagner failed to prevent the overthrow of dictator President Omar al-Bashir. He remains in the country at the request of the powerful military commander General Mohamed Hamdan.

In December last year, 800 Wagnerian fighters joined the battle against Islamist insurgents in Mali; the UN and human rights groups have since blamed them for the deaths of around 500 “innocent civilians”.