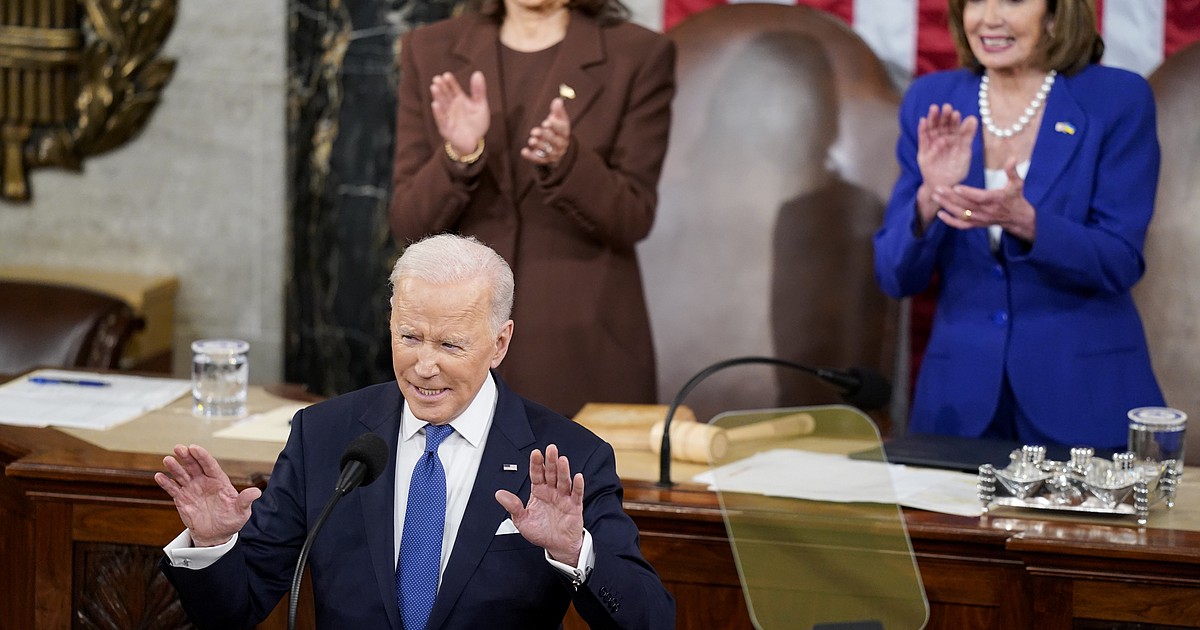 WASHINGTON (AP) — Addressing a worried nation and an anxious world, President Joe Biden pledged in his first State of the Union address Tuesday night to check Russian aggression in Ukraine, to tame soaring US inflation and deal with the waning but still dangerous coronavirus.

Biden said he and all members of Congress, regardless of their political differences, are united “with an unwavering determination that freedom will always triumph over tyranny.” He asked lawmakers thronging the House chamber to stand up and wave to Ukrainians as he began his speech. They stood up and clapped.

It was a remarkable show of unity after a long year of bitter acrimony between Biden’s Democratic coalition and the Republican opposition.

Biden’s 62-minute speech, which was torn between war attention abroad and worries at home, reflected the same balancing act he now faces in his presidency. He must muster Allied resolve against Russian aggression while dealing with inflation, COVID-19 fatigue and declining approval ratings as the midterm elections approach.

Biden highlighted the bravery of Ukrainian defenders and the commitment of a newly reinvigorated Western alliance that has worked to rearm Ukraine’s military and cripple Russia’s economy through sanctions. He also warned of costs to the US economy, but ominously warned that without consequences, Russian President Vladimir Putin’s aggression would not be limited to Ukraine.

“Throughout our history, we’ve learned this lesson – when dictators don’t pay the price for their aggression, they cause more chaos,” Biden said. “They keep moving. And the costs and threats to America and the world keep mounting.”

As Biden spoke, Russian forces were stepping up their attacks in Ukraine, after bombing the central square of the country’s second-largest city and Kiev’s main TV tower, killing at least five people. The Babi Yar Holocaust Memorial was also damaged.

Biden announced that the United States was following Canada and the European Union in banning Russian planes from its airspace in retaliation for the invasion of Ukraine. He also said the Justice Department was launching a task force to prosecute the crimes of Russian oligarchs, whom he called “corrupt leaders who have cheated billions of dollars from this violent regime.”

“We are coming for your ill-gotten gains,” he said, promising that American and European allies were coming after their yachts, luxury apartments and private jets.

“Putin can surround Kiev with tanks, but he will never win the hearts and souls of the Ukrainian people,” Biden said. “He will never quench their love of freedom. He will never weaken the resolve of the free world.”

Even before the Russian invasion sent energy costs skyrocketing, prices for American families had risen, and the COVID-19 pandemic continues to hurt families and the country’s economy.

Biden outlined plans to fight inflation by reinvesting in U.S. manufacturing capacity, speeding up supply chains and reducing the burden of childcare and elder care for workers.

“Too many families are struggling to pay the bills,” Biden said. “Inflation robs them of the gains they might otherwise feel. I get it. That’s why my top priority is getting prices under control.”

Biden entered the House chamber without a mask, reflecting the drop in the number of coronavirus cases and new federal guidelines intended to bring the public back to pre-pandemic activities. But the Capitol was newly fenced due to security concerns after last year’s insurgency.

In the face of domestic disquiet and danger abroad, the White House had framed Tuesday night’s speech as an opportunity to highlight the improving outlook for the coronavirus, rebrand Biden’s domestic policy priorities, and show a path to lower costs for families struggling with runaway inflation. But it took on new meaning with Russia’s invasion of Ukraine last week and Putin’s nuclear saber-blows.

As usual, a Cabinet secretary, in this case Commerce Secretary Gina Raimondo, was kept in a safe place during the address, ready to take power in the event of a disaster.

In an interview with CNN and Reuters, Ukrainian President Volodymyr Zelenskyy said he urged Biden to deliver a strong and “helpful” message on invading Russia. In a show of unity, Ukrainian Ambassador to the United States Oksana Markarova joined First Lady Jill Biden in the gallery.

In a rare jarring moment, Rep. Lauren Boebert of Colorado shouted that Biden was to blame for the 13 service members who were killed during the chaotic U.S. withdrawal from Afghanistan last August.

“You put them in. Thirteen of them,” Boebert shouted as Biden mentioned his late son Beau, a veteran who died of brain cancer and served near toxic military homes, widely used in Iraq and in Afghanistan. Biden is pursuing legislation to help veterans suffering from exposure and other injuries.

Rising energy prices following Russia’s war in Ukraine are likely to exacerbate inflation in the United States, which is already at its highest level in 40 years, to eat into people’s incomes and threaten economic recovery after the pandemic. And while the crisis in Eastern Europe may have helped ease partisan tensions in Washington, it has not erased the political and cultural discord that casts doubt on Biden’s ability to deliver on his promises.

An AP-NORC poll from February found that more people disapproved than approved of how Biden handled his job, 55% to 44%. That’s down from a favorable rating of 60% last July.

Ahead of the speech, White House officials acknowledged the country’s mood was “sour”, citing the lingering pandemic and inflation. Biden, used his remarks to highlight the progress made a year ago – with the majority of the US population now vaccinated and millions more people back to work – but also acknowledged that the job was not yet done, a recognition of American discontent.

Before Biden spoke, House Republicans said the word “crisis” described the state of the union under Biden and the Democrats — from an energy policy that allows Russia to sell oil to abroad to domestic challenges regarding employment and immigration.

At least half a dozen lawmakers, including Reps. Jamie Raskin and Pete Aguilar, both members of the committee investigating last year’s Capitol riot, and Sen. Alex Padilla, D-California, had tested positive for COVID-19 and were not expected at the Capitol for the speech.

“Tonight I can say we are moving forward safely, back to more normal routines,” Biden said, outlining his administration’s plans to continue to fight COVID-19 and saying “It’s time for Americans to get back to work and fill our great city centers again.” He announced that people will be able to order another round of free tests from the government and that his administration was launching a “test to treat” initiative to provide free antiviral pills at pharmacies to those who test positive for the virus.

While his speech to Congress last year saw the rollout of a massive social spending package, Biden this year has largely repackaged past proposals in search of workable measures he hopes can win support. bipartisanship in a bitterly divided Congress ahead of the election.

The president also pointed to investments in everything from high-speed internet access to building bridges from November’s $1.2 trillion bipartisan infrastructure bill as an example of government achieving a consensus and bringing change for the nation.

He also called on lawmakers to compromise on rival competitiveness bills that have passed the House and Senate, both intended to revitalize American high-tech manufacturing and supply chains in the face of threats. China’s growing geopolitics.

“Instead of relying on foreign supply chains, let’s do it in America,” Biden said.

As part of his speech to voters, he also placed new emphasis on how proposals such as the extension of the child tax credit and the reduction of childcare costs could provide relief to families. as prices rise. It was said that his proposals on climate change would reduce costs for low- and middle-income families and create new jobs.

He proposed mental health initiatives that dovetail with growing bipartisan interest in Congress amid evidence that the pandemic has damaged the national psyche, and discussed new ways to improve access to health benefits for veterans sickened by exposure to burning garbage while on duty.

Biden also called for action on voting rights, which failed to garner GOP support. And as gun violence escalates, he returned to calls to ban assault weapons, a direct request he hadn’t made in months. He called for “funding the police with the resources and training they need to protect our communities.”

Additionally, Biden led Congress in a bipartisan tribute to retired Supreme Court Justice Stephen Breyer and pressed the Senate to confirm that Federal Justice Ketanji Brown Jackson would be the first black woman on the High Court to replace him. He named her last week.