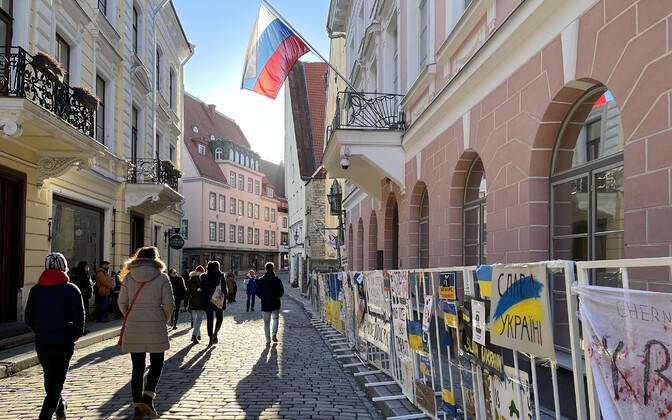 Undersecretary Rein Tammsaar met with Ambassador Vladimir Lipaev to express regret over Putin’s statement, including his comments about the Estonian town of Narva. See below.

At a time when Russia is implementing its revanchist policy informed by Russian World (Russkyi Mir) ideology trying to destroy the Ukrainian state and people, this is also completely unacceptable, according to a statement.

In view of Russia’s aggression against Ukraine, the bill submitted to the Duma this week proposing to cancel the regulation recognizing the independence of Lithuania and the threats of “denazification” and “demilitarization” against other countries are dangerous and irresponsible, Tammsaar said.

“Instead of fighting for respect for international law and basing its actions on the principle of sovereignty and territorial integrity of states, Russia has tried to use propaganda in addition to the military to implement its imperialist ambitions, including by falsifying history. This approach is doomed to failure and may possibly threaten Russia itself,” a ministry statement said.

Estonia called on Russia to immediately withdraw its forces from Ukraine, end hostilities and respect Ukraine’s sovereignty and territorial integrity within its internationally recognized borders.

What did Putin say about Narva?

Addressing young entrepreneurs, engineers and scientists attending the St. Petersburg International Economic Forum on June 9, Putin paid tribute to Tsar Peter the Great on the 350th anniversary of his birth, drawing a parallel between what he described as their twin historic quests to reclaim Russian lands.

In televised comments on Day 106 of his war in Ukraine, he compared Peter’s campaign to the task Russia faces today, Reuters reported.

“Peter the Great waged the Great Northern War for 21 years. At first glance he was at war with Sweden, which took something away from him… He took nothing away, he came back. areas around Lake Ladoga, where St. Petersburg was founded. When he founded the new capital, none of the European countries recognized this territory as part of Russia, everyone recognized it as part of Sweden. However, at all times, the Slavs lived there together with the Finno-Ugric peoples, and this territory was under the control of Russia, so is the western direction, Narva and its first campaigns. He was coming back and getting stronger, that’s what he was doing.

Narva is the easternmost town in Estonia and has a large Russian-speaking population. Narva and the Russian city of Ivangorod are separated by the Narva River.

By the way, Putin mentions the city of Narva. This is the East of Estonia, that is to say the territory of NATO. https://t.co/4UqNgYtWz4

What did the Duma say about Lithuania?

A bill submitted to the Russian State Duma called for the repeal of the resolution of the State Council of the Soviet Union “On the recognition of the independence of the Republic of Lithuania”, the public channel reported. LRT earlier this week.

The bill was drafted by a member of the United Russia party, Evgeny Fedorov.

The bill follows a May resolution by Lithuania’s parliament, Seimas, recognizing Russia’s war on Ukraine as genocide and Russia as a terrorist state.