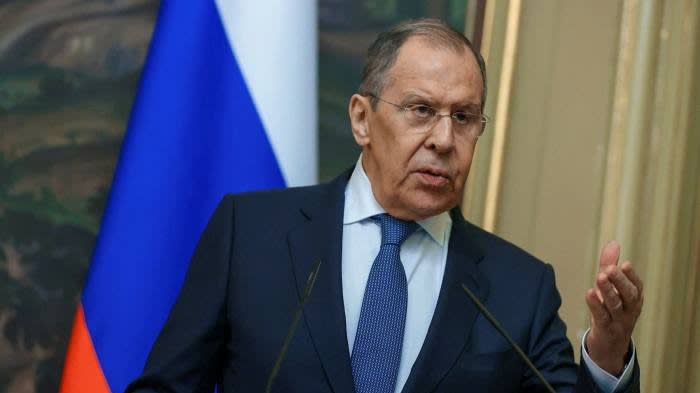 Hello. This article is an on-site version of our FirstFT newsletter. Subscribe to our Asia, Europe/Africa Where Americas edition to send it straight to your inbox every weekday morning

Russia has signaled its readiness to continue talking to the West about its security concerns, raising hopes that it wants to defuse a Ukraine crisis that has raised the prospect of war in Europe.

In a televised one-on-one meeting with President Vladimir Putin, Russian Foreign Minister Sergei Lavrov said diplomatic engagement with the West must continue and he could see a way to advance the talks.

Asked by Putin about the likelihood of a security deal with the West over Ukraine and NATO, Lavrov replied: “There is always a chance.”

Pentagon press secretary John Kirby said Lavrov’s comments “seem to indicate that [Putin] still think there is oxygen here for diplomacy. We would welcome a continuation of this path by the Russians. But he said Putin was continuing to “advance his preparation” and “could act with little or no warning”.

Meanwhile, US President Joe Biden and UK Prime Minister Boris Johnson agreed in an appeal that “there remains a crucial window for diplomacy and for Russia to withdraw from its threats to Ukraine”.

Olaf Scholz, the German chancellor who is due to meet Putin for talks in Moscow on Tuesday, stressed that Ukraine’s NATO membership was “not on the agenda” – a message that could be considered as an attempt to address Russia’s security concerns.

Share your thoughts on the Ukraine-Russia conflict with me on [email protected]. I will perhaps present them in a future edition of the newsletter. Thanks for reading FirstFT Asia — Emily

Five other stories in the news

4. The new platoon leader rejects suggestions that the company will be sold Barry McCarthy rejected the idea that the home fitness band could go on sale, instead pledging to continue growing by doubling content, expanding to new countries and increasing its product portfolio.

5. Kamila Valieva will compete in the Beijing Winter Olympics A ruling by the Court of Arbitration for Sport upheld the decision to allow the 15-year-old Russian figure skater to compete while appealing a positive doping test result. She is heavily favored for gold in the women’s individual event, which begins on Tuesday.

Hong Kong’s “Patriots Only” Legislature The group will meet for the first time on Tuesday. On the agenda: Carrie Lam’s administration is seeking a HK$27 billion ($3.5 billion) Covid-19 relief fund.

Industrial production figures in Japan December data is expected to be released on Tuesday.

What else we read

‘Speed ​​dating’ with Xi More than 30 autocrats, democratic leaders and royals met with Chinese leaders on the sidelines of the Winter Olympics. Their warming ties with Beijing clash with US President Joe Biden’s goals of rebuilding US partnerships in response to China’s growing military assertiveness and expanding global influence.

Can Saudi Arabia Become the World’s Leading Hydrogen Producer? A Saudi plan to dominate hydrogen production is part of its bid to diversify its oil and gas-dependent economy and create jobs. But with Russia and the United Arab Emirates among many countries also seeking market share, skeptics wonder if Riyadh can deliver.

How to Help Your Staff Love a Takeover Threat The collapse of SoftBank’s Arm sale to Nvidia ushered in a period of flux for the UK-based chipmaker’s staff. Uncertainty is inevitable with takeovers, but managers can motivate their teams to see the bright side of business, writes Andrew Hill.

Will it really be, finally, “the year of the stockpicker”? As surely as New Year’s resolutions fall by the wayside, January brings declarations that the coming era will be good for stockpickers, writes Robin Wigglesworth. But so far, the first signs are good.

You can’t hide from the jerks at work Are co-workers: a) great because you can bounce their ideas off by heading to a well-ventilated, sanitized bar for a drink on a Thursday night? b) a fatality to tolerate? Or c) total shaking? Social psychologist Tessa West’s new book speaks directly to the fear that c) is the only honest answer.

Food is both personal and universal, so River Café owner Ruth Rogers doesn’t have to work hard to get her topics opened up on her podcast River Cafe Table 4. Although Rogers isn’t the smoothest host, the conversations are intimate, revealing, and real. Read Fiona Sturges’ review here.

Thanks for reading and don’t forget you can add FirstFT to myFT. You can also choose to receive a FirstFT push notification every morning on the app. For more from the Financial Times, follow us on Twitter @financialtimes.

Newsletters recommended for you

FT Asset Management – The inside story of the movers and shakers behind a multi-trillion dollar industry. Register here.

The week ahead — Start each week with an overview of what’s on the agenda. Register here.