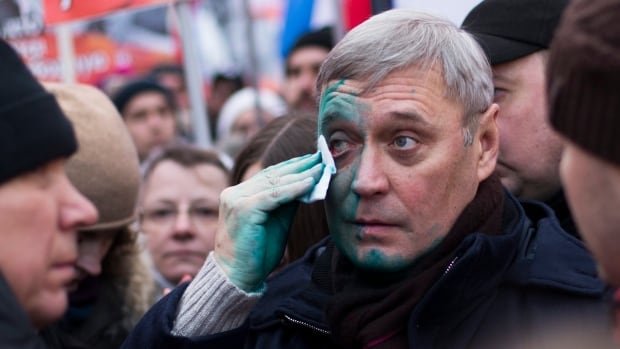 A former Russian prime minister who worked with President Vladimir Putin said he believed the Russian people would begin to doubt the longtime leader once the impact of international economic sanctions was felt deeply in the country.

Mikhail Kasyanov served as prime minister from 2000 to 2004 – some of Putin’s first years as president – but now leads an opposition party in Russia. Kasyanov is currently outside the country to avoid persecution by state authorities.

“Half the population is completely fooled by the propaganda, and that’s why for a while they will continue to believe that Putin is right,” he said in an interview broadcast on Sunday on Rosemary Barton live.

Kasyanov said Putin has changed completely in the two decades since they served in government together.

“He no longer pretends to be a democratically devoted person, he is a real KGB agent [now],” he said.

Kasyanov said he believed that once Putin was seen as defeated in Ukraine, many Russians would begin to doubt his leadership and there could be regime change in the country within two years.

Putin remains popular in Russia, says opinion pollsthough experts are divided on the accuracy of the polls in a country where opposition voices are regularly shut down and suppressed, and where information is tightly controlled.

Ukraine, meanwhile, faces a “rather difficult situation” with regard to its own economic resources, according to its finance minister.

In a separate interview broadcast on Sunday, Serhiy Marchenko told Barton that his country was facing a budget deficit of US$5 billion a month. According to him, this is because Ukraine has lost about half of its income since the start of the war at the end of February.

“We need $5 billion a month for the next three months. We need this bridge to the new normal,” Marchenko said, expressing optimism about the intervention of the international community.

Countries in North America and Europe have already committed billions in loans and grants to Ukraine, with the United States government recently seeking Congressional approval to deploy another 33 billion US dollars in security, economic and humanitarian aid. Canada has offered Ukraine up to approximately C$1.6 billion in loans.

The federal government also recently decided to give itself the power to seize frozen Russian assets and sell them to help fund aid efforts, which Marchenko endorsed.

“I think we can use frozen Russian assets to be seized in ways that help Ukraine rebuild,” he said.

Marchenko called on the international community to act more radically to stop its imports of Russian oil and gas.

Russian energy is increasingly in the crosshairs of Ukraine’s allies; Russia cut gas to Poland and Bulgaria this week, while Germany seeks to accelerate its transition away from Russian energy.

“Russia, unfortunately for us, gets extra money [from energy exports] to cover their war machine,” he said.