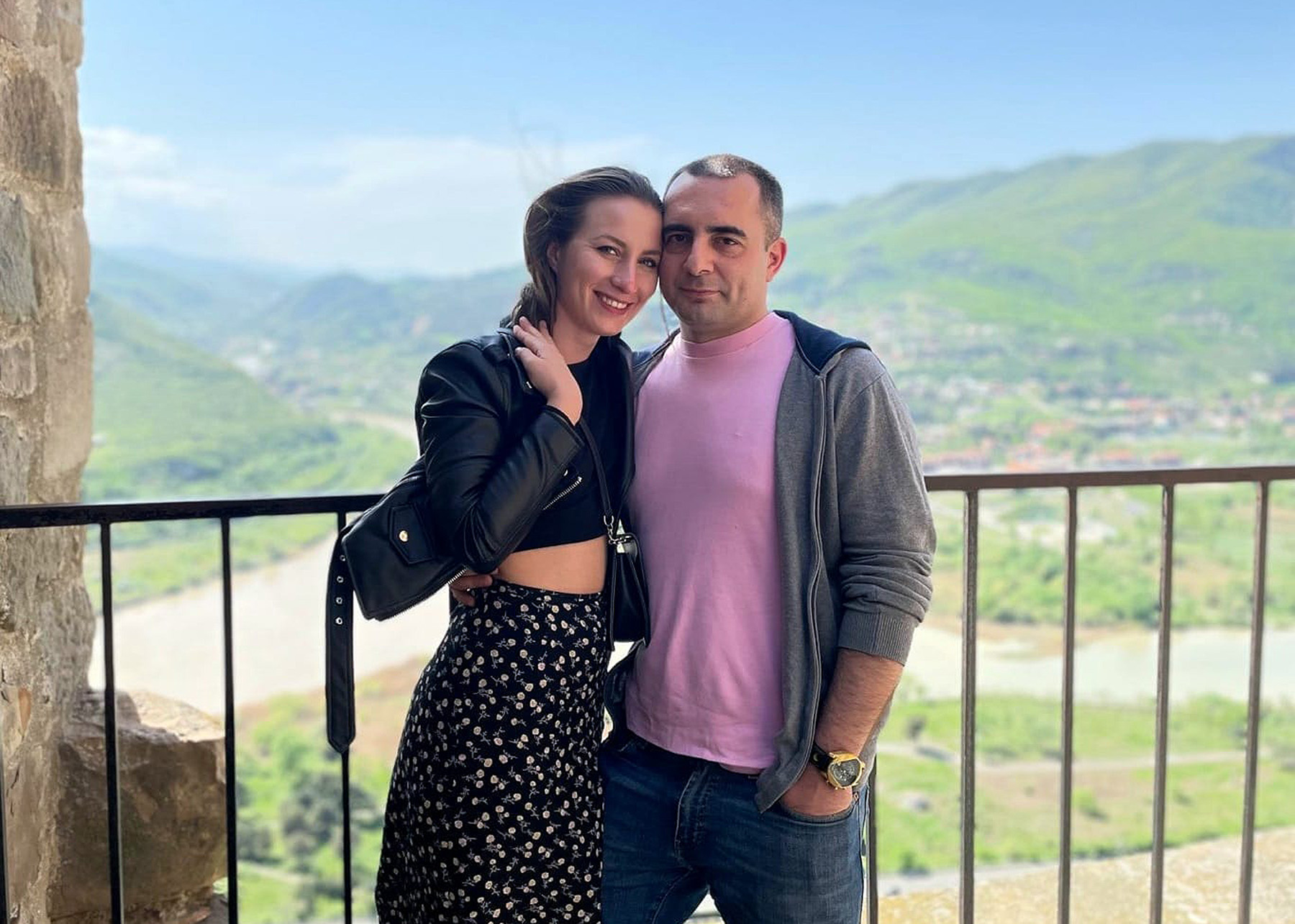 Egor Kuroptev and Anastasia Burakova are a discreet couple in the Georgian capital, where they met in the spring of 2021 and married the following year. Both play an essential role in welcoming and protecting Russian political exiles in Transcaucasia, through the work of the NGOs they lead. This commitment is made essential today by the influx of Russian citizens following the February 24 invasion and, more recently, by the announcement of a partial mobilization of the population.

Fifteenth floor of a building in the Vaké district, on the heights of Tbilisi. Egor is leaning on the balcony, as if looking out over the city. Anastasia begins to speak: “My grandmother was born in Ukraine. Due to decollectivization measures, she was deported to Siberia. This is where I was born and where I spent the first twenty years of my life. At the age of 20, Anastasia went to St. Petersburg to study law. After graduating, she decided to put her skills at the service of civil society. She worked as a human rights lawyer for a pro-democracy organization Open Russia. At the same time, she participated in the creation of the United Democrats, a group supporting opposition candidates in local elections. However, this project was banned in 2020 by the Russian authorities. Moreover, the following year, when a wave of repression struck most of civil society, Open Russia was declared an “undesirable organization”. Anastasia painfully recalls her last months in Russia: “My closest colleague, Andrey Pivovarov, was arrested in May 2021. He has just been sentenced to four years in prison. After his arrest, we continued our work for another two months. Under pressure from the intelligence services, I then decided to emigrate to Ukraine, and I stayed in Kyiv until the start of the war.

Then go Kovcheg (The Ark) supports Russian political refugees on legal, psychological or more practical issues such as housing. In its early days, the organization consisted simply of a Telegram bot and two apartments to house refugees, in Istanbul and Yerevan. Gradually, however, Kovcheg strengthens its network, recruits many volunteers and diversifies its offer of assistance. The organization has also developed a page centralize Russian democratic initiatives, in order to facilitate the involvement of expatriates.

“March 10e, the day I announced on Telegram that we would provide aid to expatriates opposed to the war, we received more than 5,000 requests in one day. Today, more than 70,000 people follow our newsfeed.

The nature of Kovcheg’s support depends on the location and profile of the candidates. For example, in Georgia, Kovcheg does not offer accommodation but only online consultations, because the dissident community is firmly established there. On the other hand, while Armenia and Turkey welcome many Russian political refugees, the latter are in a more precarious situation which requires the provision of material aid on the spot. Additionally, while legislative consultations are open to all, limited housing spaces require Kovcheg’s team to conduct extensive research into the identity of the potential beneficiary. Despite these practical limitations, Kovcheg remains a fundamentally open network, based on mutual aid between the exiles themselves. As Anastasia explains: “We focus our aid on people who have taken a stand against the war, which does not mean that we only support members of opposition political organisations. Many people are under pressure from the authorities after signing a petition against the war, posting on Facebook, sending money to a humanitarian organization… These people have never participated in any organization. They don’t know where to find support, contacts… We also help people in this situation.

“For 19 years, I have done nothing but oppose the regime.”

Egor impresses with his athletic build and slow diction, meticulously choosing his words and the subjects he agrees to discuss. The position he occupies today, as coordinator and public figure of the opposition, carries heavy responsibilities. Since the age of 17, he has been involved in various opposition media and organizations. His career began in the management of the Echo Moscow news radio, and in 2007 he launched his own media start-up project for the VKT AKADO television channel. From 2012, after having directed several media programs in the meantime, he collaborated in Georgia with the leader of the Russian opposition Ksenia Sobchak on a political talk show. Originally, this project was to be carried by a Russian media group. However, increasing pressure from the authorities, making Egor’s work in Russia increasingly difficult, pushed him to look for opportunities outside the country: “No, I was not arrested. But they called everyone, forbidding to collaborate with us and broadcast our projects. It has become impossible to do anything from Russia. From this movement, his activity is entirely relocated to Georgia, where he decides to settle. He defends the European integration of the country and strives to counter the Kremlin’s propaganda in the region, in particular through the television program “Border Zone” which he initiated.

From 2019, the creation by the NGO Free Russia Foundation of a office in Transcausia whose direction is entrusted to Egor Kuroptev, marks a decisive step in his commitment against the regime. In his own words: “The Free Russia Foundation is the leading organization providing assistance to Russian political exiles and opposing the regime’s harmful influence in Transcaucasia and around Russia.” This organization was founded in 2014 in Washington by a group of Russian expatriates, shortly after the invasion of Crimea. The idea was to provide democracy advocates with an accurate analysis of the situation in Russia while building a network of support for Ukraine.

The office in Transcaucasia is proving increasingly indispensable, as the countries of this region, a relatively safe refuge for political exiles, are called upon to welcome a growing number of expatriates. In coordination with local authorities, Free Russia is working to preserve this fragile peace and consolidate the local dissident community. While Kovcheg provides legal and psychological support to political refugees, Free Russia focuses more on security issues, supporting democratic initiatives against Kremlin influence and offering geopolitical expertise to various actors. “We monitor everything in the region, with regard to the Russian and Belarusian exile communities. When possible, we try to prevent rather than cure.

The Kremlin threat knows no borders. According to Egor, FSB agents are deployed throughout the region, collecting information and spreading regime propaganda. While this analysis no doubt applies to Armenia, Russia’s strategic partner in the region (both countries are members of the Collective Security Treaty Organization created in 2002), it also applies to a certain extent to Georgia. . Egor mentions the story of the young Vsevolod Osipov, a member of the Libertarian Party forced by the Russian intelligence services to gather information on the expatriate community in Georgia, before being unmasked and deciding to cut all ties with the Russian authorities. He also mentions the deleterious influence of extremist nationalist Vladislav Poznyakov who, in collaboration with the FSB, allegedly organized a hate campaign aimed at stoking tensions between Russians and Georgians. “Their strategy is always the same: to create chaos. And it works.”

Egor Kuroptev thus appears as a mediating figure between the various actors at stake. His geopolitical expertise and the network he has woven in the region make him the ideal leader to manage the current situation. After spending ten years in the country, regularly participating in humanitarian missions in the occupied areas, he shares the suffering of the victims of the Kremlin: “I understand the resentment of the Ukrainian and Georgian people, because our state is a terrorist state ruled by criminals who should be tried and imprisoned. This regime is a total failure, ruining the future of the Russian people and the perception that the rest of the world has of this community. Everyone is led to believe that the Russians are killers.

Anastasia insists on the shame of Russian citizens regarding the abuses of their government: “Of course, everyone feels ashamed and responsible for this war. We belong to the aggressor country. Our group organizes many online meetings on this subject in collaboration with psychologists. Everyone tries to do something in response to this feeling of shame. I myself always wonder if I did enough when I was still in Russia, if I could have done more against the regime.

“Do something” against shame. Against the system that causes it. What Kovcheg and Free Russia have in common is the desire to continue the fight, to allow expatriates to continue resisting from abroad. “We want to create a community that maintains ties with Russia and continues to fight against the regime and its propaganda. But the people we help must first organize their daily lives and achieve a stable psychological state. Only then can they seek new forms of engagement. It’s a long and complex process.” explains Anastasia.

For several weeks, a banner hung on a balcony in the capital: “Putin kills people in Ukraine while the Russians eat khachapuri in Georgia. “. Faced with this kind of criticism, Egor insists on the difference between “tourists” and dissidents: “I share the anger of the Georgian people who see thousands of Russians coming here to drink wine and enjoy the sea while Russia is occupying Georgia and attacking Ukraine right now. It’s just crazy. But there is also a strong community of Russian citizens here who are working around the clock against the regime, taking part in this war between the civilized world and the Putin regime. As for returning to fight in Russia, that may be a reasonable choice for some people, but we work with journalists, political activists, people who cannot do anything in Russia because their safety is immediately compromised. These militants are much more useful if they leave, if they receive help from another country and find a place to continue the fight. We know that this fight is our responsibility. We do not want to escape our responsibility. But we are of no use if we are arrested or killed. From abroad, we can challenge society, our friends, our fellow citizens. We can try to explain what is happening in the country and oppose propaganda stories. We can help European communities to understand Russia. We can help make the sanctions effective. So we can do a lot at the end, and we do. Today, there are several thousand politically committed people who need support, because without them nothing can change. And one day they will form a new free Russia.