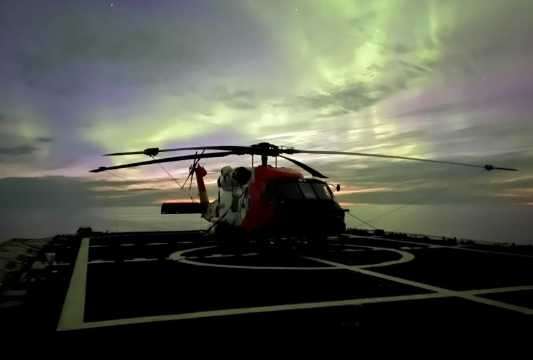 HONOLULU — The Coast Guard Cutter Kimball (WMSL 756), which encountered a formation of Russian and Chinese ships near Alaska in September, returned to its homeport of Honolulu on Friday.

The Kimball and her crew traveled more than 22,000 miles in over 100 days, performing search and rescue and fisheries law enforcement patrols in the Bering and Chukchi Seas, earning the first medal of the ship’s Coast Guard arctic service.

During a routine patrol, the ship encountered a group of Russian and Chinese warships in the Bering Sea. The formation, which transited through the exclusive economic zone of the United States, did not enter US territorial waters. The Kimball approached within about a mile of the warships, established and maintained radio contact and ultimately ensured that their presence was in accordance with international rules and standards.

“As Arctic sea ice melts, the Coast Guard’s presence in the region is critical to keeping increased marine traffic safe, protecting critical resources such as fish stocks, and defending U.S. sovereign interests and the right international,” said Captain Thomas D’Arcy, Commanding Officer of Kimball. “It was an honor to lead Kimball’s crew on this patrol, and we are proud to contribute to a long legacy of essential Coast Guard presence in the Bering Sea and the Arctic.”

Additionally, the Kimball crew supported a long-range helicopter medical evacuation of an injured crew member aboard a bulk carrier, and supported a proof-of-concept trial that involved the use of larger helicopters on national security cutters. Air Station Kodiak crews coordinated with Kimball’s crew, resulting in the first nighttime deployment of a Coast Guard MH-60 Jayhawk helicopter to a national security cutter in the United States. Arctic.

The ship and crews of the Kimball made several visits to remote island and coastal communities, where crew members performed community service and outreach activities, reinforcing the Coast Guard’s commitment to the communities we she serves.

“It was an extremely rewarding experience to serve aboard Kimball on this unique Arctic patrol,” said Ens. Emma Simms, a junior Kimball officer. “I was able to participate in various Coast Guard missions in a single patrol, ranging from boarding fisheries to search and rescue to defending sovereign interests.”

Commissioned in 2019, Kimball is the Coast Guard’s seventh national security cutter. The National Security cutters are 418 feet long, 54 feet wide and have a displacement of 4,600 long tons. With a range of 13,000 nautical miles, advanced technologies in this class are designed to support the national goal of maintaining secure US maritime borders and providing long-range search and rescue capabilities.