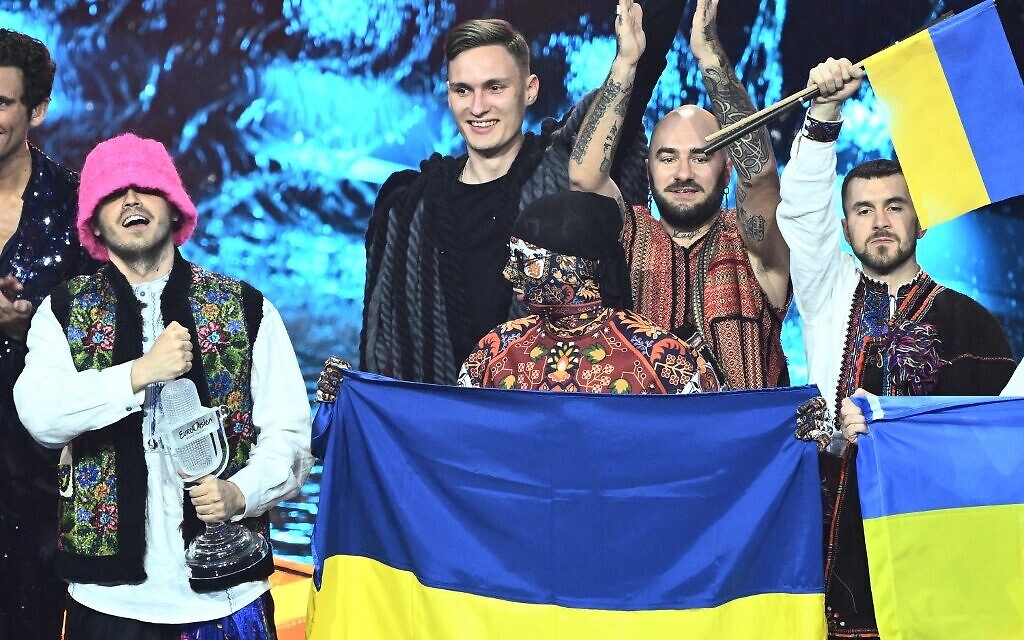 Ukraine won the Eurovision Song Contest on Saturday night, riding a wave of public support across Europe for the beleaguered nation and buoyed by an infectious hip-hop tune.

Kalush Orchestra beat 24 contestants in the finals of the world’s biggest live music event with “Stefania,” a rap lullaby combining Ukrainian folk with the modern beats of an energetic breakdancing band.

“Please help Ukraine and Mariupol! Help Azоvstal now,” frontman Oleh Psiuk implored in English from the stage after their performance was greeted by an enthusiastic audience.

“Our courage impresses the world, our music conquers Europe!” Zelensky wrote on Facebook.

In the Ukrainian capital Kyiv, the triumph was greeted with smiles and visible relief.

“It’s a small glimmer of happiness. It’s very important now for us,” said Iryna Vorobey, a 35-year-old businesswoman, adding that the support from Europe was “incredible”.

Following the win, Psiuk – whose candy pink bob made him instantly recognizable – thanked everyone who voted for his country in the contest, which is watched by millions of viewers.

“The victory is very important for Ukraine, especially this year. Thank you from the heart. Glory to Ukraine,” Psiuk told reporters.

The victory drew praise in unlikely corners as the deputy head of the NATO military alliance said it showed just how much public support ex-Soviet Ukraine has in the fight against Moscow.

“I would like to congratulate Ukraine for winning the Eurovision Song Contest,” Mircea Geoana said as he arrived in Berlin for talks that will focus on the alliance’s expansion in the aftermath of the Kremlin war.

“And it’s not something I do lightly because yesterday we saw the immense public support across Europe and Australia for the bravery” of Ukraine, Geoana said.

British Prime Minister Boris Johnson called the victory “a clear reflection not only of your talent, but of the unwavering support for your fight for freedom”.

And European Council President Charles Michel said he hoped next year’s competition “could be held in Kyiv in a free and united Ukraine”.

Britain comes in second place with “Space Man” by Sam Ryder and its stratospheric notes, followed by Spain with the sexy reggaeton “SloMo” by Chanel.

Britain was in the lead after the national juries’ votes were tallied, but the jaw-dropping 439 points awarded to Ukraine by the public propelled them into first place.

Tapping to traditional Ukrainian folk music but blending an invigorating hiphop beat with a haunting, lullaby chorus, “Stefania” was penned last year by the band’s frontman, rapper Psiuk, 27, as a tribute to his mother. .

But the song chosen to represent Ukraine at Eurovision – just days before the Russian invasion – has taken on outsized significance for a country approaching its third month of war. It contains nostalgic lyrics such as “I will always find my way back even if all the roads are destroyed” and celebrates cultural identity and homeland.

Standing out in the long-acclaimed competition for their flamboyance and camp, the group received a standing ovation on Tuesday after advancing through the semi-finals. He had been seen by bookmakers as a favorite to become the outright winner of Eurovision in Saturday’s final.

“My mother is in Ukraine and a lot of my relatives are in Ukraine but there really is no safe place in Ukraine at the moment,” Psiuk told AFP through an interpreter before the interview. final.

“It’s really like a lottery, where you can’t know exactly where you’re going to put yourself in danger. So we are very worried for everyone and our loved ones who are in Ukraine.

Such concerns fueled the band’s momentum during Eurovision, he said.

Congratulations to Ukraine and the Kalush Orchestra – the winners of the #Eurovision Song Contest 2022! ???????????? Listen to their winning song Stefania and the other 39 amazing songs from this year’s competition here: https://Eurovision.lnk.to/ESC2022

“We feel like we’re on a mission here because right now, as we speak, Ukrainian culture is being destroyed,” Psiuk said.

“But it’s our role to show that he’s alive and has a lot to offer. It’s unique. It really represents every Ukrainian who is suffering now in today’s world.

This year, the European Broadcasting Union banned Russia from participating in the contest a day after it invaded Ukraine on February 24. Russia has participated in Eurovision since 1994.

Perhaps the most original and energizing act of this year’s competition, the six-member male Kalush Orchestra stems from Psiuk’s original hip-hop group, Kalush, named after his hometown in the UK. western Ukraine.

Members of the group “Kalush Orchestra” perform on behalf of Ukraine during the Eurovision Song Contest 2022 final on May 14, 2022 at Pala Alpitour in Turin. (Marco BERTORELLO / AFP)

Its new sound incorporates traditional folk instruments, including the telenka, which is played with one hand controlling the open end of the pipe, and another flute-like instrument, the sopilka.

To win Eurovision, Kalush Orchestra was chosen from among 24 other finalists competing on Saturday. Votes are cast by a mix of music industry professionals and the public from each country – who are not allowed to vote for their own nation. 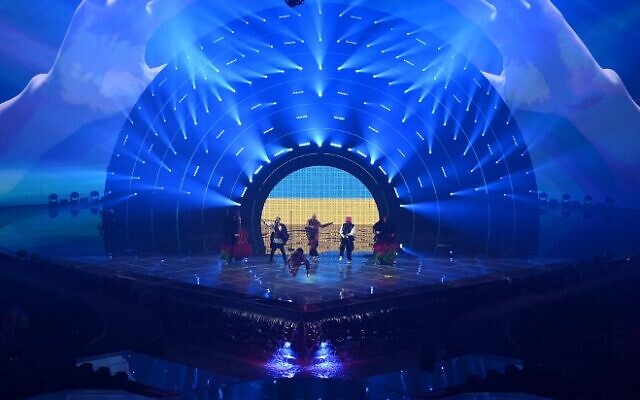 Members of the band ‘Kalush Orchestra’ perform on behalf of Ukraine during the Eurovision Song Contest 2022 final on May 14, 2022 at Pala Alpitour in Turin. (Marco BERTORELLO / AFP)

With Ukraine’s victory, next year’s Eurovision is set to be held in the country, which Psiuk promised will be a “new, integrated, well-developed and flourishing Ukraine”.

Although a member of the group who joined the army three days after the invasion remains in Ukraine to defend Kyiv, the Ukrainian government granted the group special dispensation to travel abroad to participate in Eurovision.

“That’s why we want to be as helpful to our country as possible,” Psiuk told reporters. “Representing your country is responsible at all times, but representing it in times of war is…maximum responsibility for us.”

Psiuk says the group will return to Ukraine right after Eurovision.

As their press release written before the contest explained: “They will be cleared to leave for the finals on May 14 but must return as men of fighting age the following day.”