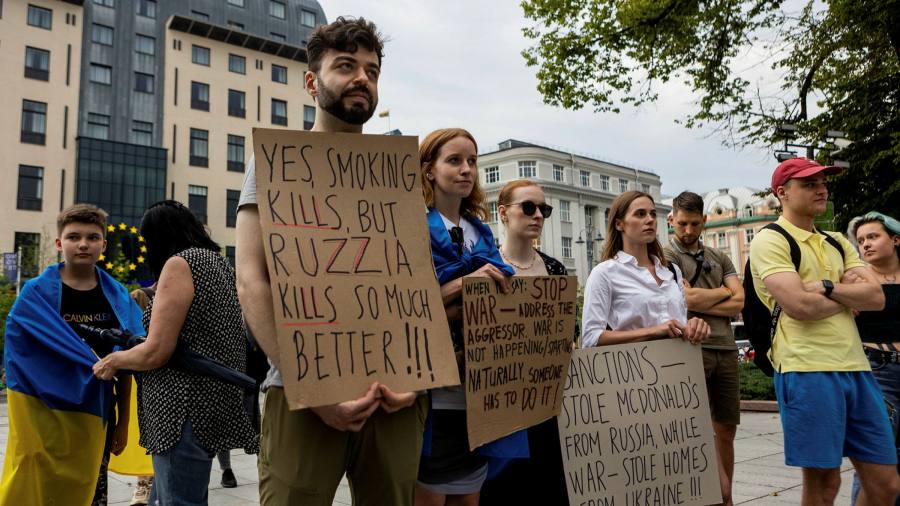 From their top-floor apartment, Lithuanian couple Vidas and Andželika Micuta can watch soldiers patrol across the fenced stream that separates their country from the Russian enclave of Kaliningrad.

“Before, we felt good here, because there are no passing cars and no other noise when we live so close to the Russian border,” said Andželika Micuta. “But clearly that feeling has changed.”

Her husband, a carpenter, has already spent months outside Lithuania fitting out cruise ships in shipyards around the world. But after Russia’s full invasion of Ukraine in February, “it wasn’t fair to be away from my family anymore,” he said, so he found work there.

The sleepy town of Kybartai has become a flashpoint in the escalating conflict that threatens to spill over Ukraine’s borders thanks to its position as a gateway to Kaliningrad, a small, heavily militarized part of Russian territory separated from the rest of the country.

Lithuania, the southernmost of the three former Soviet Baltic states, has been the target of some of Russia’s most brutal retaliatory threats for its enforcement of EU sanctions around Kaliningrad, which Moscow has called a blockade.

Two weeks ago, after Lithuania extended the list of goods that Russia could no longer transport through its territory – in accordance with updated sanctions agreed in Brussels – Nikolai Patrushev, the head of the Russian Security Council, said traveled to Kaliningrad and threatened a “serious negative impact on the population of Lithuania”.

His words were interpreted as a warning that the Russian military could cut off a 60-mile corridor, known as the Suwałki Gap, which connects Lithuania to Poland and the rest of the EU. In response, NATO agreed last week to significantly strengthen its military presence in the Baltic region and pledged to protect NATO member Lithuania.

Lithuanian officials insist they have not strangled Kaliningrad, which Russia is also able to supply by sea and air. Since the war in Ukraine broke out, the largest railway seizure in Lithuania has been a shipment of mislabeled wooden products.

“We untied four wagons and turned them around,” Laimis Žlabys, head of the Lithuanian customs control division, said in an interview in Vilnius, the Lithuanian capital. “We apply all the necessary controls. . . but to speak of Lithuania making a complete blockade of Kaliningrad is not true.

Across Lithuania, along the rail line that connects Kaliningrad with Moscow-allied Belarus and mainland Russia, builders are erecting a concrete structure to house an X-ray machine capable of scanning trains even when they pass.

Workmen began pouring concrete in March, but officials insisted the new £3.2million surveillance system at Kena railway station was originally bought to tackle smuggling at the border from Belarus. “Before, we were here mainly to stop cigarette smuggling, but now we have to work on sanctions,” said Algis Žioba, the local customs chief.

Since March, the flow of Russian freight trains passing through Lithuania has reduced to a minimum. There are days without a single convoy, and those who cross are thoroughly inspected, even when they return empty from Kaliningrad.

German Chancellor Olaf Scholz on Thursday called for “de-escalation momentum” on the dispute, suggesting Lithuania was overdoing its monitoring of “traffic between two parts of Russia”. But former President Dalia Grybauskaitė has led Lithuanian complaints about the EU’s hesitation over sanctions.

In Vilnius, the authorities have taken to posting anti-Russian messages, a sign of the anger fueled by the war. The town hall hoisted a banner telling Russian President Vladimir Putin that “The Hague is waiting for you”, a reference to the International Criminal Court which prosecutes war crimes, while the road which houses the Russian embassy was renamed Rue des “Ukrainian heroes”. On the road to Belarus, a sign indicates that “Minsk, occupied by the Kremlin” is 100 miles away.

During a demonstration of solidarity with Ukraine in the capital, Oleg Šurajev, a Lithuanian comedian who crowdfunded to buy military equipment for Ukraine, recalled that when Russia invaded the Ukrainian peninsula of Crimea in 2014, “we just waved a finger”. This time, he argued, “we need to completely disconnect Russia, block Kaliningrad and make sure Europe stops buying Russia’s dirty oil.”

Saulė Juknevičiūtė, a project manager born a month after the fall of the Berlin Wall in 1989, grew up with “a different vision” from that of Lithuanians raised under the Soviet Union. Yet it has always been wary of a Russian neighbor that has deployed nuclear-capable missiles and stationed its Baltic fleet in Kaliningrad. “We always understood that Kaliningrad was not there to make us feel safe,” she said.

However, in the Lithuanian border towns, the inhabitants also have other worries, in particular the absence of tourists.

“Economic survival is as important as politics,” said Jolita Bakšaitė, a local tourism official. “We try to tell tourists that it is safe to come and that we are protected by NATO, but those who only watch television news are afraid.”

Despite the heightened tensions, there are no military vehicles on the border roads, which are used by Lithuanians traveling to Poland to buy cheaper beer.

Russian warmongering has puzzled many locals, but less so their children. At the edge of a lake separating Russia and Lithuania, a child spotted a fishing boat and asked if it was Russian. Her friend said, “No, stop worrying, he’s one of us. 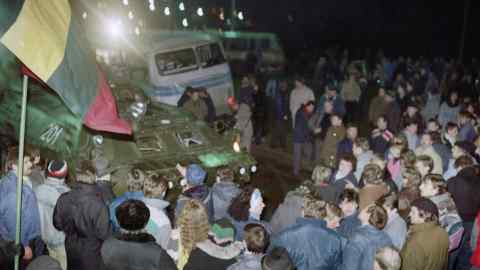 On the outskirts of Kybartai, Russian trucks wait in a parking lot whose fence is adorned with photos of atrocities in Ukraine.

“We wanted this photo exhibition to raise awareness, including those traveling back and forth from Kaliningrad who might not be informed about what is happening in Ukraine,” said Andželika Micutienė, who runs the Kybartai Cultural Center. “Unfortunately, I saw Russian truckers smiling or sharing insults about these photos, like it was funny.”

During the demonstration in Vilnius, Šarūnas Ve, 31eErcaucas admitted that “I sometimes have doubts” about NATO’s willingness to engage Russia.

He added: “We all know that the Americans promised to help us against the Russians at the end of the Second World War – and then did nothing – but I see no choice but to trust. “