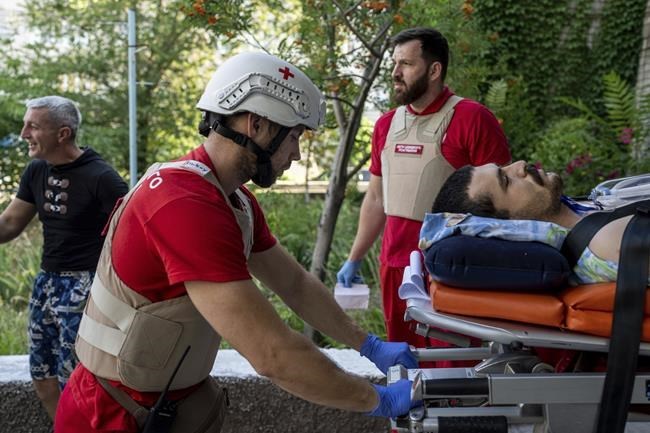 KYIV, Ukraine (AP) — Powerful explosions rocked a Russian air base in Crimea and sent towering clouds of smoke across the landscape on Tuesday in what could mark an escalation in the war in Ukraine. At least one person was killed and several others were injured, authorities said.

The Russian Defense Ministry denied that the Saki base on the Black Sea had been bombed and said instead that munitions had exploded there. But Ukrainian social media was abuzz with speculation that he was hit by long-range missiles fired by Ukraine.

Videos posted to social media showed sunbathers on nearby beaches fleeing as huge flames and columns of smoke rose on the horizon from multiple points, accompanied by loud booms. Crimea Today News said on Telegram that witnesses reported a fire on a runway and damage to nearby homes following what he said were dozens of explosions.

Russian state news agency Tass quoted an unidentified ministry source as saying the main cause of the explosions appeared to be a “violation of fire safety requirements”. The ministry said no warplanes were damaged.

A presidential adviser, Oleksiy Arestovych, cryptically said in his regular online interview that the explosions were caused either by a Ukrainian-made long-range weapon or by partisans operating in Crimea.

During the war, Russia reported numerous fires and explosions at ammunition storage sites on its territory near the Ukrainian border, blaming some of them on Ukrainian strikes. Ukrainian authorities have mostly remained silent on the incidents.

If Ukrainian forces were, in fact, responsible for the explosions at the air base, it would be the first known major attack on a Russian military site on the Crimean peninsula, which the Kremlin annexed in 2014. A small explosion on last month at the headquarters of the Russian Black Sea Fleet in the Crimean port of Sevastopol was blamed on Ukrainian saboteurs using a makeshift drone.

Russian warplanes used the Saki base to strike areas of southern Ukraine on short notice.

One person was killed, Crimean regional head Sergei Aksyonov said. Crimean health authorities said nine people were injured, one of whom remained hospitalized. Others were treated for cuts caused by shards of glass and released.

Officials in Moscow have long warned Ukraine that any attack on Crimea would trigger massive retaliation, including strikes on “decision-making centers” in Kyiv.

For his part, the Ukrainian president pledged to take back Crimea from Russia.

“This Russian war against Ukraine and against all of free Europe began with Crimea and must end with Crimea – its liberation,” President Volodymyr Zelenskyy said in his nightly video address on Tuesday. “Today it is impossible to say when this will happen. But we are constantly adding the necessary elements to the formula for the liberation of Crimea.”

Earlier on Tuesday, Ukrainian officials reported that at least three Ukrainian civilians had been killed and 23 injured by Russian shelling in 24 hours, including an attack not far from the Russian-occupied Zaporizhzhia nuclear power plant.

The Russians fired more than 120 rockets at the town of Nikopol across the Dnieper from the factory, Dnipropetrovsk Governor Valentyn Reznichenko said. Several apartment buildings and industrial sites were damaged, he said.

Ukraine and Russia have accused each other of bombing the power station, Europe’s largest nuclear plant, stoking international fears of a disaster.

The governor of the region where the plant is located, Oleksandr Starukh, said Tuesday that radiation levels were normal. But he warned that an accident could spread the radiation no matter which direction the wind is blowing, carrying it to Moscow and other Russian cities.

A Russian-installed official in the partially occupied region of Zaporizhzhia said an air defense system at the plant would be reinforced following last week’s shelling. Evgeny Balitsky, head of the Kremlin-backed administration, told Russian state television that power lines and other damaged parts of the plant had been restored.

In recent weeks, the Ukrainians have launched counterattacks in Russian-occupied areas in southern Ukraine while trying to repel Kremlin forces in the industrial Donbass region to the east.

Follow AP’s coverage of the war in Ukraine at https://apnews.com/hub/russia-ukraine