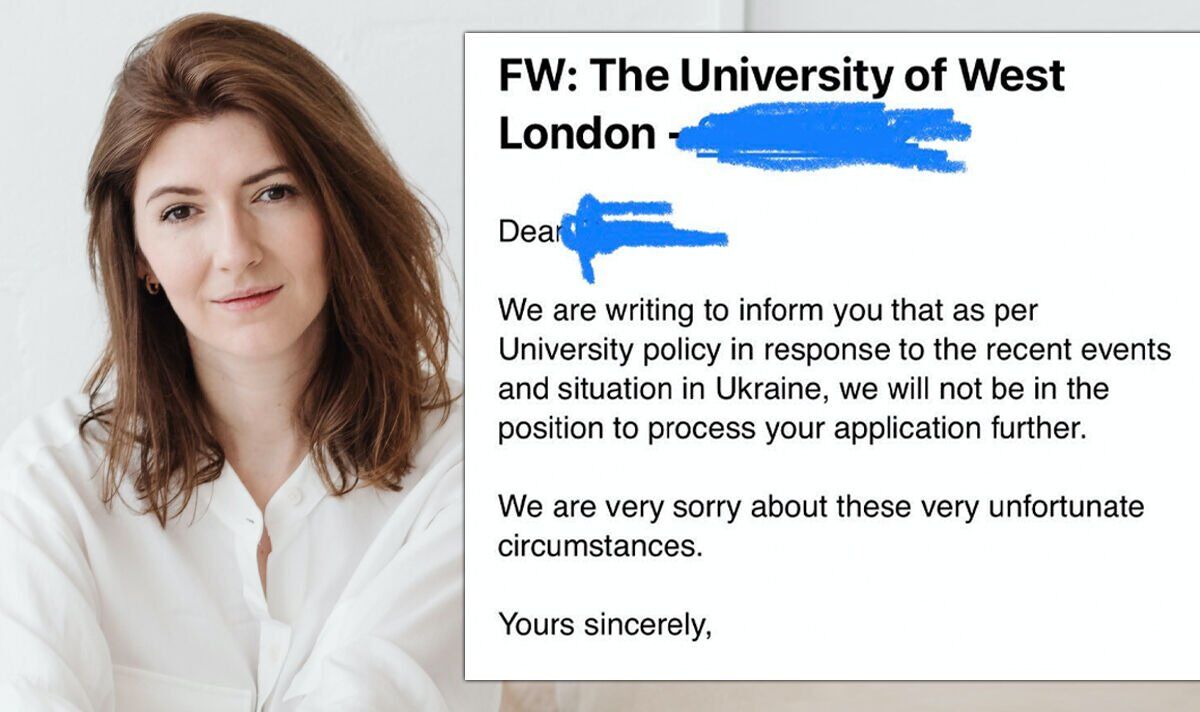 The “dangerous precedent” university was destroyed after the rejection of a Russian student. (Picture: NA)

The University of West London (UWL) stressed shortly after Putin’s invasion of Ukraine that its thoughts were with “those in Russia who bravely oppose the conflict”. He added that “in the face of such adversity, UWL affirms its commitment to the values ​​and freedoms that are at the heart of our way of life and our institution: community, tolerance, cooperation, freedom of research and expression. academics”. But an e-mail sent to an aspirant a few months later suggested that these values ​​had been set aside and replaced by individuals who shunned them because of their nationality.

Elena Ledneva has considerable experience in the hospitality industry, having worked for the Sochi 2014 Olympic and Paralympic Winter Games, among other international events, and had hoped to start a one-year masters course in hospitality management. luxury hotel shortly after moving to London with her. husband and newborn son in May 2021.

Although she was new to the country, she quickly became involved in her local parents’ community, even hosting weekly coffee mornings with other mothers.

Mrs Ledneva said Express.co.uk that the UWL course, about which she had spoken to administrators and visited an open day, would be well suited to her situation because “I have always enjoyed working with people”.

But the university’s international team said today, May 24, that his application to study at the institution would not be pursued due to “recent events and the situation in Ukraine”.

The UWL suggested that this was not a one-off decision, but a university-wide “policy” introduced since the launch of the Russian invasion.

He called the policy “unfortunate”, but the university’s own admissions policy suggests it was more important than that.

Among its “general principles” is that “the University will admit applicants who have the potential to succeed in their chosen course, regardless of their background”.

Express.co.uk contacted the UWL to ask how blocking a Russian student because of his nationality fit with its rules to prevent discrimination. He did not provide a comment.

Ms Ledneva said she was ‘shocked’ when she read the email, noting: ‘It seems completely unreasonable. I have no influence over the people who decided to start this horrible war and I am not responsible for their actions.

“I studied, worked for 33 years so that the actions of the President of Russia can now destroy my future goals and my career?”

The rejected candidate, who pointed out that the course, if taken, would have been funded by her husband, who is a UK PAYE employee ‘with a clear record of where the money came from’ and ‘proof that they are not linked in any way to the Russian government,” added: “Unfortunately there are still people in the UK who are discriminated against because of their nationality. it’s about Russians living in the UK, who don’t support the Russian government and are probably even more horrified by what’s going on than the rest of the civilized world.

“Believe me, it’s heartbreaking to see what your home country is doing in Ukraine and not being able to change anything.”

READ MORE: Hated Brexit deal ‘could break up the UK’

Georgios Giannakopoulos, a lecturer at City University London, who drew attention to the university’s response after seeing the email, said he couldn’t believe it was true at the time. departure.

He said Express.co.uk“I have heard anecdotal stories of Russian students struggling in London because they are victims of this popular hysteria without being the perpetrators of [the war].”

Mr Giannakopoulos referred to stories he had heard of people who only spoke Russian being “abused on the streets”, but noted that he now understood that this was the “emergent part tip of the iceberg”, given the involvement of institutions in anti-Russian discrimination.

The email, attached to this message, read: “We are writing to inform you that, in accordance with University policy in response to recent events and the situation in Ukraine, we will not be able to process your application further.

“We are truly sorry for these very unfortunate circumstances.”

UWL did not claim the email was fake after being approached for comment. Express.co.uk saw a copy of the email.

Commenting on the email, Mr Giannakopoulos added: “This is a dangerous precedent!”

It seems to be the one that was set up very shortly after Vladimir Putin announced the “special military operation” in Ukraine.

Many sports organizations, musical institutions and even civil communities in the West have directed their frustration with the ongoing war not only against the Russian state but against the Russian people, including those who are totally out of touch with decisions made in the Kremlin.

Last month, Wimbledon barred Russian and Belarus players from the tournament in light of the invasion.

As early as March 1, a Russian Orthodox church in Canada was desecrated by a man who jumped its fence, tried to open a door and, realizing it was locked, poured red paint over the door and builsinu steps.

Priest Dmitry Grygoryev, who along with a number of his followers was born and raised in Ukraine, said it was an act of hate that ignored the fact “we pray for peace and justice.” unity of the Ukrainian and Russian peoples”.

Around the same time, Bloomberg columnist Leonid Bershidskiy pointed out that a Berlin school “to which a lot of bilingual Russian children go…has been vandalized”.

A school in Cheshire has also been forced to close after receiving ‘aggressive’ letters in response to the ongoing war, according to CheshireLive.

The Cardiff Philharmonic Orchestra even dropped Tchaikovsky’s music, calling his music “inappropriate at this time”. He died 107 years before Putin was first sworn in as president.

The University of Milan also banned a course on 19th-century author Fyodor Dostoyevsky because he was Russian, but later backtracked.

For Mail on Sunday columnist Peter Hitchens, the ‘hysteria’ that was stoked following the invasion of Ukraine is reminiscent of the ‘madness which led to the kicking of dachshunds in the street in 1914 , because they were German”.

Mrs Ledneva said Express.co.uk it was completely absurd, and that “the key to bringing the world back to normal is within each of us. It is love and empathy towards the people around us, towards our children, our partners, our neighbours. Once we have peace within, it will also spread outside.

She added that it is “hate which, after all, is the root that causes such horrible events”.

Express.co.uk has contacted the Department for Education for comment.