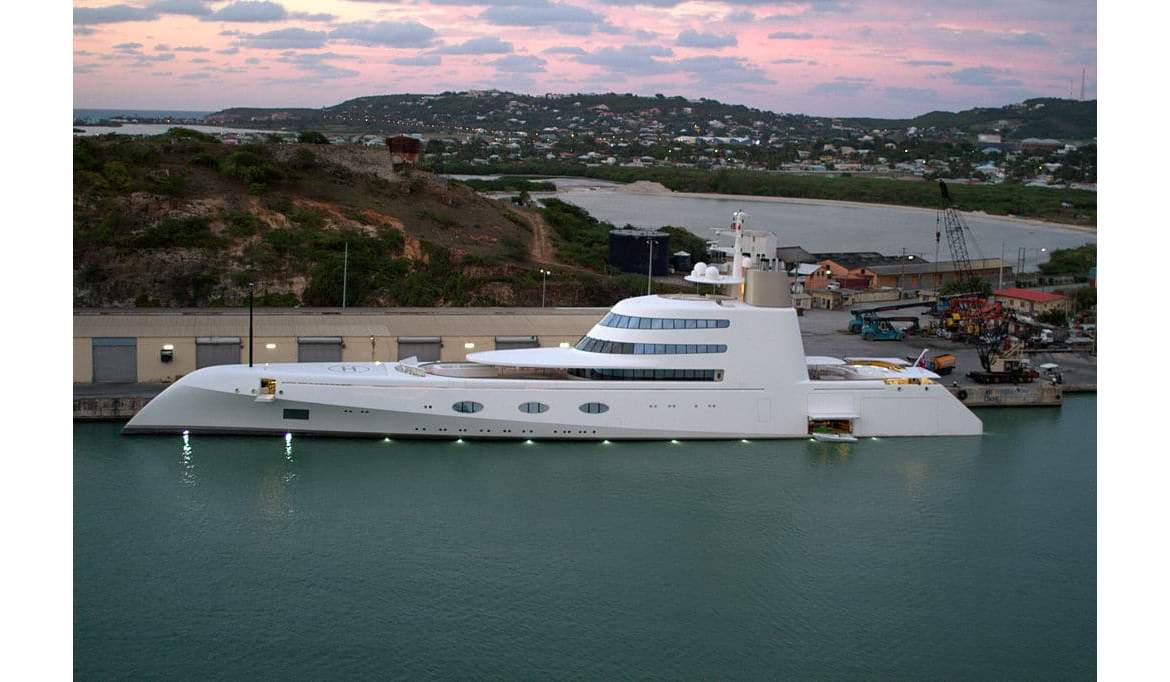 A superyacht is considered the most effective tool for the ultra-rich to show off their wealth and status. It is a well-known fact that superyachts often decide the pecking order among the wealthiest people on this planet. The majestic Motor Yacht A is a prime example. Owned by Russian tycoon Andrey Melnichenko, the yacht’s unique design instantly made her a superstar in the yachting world. Additionally, the 119m superyacht is believed to have been named ‘A’ to ensure it appears first in the shipping registers, while a newspaper report claimed it was done ‘so that nothing cannot precede it in the list of the largest ships in the world”. Ironically, the remarkable superyacht that loved being in the spotlight has been desperately trying to stay hidden since Russia invaded Ukraine. Melnichenko is among the Russian oligarchs to be sanctioned and his Motor Yacht A has been turned “black” to avoid being seized by the authorities.

According to publicly available marine data traffic data, Motor Yacht A was last detected in Indian Ocean waters near Malé, Maldives in the first week of March. However, the superyacht suddenly stopped broadcasting its location on March 10 and its whereabouts have remained a mystery ever since.

Incidentally, two days later Italian authorities seized another vessel belonging to Melnichenko named Sailing Yacht A, which happens to be the largest sailing yacht in the world and is worth $580 million. Motor Yacht A is not the only superyacht to go dark by disabling the vessel’s automatic tracking system. Alexei Mordashov’s $500 million superyacht Nord also took the desperate measure of turning off the transponder a few weeks ago to remain untraceable. In fact, there are quite a few pleasure craft owned by Russians who have done the same to avoid being impounded.

It is important to remember that it is against international regulations to switch off the vessel’s AIS transponder unless there is a threat of piracy. The Automatic Identification System (AIS) uses transponders that provide the vessel’s position, identification, course and speed to other vessels and coastal authorities. The system works in conjunction with marine radar to avoid collisions for water transport.

Data generated by AIS can also be publicly tracked by several online marine tracking services. Although the location of Motor Yacht A has not been updated for more than two months now, Motor Yacht A should still be in the Maldives, which has become one of the favorite havens of Russian oligarchs to hide their superyachts. At least six Russian-owned superyachts are believed to have taken refuge in the island nation.

Motor Yacht A
Motor Yacht A is considered by many to be the most famous superyacht in the world thanks to its unconventional blade-like design that makes it look like Captain Nemo’s Nautilus submarine. What makes its design even more fascinating is that it was written in just two hours by renowned superyacht designer Philippe Starck. Although the gigantic vessel is 119 meters in length and weighs nearly 6,000 tonnes, its sleek design helps slice through the water leaving almost no wake at 25 knots (around 29 mph).

Commissioned in 2004, Motor Yacht A was designed by naval architect Martin Francis and built by Blohm + Voss at its Kiel shipyard at a cost of $300 million. The magnificent vessel made waves in the superyacht industry when she was finally delivered in 2008. She was also the sixth largest private motor yacht in the world when she was completed.

While the ship’s stealthy upside-down hull design is probably the most significant highlight, the Motor Yacht A is packed with unconventional design features. One of these is the main outdoor lounging area located forward of the living room. Although protected by a deck overhang, it is open to the weather from the bow. The interior of the boat is also unconventional and is just as eye-catching as the bespoke exterior design. Unlike traditional superyachts which are overflowing with furnishings and fittings, Motor Yacht A’s interior is minimalist and features glossy white and polished silver finishes.

There are rooms that have floor-to-ceiling mirrors. If that sounds weird, the walls of one room are covered in white stingray skins, while another is covered in hand-stitched calfskin. There is a helipad above deck and a swimming pool forward of the superstructure as well as two further swimming pools aft. One is glass-bottomed and can be seen from the disco below deck. The superyacht can accommodate up to 14 people and requires a crew of 37.

The ship’s tender garage is described by Starck as his favorite spot on Motor Yacht A. It has two 11m tenders, the Open and Limo models, both also designed by Philippe Starck himself. The sleek superyacht is powered by MAN RK280 diesel engines capable of producing around 1200 cumulative hp, enough to give her a top speed of 23 knots. At its cruising speed of 19 knots (approximately 22 mph), the vessel can travel a maximum of 6,500 nautical miles.

Who is Andrei Igorevich Melnichenko?
Melnichenko is a 50-year-old Russian billionaire industrialist, founder and ex-beneficiary of fertilizer producer EuroChem Group and coal company SUEK. According to Forbes, his net worth is estimated at US$15.8 billion as of March 10, 2022, making him the 7th richest person in Russia. His first business venture was a chain of exchange offices he started in the 1990s. Although Melnichenko denied having any political affiliations, a meeting with Russian President Vladimir Putin after the invasion of Ukraine led him to placed on the sanctions list.