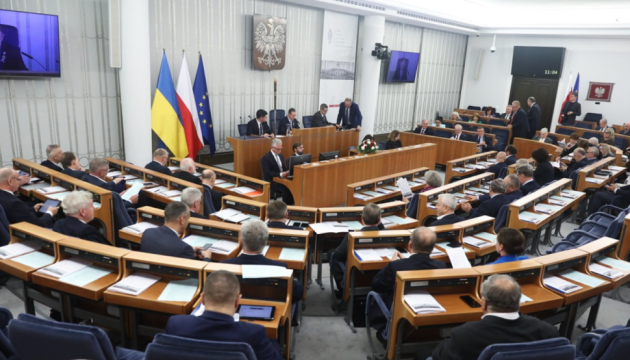 The Polish Senate passed a resolution on Wednesday recognizing the Russian authorities as a terrorist regime.

All Polish senators present voted for the resolution.

“Ukraine stands today for democracy and freedom. Russian invaders terrorize the inhabitants of Ukrainian cities by bombing civilian property: kindergartens, schools, theaters and housing estates. Bandits in Russian uniforms torture and kill prisoners of war and civilians in the occupied territories. kidnapped. In order to raise them under the regime of the Janissaries. Ukrainian citizens are being deported, relocated and sent to remote areas of Russia,” the resolution reads.

The document also adds: “We know all of these acts of state terrorism well from the pages of history. Europeans believed that they would never be threatened by genocide and war crimes. Meanwhile, Putin and his apparatus of violence have reverted to the brutal practices of the Stalinist and Nazi regimes. Therefore, it is necessary to defeat Russia and deprive it of any possibility of threatening its neighbors.

“The Senate of the Republic of Poland once again strongly condemns the Russian aggression and calls on all countries that advocate peace, democracy and human rights to recognize the government of the Russian Federation as a terrorist regime “, indicates the resolution.

Furthermore, “the Senate of the Republic of Poland expresses its gratitude to all institutions and organizations that have undertaken to investigate and document the crimes committed against Ukrainian society, and calls on the international community to provide full support to the International Criminal Court, which is investigating these crimes.”

In the resolution, the Senate thanked all Poles, the government and local administrations, non-governmental organizations and entrepreneurs for the help provided since February 24 to Ukrainians fleeing Russian bombs, mainly women and children.

The Parliamentary Assembly of the Council of Europe adopted a resolution on October 13 declaring Russia a terrorist regime.