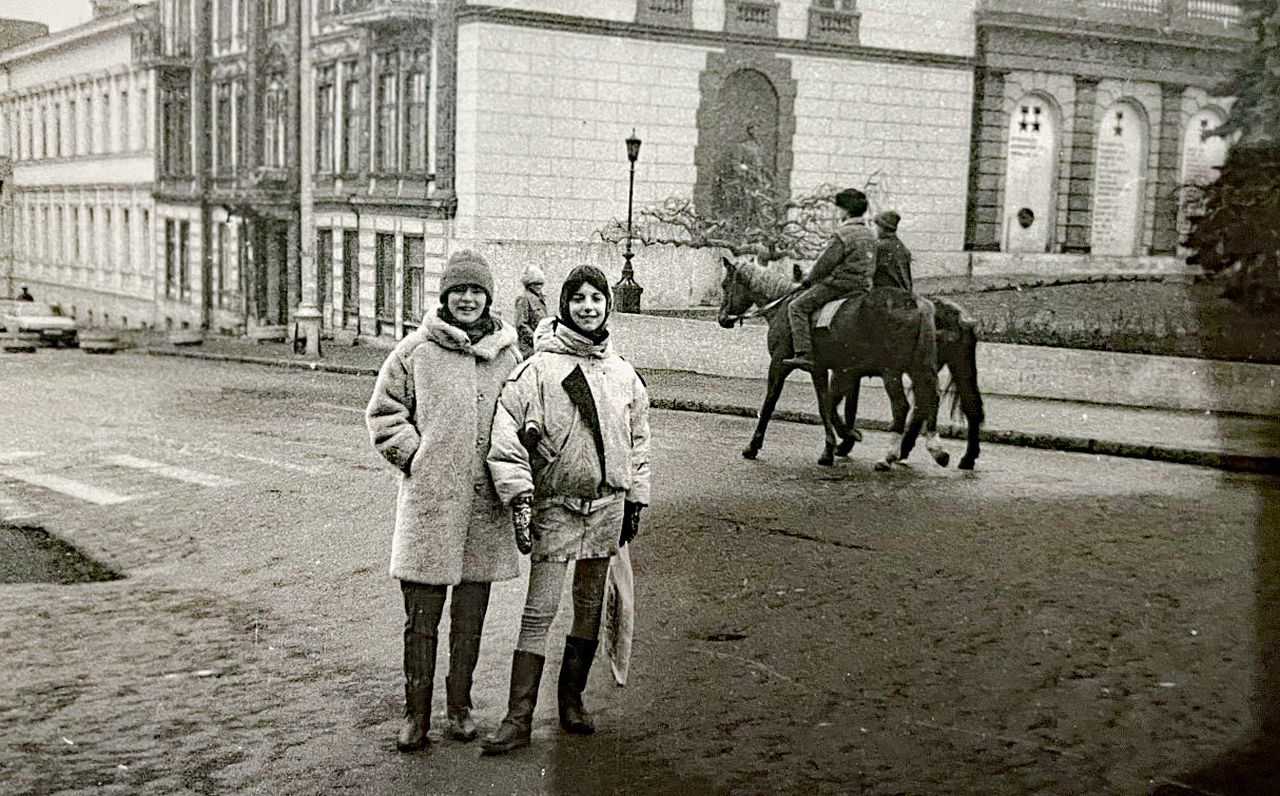 My mother. Sitting alone on the couch. Tears.

Staring at her phone, transfixed by a distant image, so preoccupied that she doesn’t register my presence. Tears falling softly onto the fabric beneath her.

I’m ashamed to admit that I’m not going to her house. I’m dazed at the sight – she looks so sad, so haunted, and I’m not strong.

It’s too hard to be the girl she deserves when I’m exhausted. By empty words, by hours of the night spent staring at the ceiling, by endless streams of horrible videos, all tinged with subtle variations of an accent that I know by heart. I walk to the office. Falling into my favorite chair and forcing myself not to turn on the television. I know what I’m going to see, anyway.

A few hours later, she shows me a photo. This is the once magnificent opera theater of Odessa. Covered in faded sandbags, the entrance is darkened. Spikes line the ground. They are a painfully inadequate barricade against the roaring bear. I look away.

It is an exact replica of a photograph taken 81 years earlier, in the midst of another battle against tyranny. A dark mirror of a time that my great-grandfather barely remembers, that he doesn’t talk about. He lost his father in this war.

I wonder how many more fathers will be taken before this one is over.

My mother knows opera well, she tells me. She went there every Sunday with her grandmother when she was a child. Bewitched by Sleeping Beauty by Tchaikovsky, Swan Lake, The Nutcracker, hypnotized by Don Quixote by Minkus, La Bayadère… Each new ballet left an imprint on her ever-growing mind. Years later, she performed there, her little violin and little frame filling every corner of the vast hall.

She often thought about it when leaving Odessa. Remembered hallowed halls as his fingers danced on the neck of his violin in rooms filled with red, white and blue. He therefore seemed irremovable. Permanent. Something she could come back to. More of a home than the notion of a nation that never fully accepted its family could ever be.

I’m glad my great-grandmother isn’t here to see the wreckage.

My mother is “from the Soviet Union”. Sometimes “born in Odessa”. Occasionally even “Russian”. But my mother will never tell you that she is “Ukrainian”.

It’s because she isn’t. She is Jewish. For many who live there, they are two fundamentally separate concepts. Each has its own nationality, listed separately on government documents. Down under, a seamstress tells me she’s adjusting the hem of my dress.

She’s from Cyprus, I guess. Experienced an invasion like this. Went to sleep crying while watching the news every night for a week.

She’s not Ukrainian either, but she feels the pain acutely.

She’s not the only one.

My mother didn’t speak a word of English today.

She’s too busy conversing with a distant cousin in quick, laconic bursts of a language I barely understand, no longer speak.

They are panicked. Both have not been able to reach any of their childhood friends for over five hours now. She is a journalist, one of the few in Moscow to speak out publicly against Putin. His channel, as well as the only other independent network in the country, has just been forcibly shut down. According to some rumors, she could face up to 15 years in prison.

I remember meeting her as a child. She was warm, friendly. Today, I fear for his life.

She only told the truth.

Yesterday I cried too. More than I have ever had.

I was sitting on the stairs. Not the most comfortable place, but a favorite of my pup, who loves to lie under my lap. It is also named after Freddie Mercury, my mother’s childhood obsession. A man whose music circulated, from one teenager to another, recorded on illicit cassettes in the former Soviet Union. It’s as if everything went back there.

My dad watching the news spouts a throwaway phrase. Something about how little separates my family from those who are torn apart. How easily that could have been us.

I imagined, for a moment, what it would be like to have to flee my home with my mother, my brother and my grandmother running beside me. Forget my friends, lose my neighbors, let all the photos and all the family memories burn. Abandon my father to fight.

And I couldn’t hold back my tears anymore.

My mother’s friend just called. She is fine, physically. Took a plane to Armenia, where the claws of the government cannot dig into the skin of his back. Her children and her husband remained in their home. They will try to find a flight tomorrow, to join her.

She is in shock, never imagined in her wildest nightmares that something like this could happen.

Now that it is, the future is uncertain.

She does not know if she will see Russia again.

It’s been almost two months. We’ve watched every new apocalypse unfold, we’ve mourned every loss, now too many to count. We felt numb, transfixed by the passage of time, by the return of our world to normal. People don’t talk about it so much anymore.

Don’t speak of havoc, destruction, death. Not even about the resistance that we saw rising, more powerful than we expected. It breaks my heart.

We still talk about it, my mother and I. My father too. She shows us images of her childhood, moments when little girls are perched in front of monuments, when great-grandparents attend operas and shows in a room as beautiful as any other, when families come together in small but still cozy apartments.

Soon, these monuments, these apartments, the opera, could be gone. Just like the others, only kilometers away, which are already dust.

I want to help, I want to do more than collect emergency supplies. I can only watch, discuss, write and hope.

And, at the end, the second I’m tired, or sad, or scared, I can go home with my mom and my dad and my brother and my puppy. I know that today, in a nation on the other side of the world, one that I have never seen but still feel connected to, one that is stronger than it should be , one that could fall at any time, many are not so lucky.

And my mother, sitting alone on the sofa, crying? She knows it too.

Marina Chernin is a high school student at Newark Academy. She believes in nurturing human connections and devotes a great deal of time to giving back to her community through her work with various non-profit organizations. Donations of medical supplies, sleeping pads, blankets, socks, shoes and knee pads can be dropped off at the Nova Poshta Warehouse, 27 Merry Lane, East Hanover, by April 30.

Our journalism needs your support. Please subscribe today to NJ.com.

Here is how to submit an editorial or letter to the editor. bookmark NJ.com/Opinion. Follow us on twitter @NJ_Opinion and on Facebook at Reviews on NJ.com. Get the latest news straight to your inbox. Subscribe to NJ.com newsletters.