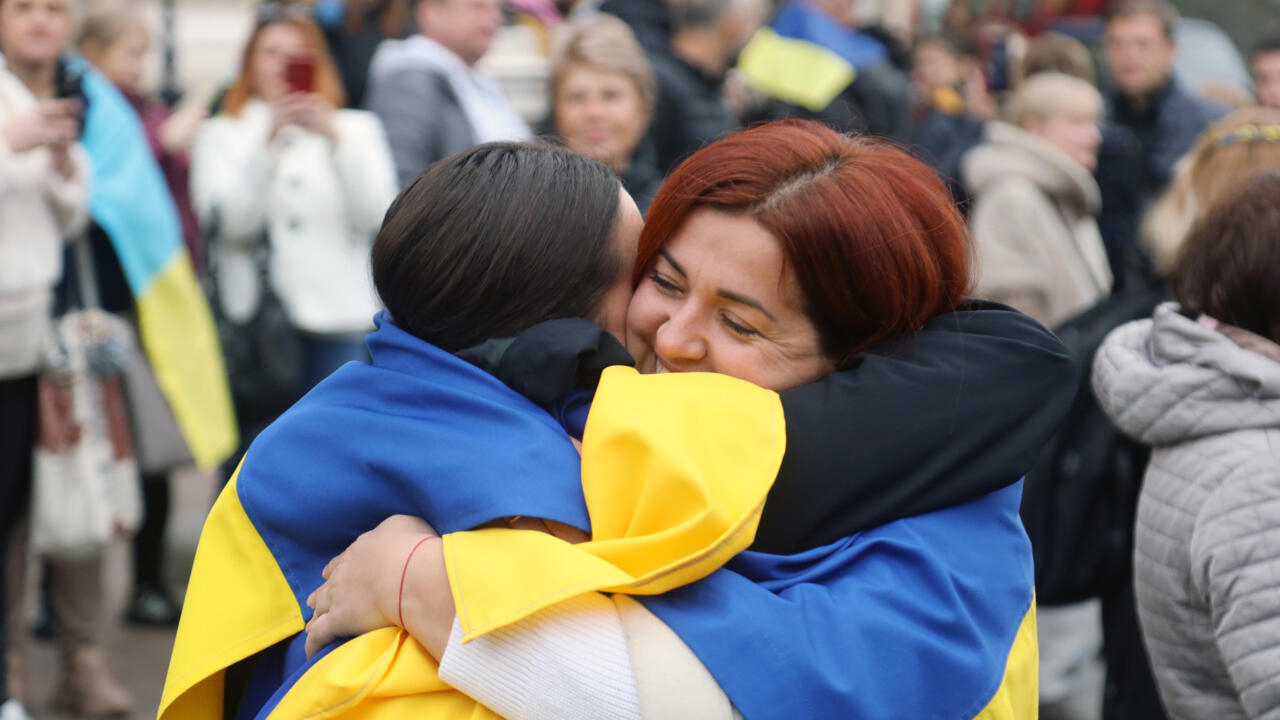 Kherson (Ukraine) (AFP) – Ukrainians in the liberated southern city of Kherson expressed a sense of relief on Sunday as they adjusted to life under Kyiv authorities after months of Russian occupation.

Residents said the Russians left a trail of destruction after an eight-month occupation, and an animal rights group said Moscow forces even stole a raccoon, wolves and squirrels from a local zoo.

There were no jubilant scenes on Sunday, an AFP correspondent said, but many residents said they felt great relief after Kyiv regained control of the city.

Residents lined up for food, and many adults and children walked around wrapped in Ukrainian flags.

Some gathered in the town’s main square, mostly to use Starlink satellite internet and connect with relatives.

“They took everything with them. They emptied the stores,” said Viktoria Dybovska, a 30-year-old saleswoman.

“They turned off the lights three or four days ago when they were leaving. They just disappeared overnight,” added Antonina Vysochenko, 29.

“They took most of the zoo’s collection to Crimea: from llamas and wolves to donkeys and squirrels,” he said on Facebook.

In a major humiliation for the Kremlin, the Russian army withdrew from the city of Kherson on Friday.

Kherson was one of four regions in Ukraine that Russian President Vladimir Putin claimed to have annexed in September.

In the formerly occupied village of Pravdyne outside Kherson on Saturday, returning residents hugged their neighbors, some unable to hold back their tears.

“Victory, finally!” said Svitlana Galak, who lost her eldest daughter during the war.

“Thank God we have been released and everything will now fall into place,” the 43-year-old told AFP.

Several mines and deactivated anti-tank grenades could be seen in the settlement, which houses a Polish Roman Catholic church, with a number of damaged buildings also visible.

During the clearance, a curfew was put in place and movement in and out of town was restricted, local authorities said.

The city of Kherson – which serves as the gateway to the Black Sea – was the first major urban center to fall after the Russian invasion in February.

Zelensky said Ukrainian forces had established control over more than 60 settlements in the Kherson region.

Ukraine’s police chief Igor Klymenko said on Saturday that around 200 officers were erecting roadblocks and recording “the crimes of the Russian occupiers”.

He urged residents of Kherson to watch out for possible landmines laid by Russian troops, saying a policeman was injured while clearing an administrative building.

A woman and two children were taken to hospital after an explosive device detonated near their car in the village of Mylove, police said.

Across the Dnipro River to the east, local pro-Moscow authorities in the Kakhovka district issued an evacuation order for its employees to head to Russia’s Krasnodar region.

Ukraine’s armed forces said on Saturday evening that Russian forces were “strengthening the fortification” of defensive lines on the left bank of the Dnipro.

The complete reconquest of Kherson opens a gateway for Ukraine to the entire Kherson region, with access to both the Black Sea in the west and the Sea of ​​Azov in the east.

On Saturday, an increasingly isolated Putin spoke by phone with Iranian President Ebrahim Raisi, pledging to step up political and trade cooperation, the Kremlin said.

Shunned by the West for his offensive in Ukraine, the 70-year-old leader will not travel to Indonesia for the G20 leaders’ summit next week.

US Secretary of State Antony Blinken hailed the “remarkable courage” of Ukraine’s military and people and pledged US support “will continue as long as it takes” to defeat Russia.

“Ordinary people in Russia must surely ask themselves: ‘Why was all this done?'”

The Kremlin insists that Kherson remains part of Russia.