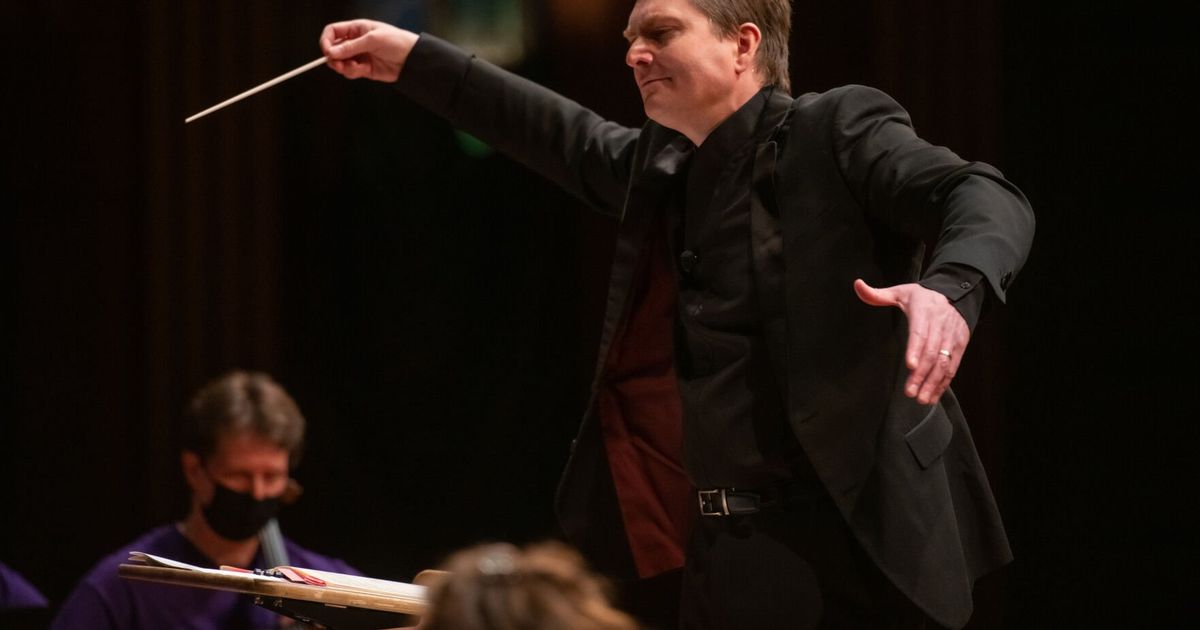 Vladimir Putin’s horrific assault on Ukraine inflicted unforgivable losses on that country and, quite understandably, caused the rest of the world to turn away from all things Russian, including the precious musical heritage. who has brightened and enriched so many lives.

Partly to defend against this, James Lowe, Music Director of the Spokane Symphony Orchestra, opted to continue with plans Saturday night and Sunday afternoon to wrap up the current season of Masterworks concerts with an evening of 19th-century Russian music. century, although the title of the program was changed from “Russian Nights” to “1001 nights”.

As Lowe pointed out from the Martin Woldson Theater stage at Fox on Saturday night, British audiences in 1940 listened to the music of Beethoven and Brahms as German bombs rained down on London. As a reminder of the importance of Russian music, Lowe chose three works that define “classical music” for many people.

The three pieces introduced millions of people to a life of joy listening to and performing this music in homes and concert halls: the “Polovtsian dances” (1890) from Alexander Borodin’s “Prince Igor”, the concerto for Piano No. 1 in B flat by Pyotr Tchaikovsky. -flat minor op. 23 (1888) and the orchestral suite “Scheherazade” (1888) by Nikolai Rimsky-Korsakov.

Israeli pianist Inon Barnatan, who was introduced to Spokane audiences in 2016 during performances of another staple of the Russian repertoire, Sergei Rachmaninoff’s Piano Concerto No. 2, was featured as a soloist in the concerto. Borodin’s “Polovtsian Dances” were ubiquitous in programs of the first half of the 20th century and provided the melodic content for the Broadway show “Kismet” in 1953.

As if to allay fears that he might be inclined to rest on the laurels of music, Lowe shook the audience by opening the piece at a blistering pace, providing the first opportunity to appreciate the tremendous virtuosity and panache whose the orchestra performed throughout the evening.

The orchestra was joined in the Borodin by the Spokane Symphony Chorale, whose director, Kristina Ploeger-Hekmatpanah, was aware that it was not a piece of abstract music, but excerpts from a dramatic theatrical work.

Therefore, the chorale, as it always does, contributed not only to the beauty of tone and crystal-clear articulation of the Russian text, but also to the dramatic specificity of the interpretation, allowing the audience to imagine the spectacle exotic of medieval (Ukrainian) warriors held captive. by marauding hordes.

Any pianist taking up the gauntlet of the Tchaikovsky’s Concerto must be able to not only negotiate its notorious technical challenges, but also overcome the barrier that its familiarity poses to establishing genuine engagement with an audience. Barnatan accomplished this to a degree that will leave a permanent imprint on all who heard his performance.

Not since Daniil Trifonov electrified Spokane audiences in 2012 has a soloist made such an impression as Barnatan. He didn’t do it through technique alone, although I can imagine Vladimir Horowitz asking him for advice on playing octaves. He also did this by approaching the piece as a collaborative exploration of an inspired score rather than a competition for dominance with the orchestra.

An audience member remarked how unusual it was to see a soloist in this concerto constantly turn his gaze to the orchestra, locking eyes with a performer or section to make sure they were in perfect sync. This is the behavior of a chamber musician, not a concerto soloist, but Barnatan sees Tchaikovsky’s Concerto not as a steeplechase, but as an intellectually and emotionally coherent whole.

And like a carefully planned journey through the soul of an exceptionally skilled and sensitive observer of the human condition. He and Lowe guided this journey, and the elation that left the audience on their feet, not once but twice, showed that everyone had arrived at their destination together.

Before beginning the second half of the program with “Scheherazade”, Lowe turned to the audience to explain the presence in the orchestra of an empty chair adorned with a vase of flowers. This chair was occupied for 32 years by the orchestra’s principal flute, Bruce Bodden, who died of cancer a month before the concert.

Lowe dedicated this performance to Bodden, one of the most beloved and admired members of Spokane’s arts community, whom he described as “funny, cheeky and outrageously musical”. What followed was a depiction of Rimsky-Korsakov’s thrice-familiar masterpiece as fresh and alive with a sense of discovery as if ink were still wet on the page.

There were all the colors and thrilling effects one hopes for in a performance of “Scheherazade,” but also elements of tenderness and delicacy that one rarely encounters there. It seemed that Lowe had expanded the emotional “dynamic range” of music to embrace a wider range of human feelings.

This wider range is also found in the many solo instrumental passages that Rimsky liberally sprinkled throughout the work. The contributions of principal oboe Keith Thomas, principal cello John Marshall and principal bassoon Lynn Feller-Marshall were particularly notable.

The contribution of concertmaster Mateusz Wolski, whose take on the role of narrator, Scheherazade herself, embraced all the sultry sweetness one had come to expect, but also the strength in keeping with a woman cunning and determined enough to fend off a death sentence for 1,001 nights.

Lowe concluded this celebration of Russian musical heritage with a piece that was not on the program: “Prayer for Ukraine” (2014), an ineffably touching work performed by a small string orchestra by Ukrainian composer Valentin Silvestrov. Any feeling of unease one might have had was resolved by this sensitive gesture.

Under Lowe, the orchestra always seems to carry something in reserve. Everything needed to get the most out of a musical passage – be it an increase in speed, clarity, volume – is still there. It was therefore with great success that the public reacted to the announcement of the extension of Lowe’s contract with the Spokane Symphony until 2025, allowing him to continue to share his singular qualities with the orchestra and the city of Spokane.