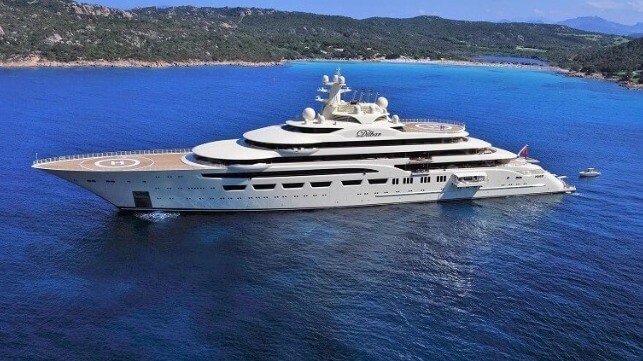 The Russian megayacht Dilbar was detained in Hamburg in March as part of sanctions against Russia’s business elite, and she has now been towed to a berth in Bremen as German authorities investigate her alleged owner’s finances.

Towing frees up valuable drydock space at the Lürssen yacht yard in Hamburg, according to Bild. Dilbar, who is believed to be related to the family of sanctioned Russian oligarch Alisher Usmanov, was transferred on Tuesday evening to the Lürssen headquarters on the Weser River in Bremen. German customs and local police accompanied the very valuable tow as a precaution. According to NDR journalist Benedikt Strunz, she was towed “dead ship” with no crew on board to ensure she could not attempt to escape.

Dilbar is the largest personal yacht in the world by volume, measuring nearly 16,000 GT. She can accommodate up to 24 people in her spacious 40,000 square foot interior. According to her builder, she also has a swimming pool 25 meters long and 180 cubic meters, the largest ever installed on a yacht.

Dilbar was initially detained in Hamburg on a temporary basis, but in April the German Federal Police (BKA) announced that “thorough investigations despite concealment at sea” revealed that Usmanov’s sister was the beneficial owner of the ship. The yacht is therefore subject to sanctions and long-term detention.

The yacht could find itself linked to a wider investigation into Usmanov and his family’s assets. On Wednesday, the day after the towing, German police raided several properties allegedly linked to Usmanov in southern Bavaria. German authorities suspect Usmanov resides in a villa on Lake Tegernsee but has failed to pay income taxes owed by a German resident, according to OCCRP. He is also suspected of having laundered money in his properties and in his megayacht.

Alisher Usmanov owns Russian metals conglomerate Metalloinvest, media company Kommersant and mobile provider Megafon. Through Metalloinvest, he is also a major shareholder in Deep Sea Minerals Finance, the successor company to bankrupt deep-sea mining company Nautilus Minerals. His net worth has been estimated at around $15-19 billion, which puts him in the ranks of the 100 richest people in the world.

Usmanov left Europe for Uzbekistan on February 28, the day he was sanctioned, according to OCCRP.