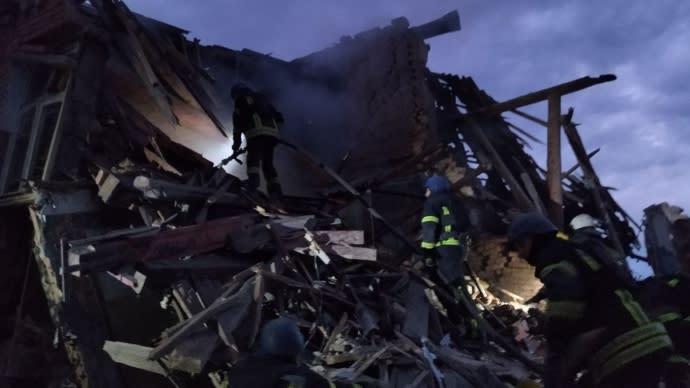 3 people were killed as a result of the shelling of Chuhuiv in Kharkiv Oblast, and Russian troops partially destroyed a two-storey residential building.

Quotation: “At night, the Russian occupiers launched rocket attacks on Chuhuiv. Unfortunately, there were fatalities: 3 people were killed – 2 men aged 60 and 68 and a woman aged 70. Doctors have hospitalized 3 other people in medical facilities.”

Details: Rescuers report that Chuhuiv was hit by a rocket at 03:20 on July 16.

The shelling partially destroyed a two-storey residential building. The construction materials of the building with an area of ​​40 square meters caught fire.

Syniehubov reported that a residential building was destroyed in the Kharkiv region, and a school and a building materials store were damaged.

All specialized services are working on the sites of the blows and the rescuers continue to clear the rubble.

During the day, the occupiers also shelled the Kharkiv district, including the Derhachi hromada [amalgamated territorial community] and the Izium district.