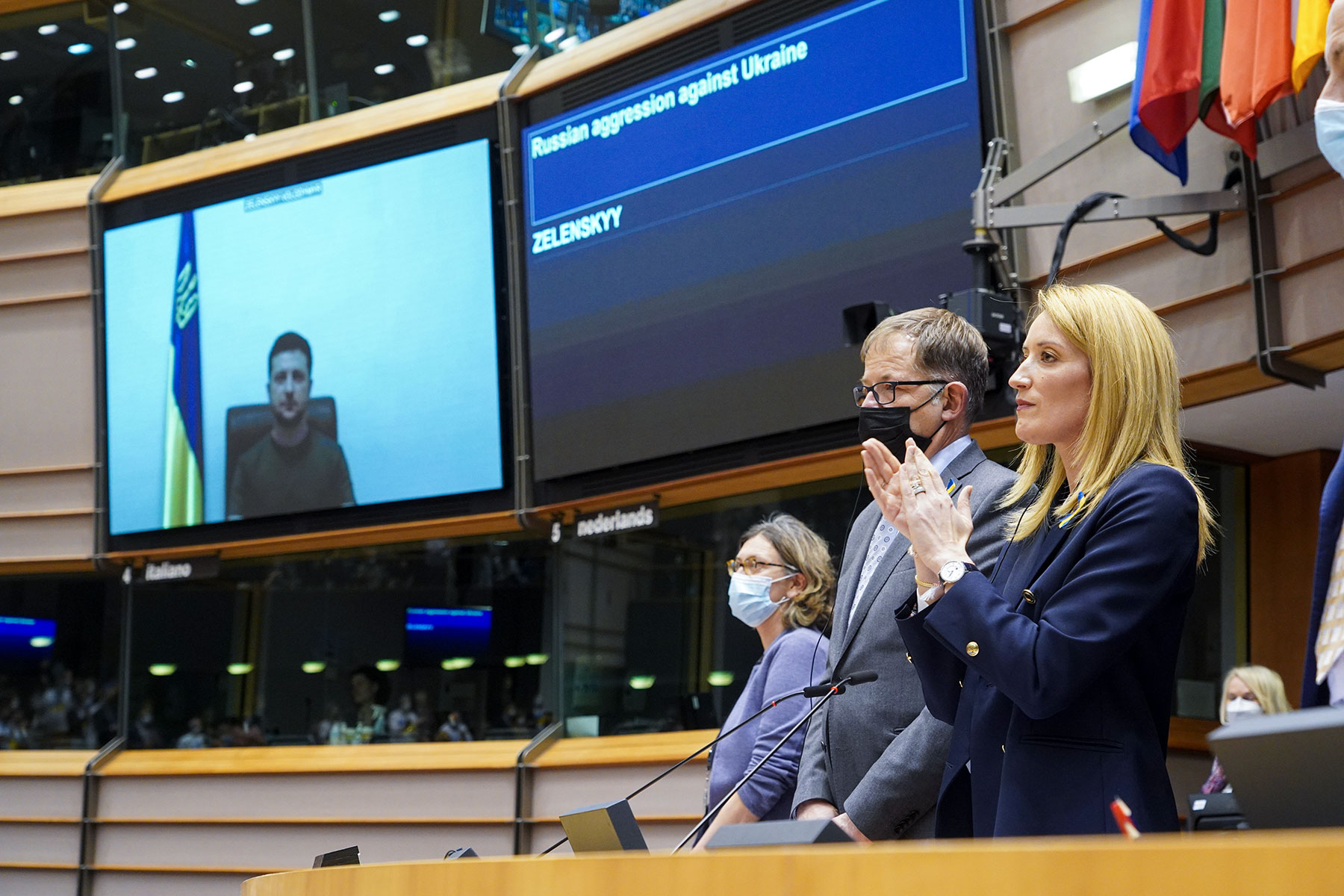 Opening the discussion, Speaker of Parliament Roberta Metsola said: “We are here today in the dark shadow cast by Putin’s war. A war that we did not cause. A war we didn’t start. A scandalous invasion of a sovereign and independent state. On behalf of the European Parliament, I condemn in the strongest terms the Russian military aggression against Ukraine and I express my solidarity with all those who suffer and all those who are killed.”

“We will stand up. We will not look the other way when those fighting in the streets for our values ​​confront Putin’s massive war machine. We will support the International Criminal Court’s jurisdiction and investigations into war crimes in Ukraine. We will hold him accountable,” she added.

Ukrainian President Volodymyr Zelensky said, “in a pause between missile strikes”, that Parliament and EU leaders must now “prove that the EU is with Ukraine”. “I speak today on behalf of Ukrainian citizens who are defending it by paying the ultimate price,” he continued.

Mr Zelenskyy referred to the attack on Kharkiv, “the city with the biggest square in the country, called ‘Freedom Square’”. “This morning, two missiles hit this Place de la Liberté, killing dozens. This is the price we pay for our freedom. From now on, every square in every Ukrainian city will be called Freedom Square”.

“We are fighting for our rights, our freedoms, our lives and now – for our survival. We are also fighting to be equal members of Europe. So now prove that you are with us, ”he told the deputies. “Prove that you are indeed Europeans and that then life will prevail over death, and light will prevail over darkness. Glory to Ukraine”. Chairman of the Verkhovna Rada Ruslan Stefanchuk told MPs: “Ukraine defends the border of the civilized world, and if Ukraine falls, no one knows where the Russians will stop.” He insisted that the best way to support Ukraine “is a real recognition of our European aspirations”.

“This brutal and massive invasion of Ukraine is unjustified, unprovoked and based on despicable lies, and it is happening for one reason only: because in Maidan Square you have chosen freedom, democracy and the rule of law,” said the President of the European Council. Charles Michel, calling Russian President Vladimir Putin‘s invasion “geopolitical terrorism”. He assured MEPs that the Council will analyze Ukraine’s “serious, symbolic, political and, in my view, legitimate request” to join the EU.

President of the European Commission Ursula von der Leyen said: “This is a moment of truth for Europe. It is a clash between the rule of law and the rule of guns, between a rules-based order and outright aggression. We cannot take our security for granted, we must invest in it.” She pointed out that “if Putin sought to divide the EU, NATO and the international community, he achieved exactly the opposite”.

“To make peace, we must be two; but for war, it only takes one, as Mr. Putin has shown. This is why we must significantly increase our deterrent capability, in order to avoid war,” said the EU foreign policy chief. Joseph Borell. “Defending the rule of law and strengthening trade relations will not be enough to transform the world into a peaceful place,” he added.

A new era has begun

Many MEPs have pointed out that the Russian invasion of Ukraine marks the beginning of a new era for Europe and the world. They condemned the brutal aggression of Russian President Vladimir Putin and the Kremlin and expressed their admiration for the way the Ukrainian army and people are resisting the assault, fighting for their country, freedom, democracy and common European values.

They also welcomed Europe’s strong response to the unlawful attack, such as the sanctions packages adopted, while stressing the need to remain united to continue to face the serious challenges ahead.

Some MEPs advocated recognizing Ukraine’s European aspirations and fight for freedom by stepping up EU work to grant the country EU candidate status. Others stressed the importance of jointly addressing the impact that sanctions against Russia will have on a European economy still recovering from a global pandemic, ensuring support for the countries most affected as well as businesses and citizens. Finally, some underlined the need to welcome Ukrainians fleeing the war and all EU countries sharing this responsibility.