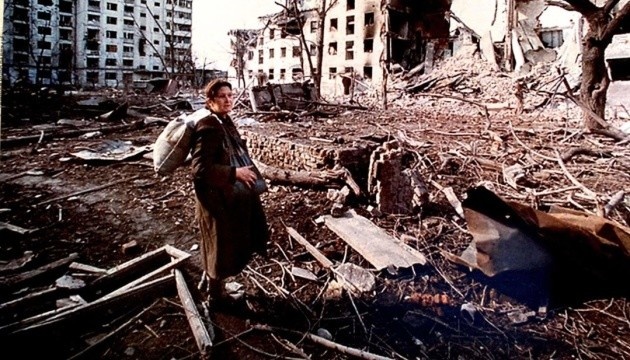 – POPOVA: I think you know better than even the Ukrainians the methods of war in Russia. Talk it over.

-MASKHADOV: Yes, there is a bitter experience, the last two wars. Although we have been fighting for about 400 years, we are resisting Russia. In those two wars we lost about 300,000 civilians. These are 40-45 thousand children of them. The methods are the most terrible, worse than those which were shown to us once by the canals, in films about the Nazis. I will call these Russian occupiers, Russian soldiers, military with the same word – they are fascists. Their methods, how they killed us, how they kill people in Ukraine today – everything is the same, the same methods.

– POPOVA: That is to say, it is about bombings, mass murder, chemical weapons, deception, disinformation, calling the opposite side Nazi, is not it not?

-MASKHADOV: By the way, I will say my father’s words. He said that the first Russian-Chechen war was mainly based on the army. The second Russian-Chechen war, started by Putin, was carried out mainly by the special services. That is to say, it is a shameless lie, disinformation, propaganda, information blocking. They did not allow journalists from various organizations to enter the territory of our republic. If we talk about horrors, I will talk for a long time.

-MASKHADOV: I better show you. (Maskhadov shows photos from Chechnya, which he brought to the show).

By the way, I have documents that I brought here. Here, for example, children – five, one family, one air bomb. It is in the mountains of our republic. I was talking about fascists, here they are fascists.

-MASKHADOV: Yes, on the territory of Ichkeria during the war. How they torture, for example people. Here is a civilian, this is a body. Here is the “star” of the Soviet Union, here is the fascist swastika. That is to say burned, cut. I’ll show you one more thing. This is Vanya from Russia, a Russian occupier.

– POPOVA: Did they also steal your geese?

-MASKHADOV: Yes, geese were stolen. They stole everything – spoons, ladles, refrigerators, as they steal here. They shot down their armored vehicles, trucks and brought out gifts for the families. This Vanya got hungry and took two geese. Here is a terrible picture – they cut off their heads and boiled them in a bucket. They speak of the courage of the Russian troops. We saw this “courage” – it is a human shield, civilians.

– POPOVA: We also had similar shots.

-MASKHADOV: That is to say the Russian military personnel, the occupier cannot do without them. Here is also a bomb – the children are lying here. It is in the war mountains of our republic of Putin. Here is a peaceful gathering. They planted a charge, detonated it, and here are the dead civilians. And they do all this after failing in battles, when they cannot capture a settlement or some of our positions and go and break away from the civilians. Like revenge for that.

– POPOVA: You also brought documents. Perhaps you want to talk about what is in these documents and photos?

– MASKHADOV: This is the full report. For example, I took a few. This is a report from the Prosecutor General’s Office of the Chechen Republic of Ichkeria to our President. These are the originals of the crimes these invaders committed against civilians. Here’s an example, here’s the first suggestion I found. “On Chukotskaya Street in Grozny, Russian servicemen broke into the house and took Magomedov Magomed from his apartment. Since then, his whereabouts and whereabouts are unknown. It is December 1, 2002. Kidnapped, killed, robbed. Today, seeing this photo in Ukraine, I call on Ukraine and the other states that are helping Ukraine today to resist the Russian invaders to recognize this genocide – the genocide of the Chechen people, which was committed in the era by Yeltsin, which is committed by Putin, as well as the forced expulsion of the Chechen people in 1944 under Stalin.

– POPOVA: Then they were allowed to come back. The Crimean Tatars were also expelled from us. They were then allowed to return.

– MASKHADOV: My father and my mother were born in Kazakhstan during this deportation. All our relatives have been deported, everyone. During this forced deportation, they killed people, drowned in lakes, burned, shot sick people who could not move. We have lost nearly half of our people. Then 13 years later, they came back. But in no case was this action recognized by a word such as genocide. It was genocide. We were expelled because we were Chechens and accused of helping fascists, even Hitler at the time. Even though we weren’t busy.

– POPOVA: How do you assess the conduct of military operations in Ukraine?

– MASKHADOV: Good question. When the army of these Russian terrorists invaded, the war was already beginning. It was said that there were so many Russian troops that they could take kyiv. I was sure that they would not pass, no one would take kyiv. They can occupy a part. But they will not be able to occupy a large part of it. Why am I saying this? I have known the Ukrainians for a long time, we had good relations. My father had Ukrainian colleagues and we are friends to this day. By the way, I went to see them here. I know your spirit, how much you love your homeland, your land, your people. In war, first of all, it is not the weapon that wins, but the spirit of this people. When you fight for your land, you can fight very well, resist such invaders. Yes, in our Russian-Chechen war, they invaded our city. We threw them into the city, because we didn’t have the strength to hold the fronts there. We launched their city and defeated those troops. In one night about 300 tanks burned in our city and thousands of Russian invaders were killed. In other words, we landed the most powerful blows we could. We fought without any outside support, not with weapons, nothing.

– POPOVA: You have already said that the Russians should not be trusted. But is there anything else you can recommend to Ukrainians?

– MASKHADOV: Now, in this situation, of course, I only think about how quickly this whole end, peace comes. But as we can see, Russia doesn’t want that, bombing cities to this day. I believe that all of us, Ukrainians, Chechens and other peoples of the Baltic, for example, the Caucasus, must somehow together resist this monster. Because the events that unfolded here – this war concern us all. That’s why I’m here in Ukraine. I came here because we only have one enemy. Because I have very good relations with Ukrainians. I want to be here next to you. I will only appeal to others to help Ukraine today.

– MASKHADOV: Now, in this situation, of course, I only think about how quickly this whole end, peace comes. But as we can see, Russia doesn’t want that, bombing cities to this day. I believe that all of us, Ukrainians, Chechens and other peoples of the Baltic, for example, the Caucasus, must somehow together resist this monster. Because the events that unfolded here – this war concern us all. That’s why I’m here in Ukraine. I came here because we only have one enemy. Because I have very good relations with Ukrainians. I want to be here next to you. I will only appeal to others to help Ukraine today.