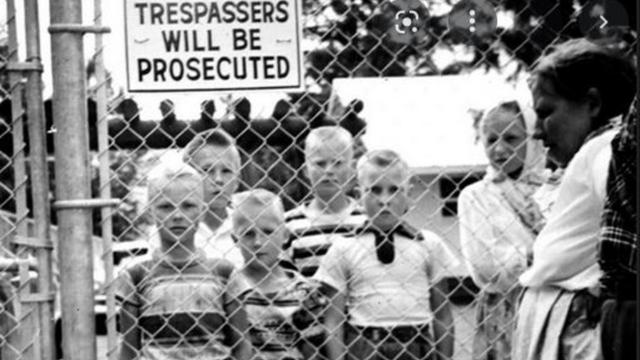 Residential schools for Doukhobor sons and daughters were a brutal attempt to eradicate their culture and identity. Canada has yet to issue an apology.

Doukhobors were already considered a problem before the 1950s. But in 1952, the Social Credit Party came to power under WAC Bennett, who adopted a “tough on the douks” policy. Between 1953 and 1955, the Royal Canadian Mounted Police was sent in an operation dubbed “Operation Snatch” to conduct a series of raids on the Sons of Freedom homes in or near Krestova. They apprehended about 200 children, supposedly of school age (7-14 years old). However, as Freedomite parents refused to register the births, many children as young as 4 and 5 years old were seized. These children were forcibly captured, put on buses and driven 99 km north to a former tuberculosis sanatorium in the village of New Denver.

Ashleigh B. Androsoff Arnosoff describes school conditions vividly in her 1999 master’s thesis: “These children left a warm, Russian-speaking, family-centered community environment to arrive in a cold, disorganized and unhealthy English environment. crew.–speaking establishment. Matrons and teachers were overworked and inflicted punishments. Parents were only allowed to visit every other Sunday: a privilege withdrawn if a child was deemed to misbehave. Parents often drove over a hundred miles to see their children to no avail, as their visit was canceled without informing them, due to the child’s “misbehaviour”. Sunday parent and child gatherings were separated by a tall chain-link fence. Parents embraced their children through metal ties, passing picnic baskets and blankets… over the fence.

When our McGill team interviewed the Doukhobors in 2019, we heard many stories about RCMP raids in the 1950s. One lady told how, as a little girl, she was bundled up every morning and sent to hide in the forested mountain all winter to avoid police raids, only returning home after seeing smoke coming out of the chimney, then she could run home for hot soup and bread with her parents. One evening, as she was running down the mountain towards her home, she suddenly saw police cars parked in the driveway. She turned to flee and found a huge bear in her path, standing on her haunches, looking her straight in the eye. She glanced at the police cars, then looked into the bear’s eyes. “I could see he meant me no harm.” So she slowly walked around him to hide in the woods. The bear turned his head curiously. Other Doukhobors described childhood experiences where they hid in secret compartments, under beds, under the house, in the outhouse when the RCMP came looking for them. One described how she hid in a secret closet built by her father, and when a constable banged on it, she suddenly peed her pants. The Mounty saw urine dripping on the floor but, being a nice man, he shouted to his comrades, “Nobody here!” and the RCMP left.

A man in his 60s told of a certain New Denver dormitory matron who used to corner little Doukhobor boys in closets and sexually assault them until they cried or screamed. He choked up describing how she had threatened him not to say anything. There were stories of attempts to kiss their parents through the icy wire fence and how the matrons cut off the girls’ beautiful golden braids. There were more pleasant stories of how they played with the children of the 22,000 Japanese Canadians whose parents had been forcibly uprooted, dispossessed and incarcerated in New Denver during World War II.

Perhaps the worst story involved a certain teacher who made no effort to teach the subjects, but simply read the Hardy Boys books and asked her students to bring her candy. She would laugh and give them points. Thus, the children learned English and sports, but were behind in their schooling when they “graduated” from the school in New Denver. Most of them found work as farmers, loggers, truck drivers, waitresses, gas station attendants, as they would have done if Operation Snatch had never happened. Only a few educated themselves and went to college.

The notorious New Denver residency lasted from 1953 to 1959, until the last of the Freedomite parents finally signed a contract with the government promising to send their children to public school. So the Sons of Liberty were finally broken, tamed, assimilated – or were they?

In 2001, the last reported Sons of Freedom arsonist, an 81-year-old woman named Mary Braun, was sentenced to 6 years in prison for burning down a community college building, causing $350,000 in damage. She immediately stripped naked in court. This was his fifteenth arson conviction.

How are these Freedomite kids doing today? About 100 of them (now in their 60s) banded together as The New Denver Survivors Collective (NDSC). They have been pushing for an apology from the BC government since 2000.

In 1999, a BC Ombudsman’s report was released stating that the Sons of Freedom children had been “unjustly removed from their families” and “unjustly confined to a prison-like school”.

This prompted the NDSC to file a lawsuit against the BC government, alleging negligence, forcible confinement and forced eviction from their homes.

They also demanded an apology.

But their apologies were not offered. Instead, BC Attorney General Geoff Plant issued a “statement of regret.”

In February 2012, about 100 members of the New Denver Survivors Collective appeared before the British Columbia Human Rights Tribunal to argue that the government had wrongfully refused to apologize. They said they were the child victims of a long-running cultural battle between their community and the province. They compared themselves to thousands of residential school survivors who, in their childhood, also suffered psychological, physical and sexual abuse, and were punished for speaking their own language.

It was a valid comparison, as forcibly separating children from their parents is a familiar strategy of governments seeking to undermine and assimilate their minority cultures. We have seen the policies of Australian governments in the 1900s regarding ‘stolen generation’ Aboriginal children; also, during the 160 years of residential schools for First Nations and Métis children in Canada; and more recently, in “Happy Heart” in China boarding schools for Uyghur children. All these children, whether aboriginal, indigenous or Uyghur, share a common experience. They were forcibly taken from their homes and confined to overcrowded “residential” schools, with little or no contact with their parents. Their hair was shorn for an institutional uniform bald or “pudding bowl” look. Prohibited from speaking their native language or seeking solace in indigenous spiritual practices, they were harshly disciplined and indoctrinated into the nationalist values ​​and worldviews of the ruling majority.

But there is an impressive history of government apologies.

The Canadian government, after launching the Truth and Reconciliation Inquiry in 2014, formally admitted its wrongdoing regarding the past treatment of Indigenous peoples. On June 25, 2021, Prime Minister Justin Trudeau apologized for “incredibly harmful” government policies after the discovery of nearly 1,000 unmarked mass graves of Indigenous children at residential school sites in British Columbia and Saskatchewan.

On February 13, 2008, Australian Prime Minister Kevin Rudd unexpectedly apologized to Aboriginal people whose lives had been marred by past government policies of forced child abduction and assimilation.

But China has yet to acknowledge its treatment of Uyghurs in Xinjiang province, deemed a “genocide” by eight counties, let alone apologize for its “Happy Heart” boarding schools.

The children of New Denver are also still waiting for their apologies.

This article was originally written and presented to the War and peace conference at Bordeaux Montaigne University in Bordeaux, France, organized by Professor Bernadette Rigal-Cellard.