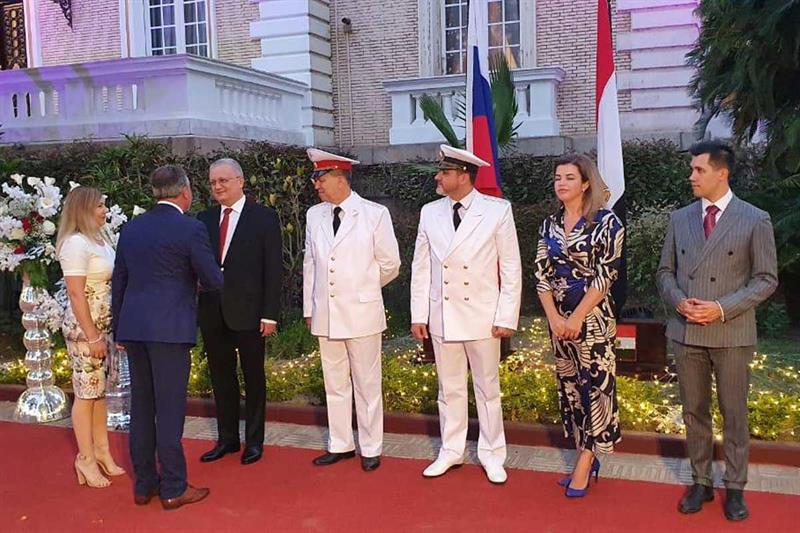 To mark Russia’s National Day on June 12, Russian Ambassador to Egypt Georgiy Borisenko hosted a lavish reception on the banks of the Nile at the Russian Embassy for the first time after a three-year hiatus.

The holiday marks the day in 1990 when the Chamber of People’s Deputies of the Russian Soviet Republic approved Russia’s declaration of sovereignty and the beginning of a new historical era.

In attendance were Khaled Abdel-Ghaffar, Minister of Higher Education and Scientific Research and Acting Minister of Health; Minister of Supply and Domestic Trade Ali Moselhi; Abdallah El-Battesh, Deputy Minister of Youth and Sports; engineer Abdel-Hakim Gamal Abdel-Nasser, son of late President Gamal Abdel-Nasser; as well as a host of foreign ambassadors, representatives of the diplomatic corps and public figures.

In a warm and friendly atmosphere, Borisenko addressed the guests, noting in his speech that Russia is currently opposing those who want to return the world to its colonial past, eradicating the newly sprouted Nazism in Europe, relying on its cooperation with African and Asian countries. and Latin America and strengthen its strategic partnership with Egypt.

“Russian-Egyptian relations are developing successfully and we are working together to stabilize the Middle East and North Africa region and develop economic cooperation, including the construction of the first nuclear power plant in Egypt,” Borisenko added. .

As part of the reception, two thematic photo exhibitions were organized, devoted to the history and current stage of Russian-Egyptian relations.

Guests also enjoyed a musical performance by the group Sweet Sound, led by artist Mounir Nasr El-Din, former dean of the Cairo Conservatory and graduate of the Moscow Conservatory, who performed a variety of famous works by Russian composers and Egyptians. A video about Russia, its history and its tourist attractions was shown on the big screen.