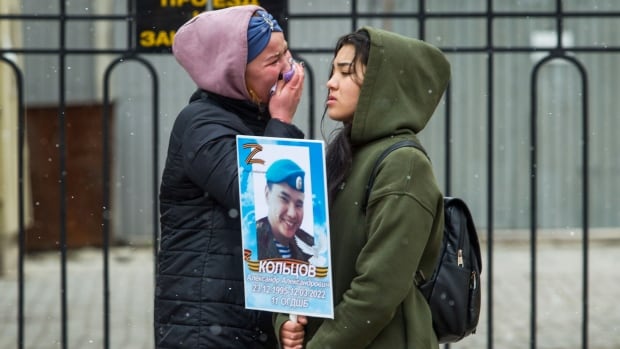 For about seven months, Aleksey had been largely spared the war in Ukraine. Like many others in the big cities of Russia, he was able to continue working and living his life.

But that changed in mid-September, after Aleksey boarded a flight to his hometown of Ulan-Ude, the capital of the Republic of Buryatia, located around Lake Baikal in Russia’s Siberian region. (Aleksey is not his real name; CBC agreed to change his name to protect him from possible reprisals.)

Aleksey was leaving for a short trip to visit friends and family he hadn’t seen since moving out west a few years ago. The roughly 6,000 kilometers between the two regions means that planes sometimes stop over in countries south of the Russian border.

It was one of those flights, which meant that Aleksey had to take his passport with him, which he would later be extremely grateful for.

This is because on September 21, Russian President Vladimir Putin announcement a partial mobilization of 300,000 reservists – young men who had previously gone through the country’s compulsory conscription – in order to continue the war in Ukraine.

While Putin has said the mobilization is national, those most affected are Russia’s ethnic minorities – among them the people of Buryatia (called Buryat).

Aleksey had spent a few days in Buryatia before Putin’s televised speech, hoping the president’s decision would not lead to mass conscription of his people.

“We always had hope that all of this would work out, the draft notices wouldn’t come,” Aleksey said.

But it wasn’t worth taking the risk of waiting. That night, he and his friends quickly packed up and coordinated their escape. Aleksey’s international flight to Buryatia meant he had his passport with him, making a last-minute departure from Russia possible. The next day, he and his friends left.

But not all Buryats have the same luck.

The recent Russian mobilization comes as Ukraine reclaims a growing percentage of its previously lost territory. Ukrainian President Volodymyr Zelenskyy praised the merits of the army recent counter-offensive victory at Lyman on Saturday, as videos of Ukrainian soldiers knocking down Russian flags and raising their own began circulating.

Melissa Chakars, a professor at Saint Joseph’s University in Philadelphia and an expert on Buryatia and the Mongol peoples of Russia, called the mobilization a “great change in warfare”.

“[Putin] claimed that [drafting] was going to be spread across all regions, so people were expecting a certain percentage of people from each region [were] going to be taken,” Chakars said.

She said that while residents of the most central cities, particularly Moscow and St. Petersburg, had been able to operate without much fear of conscription, the announcement of Putin’s mobilization had “changed things”.

The protests, which had largely waned since the first days of the invasion in February, erupted across the country and prompted an exodus of nearly 300,000 Russians to neighboring borders within five days of Putin’s televised address, according to information from Novaya Gazeta. Novaya Gazeta, whose editor is Nobel Peace Prize laureate Dmitry Muratovwas forced to cease operations in early September due to the war and now operates in exile outside of Riga, Latvia.

As Russian men in metropolitan areas were now conscripted, the mobilization largely reinforced existing trends in terms of which populations provided the most fighters.

At the start of the war, indicated ratios many men from Buryatia were sent to fight in the war. The area also suffered a significant number of casualties. As of September 23, 275 identified Buryatian men had been killed in the war, according to an independent count by Mediazona and the BBC News Russian service.

The only Russian region with a higher casualty rate is the Republic of Dagestan, with 305 identified men killed in action. However, the total population of Dagestan is over three million; Buryatia has less than a million.

Although the Buryats are indigenous to the region, with their own language, many of them never learn this language and only speak Russian.

The reason for high recruitment rates in ethnic regions, especially Buryatia, is twofold.

First, communities in Buryatia are largely clustered around Lake Baikal, and recruiting men from more remote parts of the country means any potential opposition to the war would likely come far from Moscow or St. Petersburg, Chakars explained.

The other part of the story is that these areas are generally low income.

“Buryatia is one of the poorest regions in the entire Russian Federation. Traditionally, the army is steady work,” Chakars said.

“People of different age groups were getting it, people with disabilities and even people who are no longer alive,” she said. In at least one report, a man who died two years ago from COVID-19 received a draft notice.

“They catch everyone they can and send them to war,” Garmazhapova said. “It is not a partial mobilization, but a total mobilization.”

According to reportsbetween 3,000 and 5,000 men were mobilized from Buryatia on the first day of the announcement.

A man summoned an officer and a teacher to his front door in the middle of the night between September 21 and 22. He received the draft notice and was forced to sign it, Garmazhapova said.

Under current law, citizens are required to open the door to the police. Citizens are also legally required to report to conscription offices once they have been served and sign their draft notices. But some began to refuse to open their doors.

Garmazhapova tells the story of another man who did not open his door to the officers who wanted to serve him his summons. Eventually they left and the man thought he had avoided being sent to war.

WATCH | Russian men head for the borders to avoid the draft:

Those crossing the Russian-Georgian border explain why they chose to leave, after Vladimir Putin’s order to mobilize hundreds of thousands of reservists for the war in Ukraine.

“Without his things, without his documents, they took him away,” Garmazhapova said. “The car was left at the gas station and his relatives had to come and take the car home. There are many stories like this.”

In a rare social media video, Yanina Nimaeva from Ulan-Ude speaks to Buryatia leader Alexei Tsydenov to explain why her 38-year-old husband and father of five, who had never served in the ‘army, was served with a draft notice.

News of these events prompted many young men to pack their bags and head for Buryatia’s closest borders – Mongolia and Kazakhstan.

Part of FBF’s job was to help with evacuation efforts, coordinating transportation and bringing Buryat men back to borders. Once the crossing is over, representatives of the foundation help the young men to find accommodation, food, food and work.

“It was very sad to watch them… You understand that they are very young boys who had no intention of leaving,” Garmazhapova said, recounting how she helped men settle in Astana, Kazakhstan. She said their average age was between 20 and 22.

“It’s almost as if you could imagine their parents throwing their kids on the last train that’s leaving, just to save them.”

Many soldiers sent to the front lines of the 2014 war in Ukraine were also from Buryatia, including many tank operators.

As a result, Garmazhapova said many had gained notoriety as “Putin’s Buryat warriors”. A pro-Kremlin video from 2015 featured a few Buryats talking about their support for Putin and their willingness to fight for him.

“Before, when people asked what is Buryatia, or who are the Buryats, it took a lot of time to explain the place. You had to explain that Buryatia is near Lake Baikal, near Mongolia,” said said Garmazhapova.

“But now, if you say you’re Buryat, people immediately say, ‘These are the people who are fighting for Putin in Ukraine.’ It’s very negative and it’s a bad reputation.”

She said that the last war again threw the Buryat soldiers “into the meat grinder”.

The FBF was created in March 2022 with the release of an anti-war video featuring Buryats around the world that contradicted the idea that Buryat soldiers were willingly fighting for Putin.

“Unexpectedly, this video garnered a million views and Buryat [people] started writing to us: ‘Oh my god, finally someone [else] say that I am against the war. I thought I was the only one,” Garmazhapova said.

The FBF was inundated with messages, first of support, then of calls for help to get soldiers out of the war. Mothers began writing to the organization asking how to cancel the military contracts of their sons who were on the front line or about to go.

Garmazhapova said she managed to help some soldiers cancel their contracts and return home. However, with mobilization, their most effective way of supporting the men was to help them settle into new homes outside of Russia.

She hopes these men will one day be able to repay countries like Kazakhstan and Mongolia, which have given them a new home.

In the meantime, she encourages Buryats to start learning Kazakh.

“Even the most basic sentences,” Garmazhapova said, “is a sign of respect for their language.”