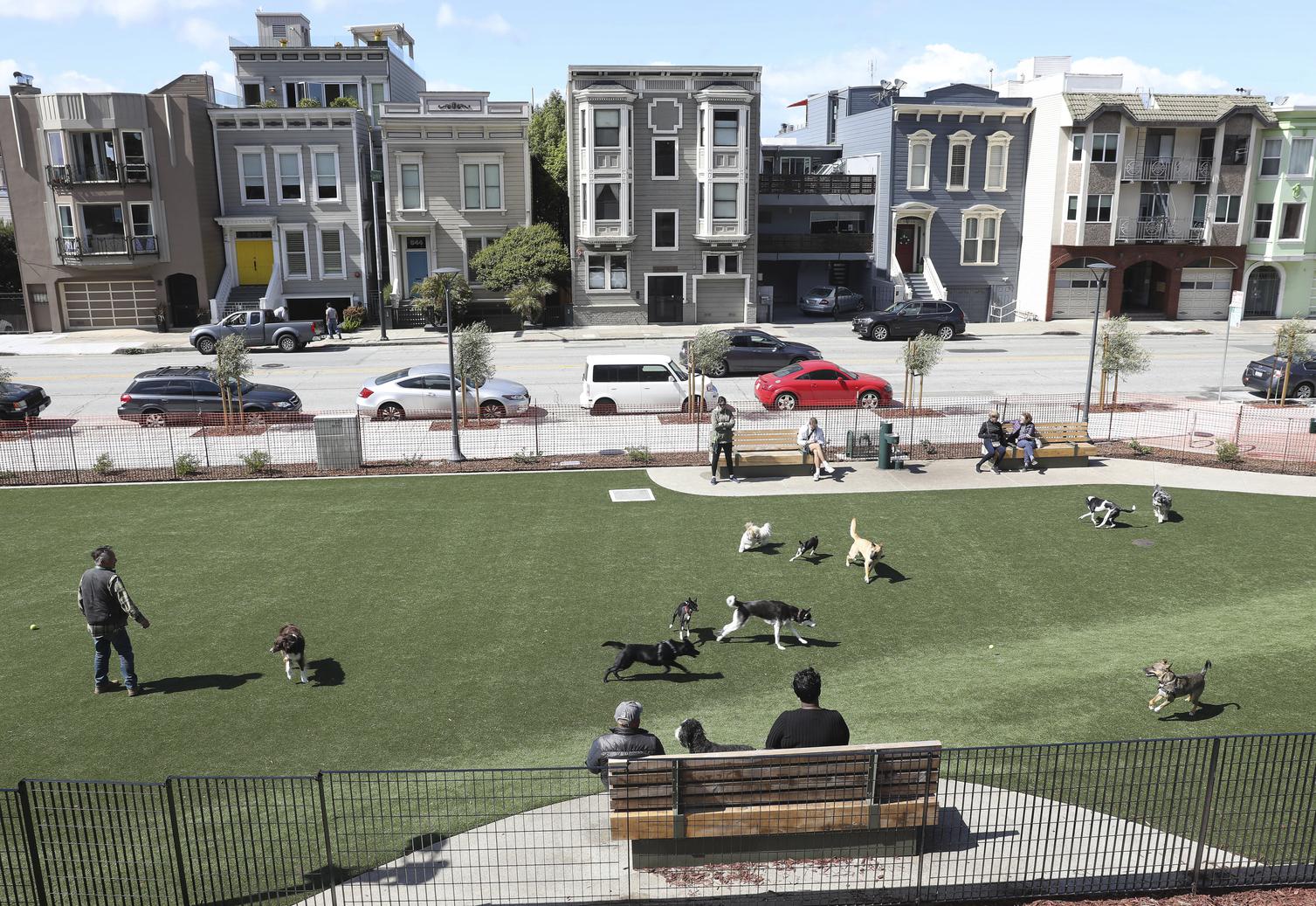 In a way, it’s only fitting that San Francisco’s newest public park, and largest added to the city’s northeast corner in decades, exists in a wealthy neighborhood and was funded by private donors.

We can all enjoy the scenic views. Or the serpentine walkway that allows a person in a wheelchair to climb a 35-foot slope. There’s no charge to explore 4.5 acres where the sprawling dog park rivals the size of the tiered playground.

Fundamentally, however, Francisco Park exists because the people of Russian Hill had the time and money to make it happen – which also means that other options, such as setting aside some of the land for much-needed housing, have failed. never seriously discussed.

This does not diminish the generosity of donors, nor the value of the public resource that has been created. But it’s a reminder that stories of urban well-being are rarely as simple as they seem.

Another attraction is the setting, which is old school San Francisco. The eastern edge of the park borders a steeply angled block of Hyde Street where the cable cars ascend and descend on their journey from Powell Street to the water park. The Golden Gate Bridge spans a view. Alcatraz seems close enough to be hit. This castle-like clock tower rises between Place Ghirardelli.

Residential towers from the 1960s are also visible, not quite so romantic, which show what could have been here instead of a park.

It nearly happened in 1958, when Mayor George Christopher backed what The Chronicle called a “super apartment building development” with two 24-story towers above an 800-mile parking lot. squares. The land was under the jurisdiction of the city’s Public Utilities Commission, which no longer needed it, and developers were eager to remove it from city hands.

But even then — years before the Fontana Towers rose next to Ghirardelli Square and triggered the first heavy height restrictions in San Francisco — neighbors were apoplectic. Christopher backed off.

The jagged hill has languished ever since, and that’s a good thing: the park that opened on April 27 is one of a kind.

The layout alone is unique, with four east-west levels that begin with a slope covered in a grove of poison oaks and blackberries; it is off-limits to visitors and will survive as a remnant of Russian Hill’s natural habitat and topography. Next is Francisco Park’s main draw—the large lawn, playground, and picnic tables on the plateau that once housed the reservoir.

There is another downward slope, this one planted in drought-tolerant native shrubs like manzanita and coffee berry interspersed with irises and ferns. The park ends at Bay Street, where an elongated, bean-shaped dog park has previously been discovered by professional walkers.

Besides the upper-level views, the most distinct feature is the 450-foot-long pedestrian bridge that begins near the lawn and then descends over the planted slope before touching the ground near Bay Street. This insertion is muscular and attractive at the same time, supported by thick round concrete columns strong enough to support the metal framework of a 10-foot-wide path.

It’s also the kind of frills that no public agency could have justified because of the expense. Which brings us to the corner of Russian Hill.

The park was built and funded by the Francisco Park Conservancy, which was discovered by neighbors who spent years lobbying City Hall to have the site transferred from the Public Utilities Commission to the Department of Recreation and Parks. from the city. A remnant of the tank’s concrete form now houses a donor wall where you’ll find many of the town’s monetary names. (A listed family, the Sangiacomos, owns a tower next to the park at Hyde and Chestnut streets. Monthly rents start at $3,850.)

The reserve will also staff a full-time park maintainer, providing salary and benefits until 2066.

While Rec and Park oversaw the project, the reserve led the community process that determined the size and details. And this is where the angle of the case comes into play.

Should the upper reservoir site have been turned into a park? Absolutely. Its preservation is a gift for the city. But the lower part could have played a different role – as land for affordable housing.

It’s easy to imagine a scenario where Bay Street was lined with four- to five-story apartment buildings, similar to what already exists across the street, with the project being subsidized in part by the city providing field. A smaller version of the dog park could be uphill, adding to the already bustling scene.

A nonprofit developer floated the idea, but it never caught on, and the oversight board unanimously approved the plan in 2016. Since all the debate had been at the neighborhood, there was no forum to consider broader civic needs.

I do not say this to minimize the result, which is absolutely worth the detour. The success of conservation is on many levels: the bridge designed by BFS Landscape Architects with Mar Structural Design and built by Cahill Contractors shows that infrastructure can have two-finger pizzazz. Interpretive plaques designed by Paul Donald and written by Jennifer Raiser decipher less obvious aspects of the park, like an elaborate water recycling system.

But as San Francisco and other Bay Area cities face a future of growing housing need, we must rethink aspects of the landscape that we have long taken for granted.

This includes the idea that the quality of a park can be measured by its size. The real yardstick is how it is used – and whether a piece of land can provide shelter for people who have few other options.