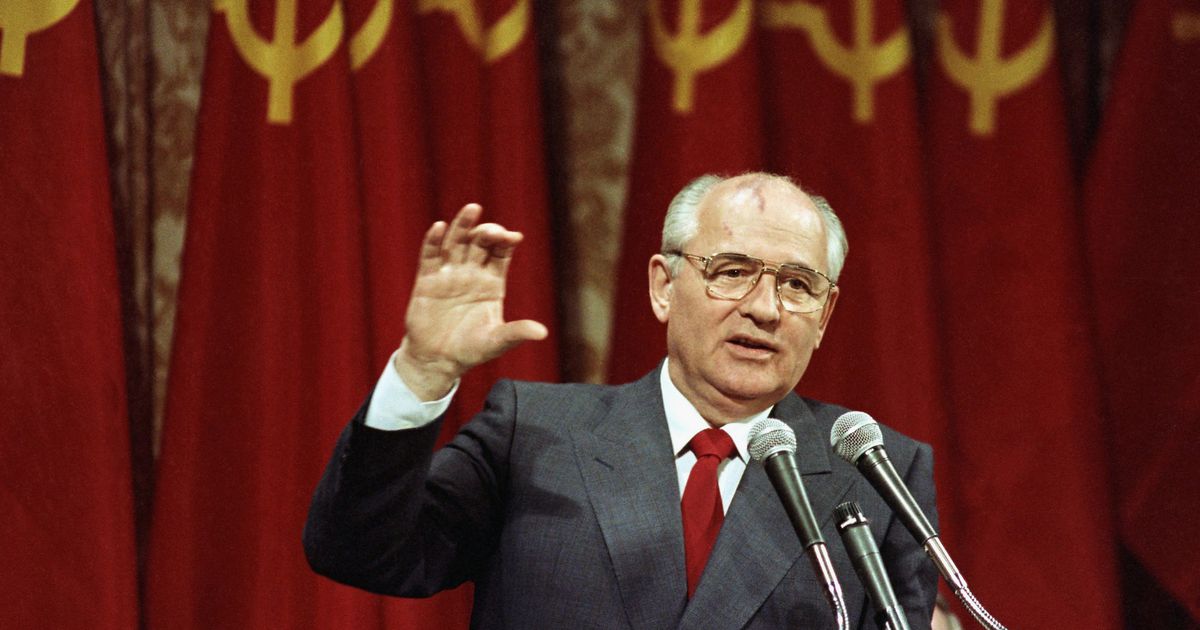 More than four decades in the information business offers a chance to meet hundreds of remarkable people – ordinary people, brilliant scientists and artists, and some real movers and shakers.

The man who died in Moscow on Tuesday certainly belongs to the latter category. There must be very few people in the world who have never heard the name of Mikhail Gorbachev, the last and only president of the Soviet Union. He changed the lives of millions – some of them, like me, are forever grateful; others are bitter and even hateful, reviling Gorbachev and his legacy.

Here are my three memories of meeting the former leader of a giant country that no longer exists.

As a rookie journalist for the Novosti news agency in Moscow, I was assigned to cover the visit of a Canadian delegation headed, if I remember correctly, by Governor General (Speaker of Parliament) Jeanne Sauvé. Canadians’ meetings with Soviet officials were expected to be polite, uneventful and rather boring, except that the Moscow side was represented by Gorbachev — a rising, dynamic and charismatic member of the ruling Politburo. which at the time had a relatively minor role in overseeing agriculture, but had already earned a greater reputation. He had traveled the world, was young – 53 years old, a quarter of a century younger than most Soviet leaders ranked before him. He smiled a lot and spoke freely, without looking at his notes.

The man did not disappoint. His conversation with Canadians quickly expanded beyond farming and harvesting to issues such as education, housing, international travel and individual freedoms. No, Gorbachev did not question the Communist Party’s baseline, and his answer to my only question about the US-Soviet arms race was essentially a version of Moscow’s refrain about a peaceful Soviet Union facing political obstinate and aggressive Westerners. “We are ready for a dialogue”, he said, “but we cannot ignore the NATO threat”.

Yet he obviously welcomed a discussion and knew how to listen to his counterparts. And, within a few years of becoming supreme leader in March 1985 – not yet as president but as general secretary of the ruling party – he overthrew much of what for many years was considered inviolable. . Among other things, he withdrew Soviet troops from Afghanistan, allowed multiparty elections, removed (albeit reluctantly and slowly) censorship from media outlets, and released previously banned films and books.

During his first years in power, Gorbachev was becoming popular among ordinary people, who actually read his speeches published in the newspapers and listened to him on the radio – a phenomenon unheard of for the Soviets who, for years, had no no interest in hearing what geriatric and dogmatic communist leaders had to say. In other words, he offered people hope that conditions might change for the better.

In May of that year, another unthinkable development occurred in the Soviet Union: the Congress of People’s Deputies, a new freely elected body of public authority, opened its doors as part of the ambitious agenda of Gorbachev. Suddenly, citizen-chosen delegates were freely discussing crucial issues without fear of being demoted or arrested. Many Communist Party candidates, including high-ranking officials, were not elected, even in some cases when they ran unopposed.

My job then was to interview anyone willing to speak between sessions in the foyer of the Kremlin Palace of Congresses.

And what a crowd it was: historians and authors whose books had been published for the first time after years of banning, former political prisoners, rebellious economists and politicians once penalized for their questioning of the Party Communist. In these corridors you could see the tall, slightly bent figure of Nobel Peace Prize laureate and key critic of the Soviet regime Andrei Sakharov, whom Gorbachev allowed to return from exile, and (still young and vigorous at the time but demoted from a work summit — by Gorbachev himself) Boris Yeltsin.

And, of course, there was Gorbachev. Always in a hurry, with a serious and determined expression, this leader, who ushered in glasnost and perestroika and helped end the Cold War peacefully, was hard to catch for even a brief interview. “What are you asking me? was his answer to my question about what other changes we should expect next. “Are we going to abandon the socialist principles of economic justice and equality? The answer is no!”

Not everyone in those halls was enthusiastic about Gorbachev’s reforms. Marshal Sergei Akhromeyev, one of the main Soviet military leaders, gave me an angry lecture about the glorious and powerful Red Army which is always ready to defend the Soviet Union against Western aggressors. “Remember that all of us in the military, myself included, will gladly lay down our lives for our socialist homeland,” he said. A few years later, after the failed coup attempt by hardline Communists in August 1991, Akhromeyev committed suicide.

(Rick Egan | The Salt Lake Tribune) Mikhail Gorbachev discusses Russia’s past and future at Kingsbury Hall at the University of Utah in 1996.

In October 1996, Gorbachev, then a five-year ex-president, was invited by the Utah World Affairs Forum to speak at Kingsbury Hall at the University of Utah. Before his speech, he and his wife, Raisa, attended a reception. They were running late, and the Utah dignitaries gathered at the Little America Hotel were growing impatient. Yet when the pair, surrounded by their entourage, finally appeared, it was clear the man was a world leader for a reason.

As soon as the Gorbachevs entered the room, the atmosphere changed. Everyone was relaxed, smiling, hoping to shake Gorbachev’s hand and strike up at least a short conversation. He didn’t mind at all, patiently listening to countless presentations. Obviously he didn’t remember me and our brief conversations from long ago, but he asked a few polite questions on the Salt Lake Tribune.

Later, during his speech at the U., he seemed like a different person. Tense and angry, he blamed then-President Yeltsin for everything wrong with Russia – from widespread poverty to the devastating war in Chechnya. Part of that was most likely that he was still uneasy after his ill-advised run for president earlier that year. Gorbachev’s campaign was basically ignored by Russians and the Russian media. He got 0.5% of the overall vote.

In the following years, Gorbachev practically disappeared from public life. He remained in charge of the Gorbachev Foundation and regularly traveled the world to deliver speeches. In 2004, he attended President Ronald Reagan’s funeral in Washington, but otherwise slowed considerably, especially after the death of his wife in 1999.

He gave his opinions, but his voice had lost its resonance, and the fact that he often back-and-forth on key issues, such as his views on Vladimir Putin’s politics, didn’t help. He has not spoken publicly about the war in Ukraine, although his foundation called on February 26 for a “swift cessation of hostilities”.

His life was rich and tragic, leaving a great and sometimes contradictory legacy.

“It’s hard to be a reformer,” Raisa Gorbachev told me at that reception in Utah 26 years ago. It certainly is.

Michael Nakoryakov is the printing manager and copy bureau chief of the Salt Lake Tribune. Before 1991 he worked as a journalist in Moscow.