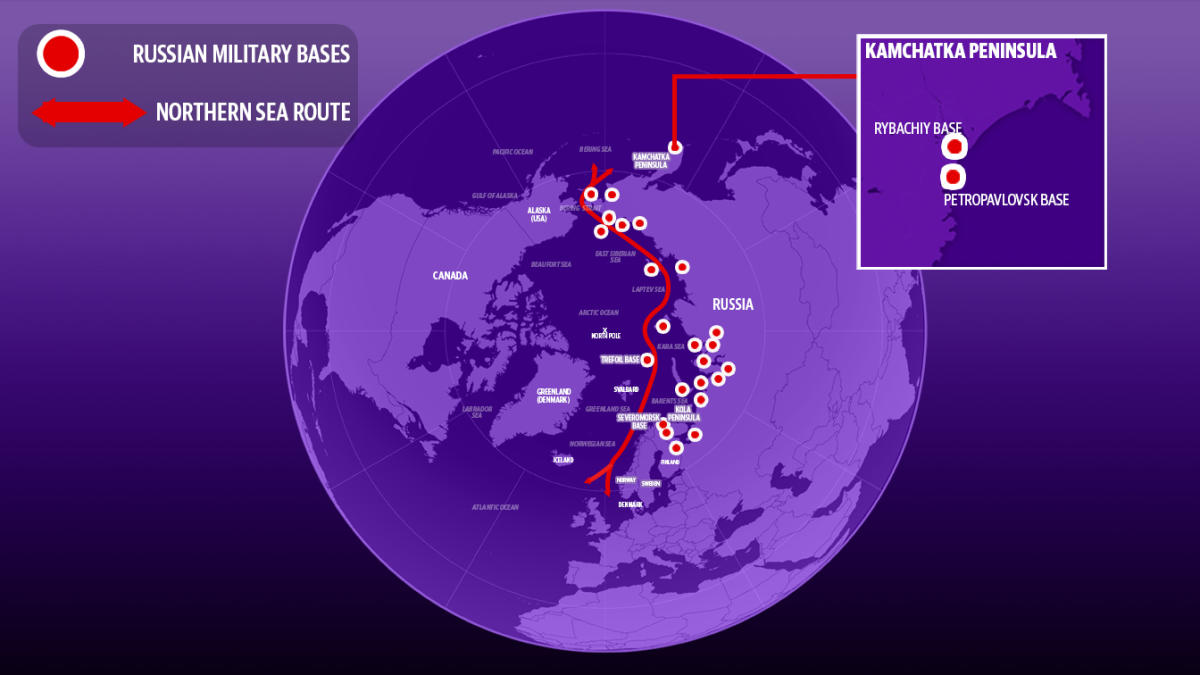 In late May, Russian Ambassador-at-Large Nikolai Korchunov informed state media that the situation in the Arctic was becoming perilous. He was not referring to the melting of polar ice due to climate change. Instead, he warned of “a very worrying trend that is turning the Arctic into an international arena for military operations”, and accused NATO of expanding its footprint in the region.

“It’s a typical Russian piece,” retired Finnish Major General Pekka Toveri told Yahoo News. “Western activities in the Arctic have been very mild.” In March, however, NATO organized a “Cold Response exercise” in Norway. With 35,000 fighters from 28 countries, it was NATO’s largest Arctic exercise in 30 years. Yet the alliance, unlike Russia, has no new plans for standing forces or military bases in the region, Toveri said, while acknowledging that “more patrols and more exercises have given Russia a reason to point the finger and claim that the West is the problem”.

Western experts say Russia, the largest of the seven countries surrounding the Arctic, is behind the militarization in the mineral-rich region, which provides 20% of Russia’s GDP. Over the past decade, the Kremlin has reorganized closed Soviet bases, forming a necklace of dozens of defensive outposts (some say more than 50) from the Barents Sea to the territories near Alaska, and building new facilities like the state-of-the-art Trefoil, its northernmost base which became fully operational last year. The United States and NATO have watched in dismay as Russia establishes a new “Arctic Command” and four new Arctic Brigades, renovates airfields and deep-sea ports, and continues to launch mock military attacks on Nordic countries between GPS and radar jamming during NATO. exercises. According to the US State Department, he also tried “new weapons systems” in the Arctic.

“We have seen an increase in Russian military activity in the Arctic for some time,” a senior State Department official told Yahoo News. However, the situation is getting worse, and not just because Russia continues to test new hypersonic weapons in the Arctic, launching a hypersonic missile there just days after Korchunov made his remarks. Before the end of the year, the State Department official added, Russia plans to launch 19 more tests, including new weapons. “Seeing Russia’s aggressive and unpredictable behavior, especially since the invasion of Ukraine, has really heightened concerns about Russian activity” in the High North, the official said.

With relations between Moscow and Western governments at their frostiest in decades due to Russia’s invasion of Ukraine, analysts wonder whether the Arctic will become the next flashpoint. Russia’s base expansions, weapons tests and troop increases in the Arctic come as Finland and Sweden have applied for NATO membership. If accepted, it would further isolate Russia in the Arctic, making it the only non-NATO country in the region, further increasing the risk of unintended incidents, analysts say.

Author of the recently published report “The Militarization of Russian Polar Policy”, Mathieu Boulègue, a researcher in the Russia and Eurasia Program at Chatham House, told Yahoo News that his greatest fear was a nuclear accident in the region.

“If you look at the long list of nuclear assets – whether it’s icebreakers, strategic submarines, floating nuclear power plants or spent fuel – there’s a lot of potential for nuclear incidents,” did he declare. “Incidents like this are mitigated in times of peace, when you talk to the various stakeholders. But the problem is we don’t really talk [with] Russia very well these days. This therefore further increases the risk of miscalculations and mistakes.

The Kola Peninsula, for example, an inch of Russian land the size of Kentucky adjoining Finland, is the most nuclearized place on the planet. Headquarters of the Russian Northern Fleet, which accounts for two-thirds of Russia’s second-strike maritime nuclear capabilities, the Kola Peninsula marks the entrance to the Russian part of the Arctic and is home to three military bases and depots. ‘nuclear weapons.

However, another third of Russia’s nuclear weapons at sea are at the eastern end of the Arctic, Boulègue added – with Russia’s Pacific Fleet, headquartered in Vladivostok, but some ships based in Kamchatka, just across from Alaska. These facilities could pose future problems for the United States, Boulègue said, by creating “a hotbed of tension, should Russia decide to contest American access to the Arctic.”

Ian Williams, deputy director of the missile defense project at the Center for Strategic and International Studies, also points to Wrangel Island – 300 miles from Alaska – where Russia has installed a new air search radar system and could retrofit a airfield, as well as bases in Eastern Siberia. “They’ve got a lot of places to put stuff if they want to threaten Alaska,” he noted.

Growing concern over Russian activities in the Arctic, where it is pursuing a new northern sea route made possible by melting ice due to climate change, has prompted US armed forces to rethink their Arctic strategies. Last year, the military released “Regaining Arctic Dominance,” its first strategic plan for the High North. Army personnel have also begun training more frequently in Alaska, learning to fight in the brutal polar climates — where temperatures can drop to minus 50 degrees Fahrenheit.

The US Navy is conducting maneuvers in the Arctic with ships and submarines and more – and the Air Force is sending the bulk of its F-35s to Alaska, saying the state “will be home to more advanced hunters than anywhere else in the world”. Congress has approved funding for six new “icebreakers,” ships capable of traversing frozen waters. And new satellites to improve polar communications and provide new “eyes” on Russia are being launched, along with new radar systems being built from Alaska to Denmark.

All of these moves are welcomed by Toveri, who believes the West cannot appease Putin and expect “to have the peace dividends of the Cold War era.” He added that after the fall of the Soviet Union, many Nordic countries, including Sweden, cut military personnel and spending, while countries like Denmark shut down their missile defense radar systems, that they are rebuilding again.

Such moves, however, irritate Russia, which views them as provocative. Earlier this year, Russian spy planes violated Swedish and Danish airspace. In March 2018 and February 2019, Russian bombers targeted Norway’s Globus radar system in mock air attacks, heading towards the domed structures before abruptly turning back. However, Russia’s problems with Norway go far beyond its espionage activities.

The Norwegian archipelago of Svalbard, located halfway between Russia and Greenland, is a good example. Beyond Russia’s historic territorial claims to the region, the archipelago is also home to a radar and satellite system capable of tracking the trajectories of ballistic missiles, seen as key to NATO communications. Russian politicians sometimes threaten to seize the archipelago, as they did with Crimea.

“If there’s going to be a dispute in the Arctic, it’s probably going to be here,” CSIS’s Williams said, and the US State Department official underscored that concern.

Timo Koivurova, a research professor at the Arctic Center at the Finnish University of Lapland, told Yahoo News that he laments that “relations between Russia and Western states have deteriorated and the thought of the Cold War has begun to prevail”. He wonders, however, if the concerns are not exaggerated. “If you talk to a security expert, he might say that World War III came from the Arctic. But it’s very hard for me to imagine that because if you think about Russia’s military goals in the region, there aren’t a lot of military drivers for Russia, other than that kind of balancing with the NATO.

Williams also sees many parts of the Arctic picture as undecided, including US military involvement in the region, which is a costly undertaking.

“Operating an F-35 in the Arctic is much more expensive than operating it in Hawaii,” he said. He notes that the United States is concerned about Russia’s strong arms control of the Northern Sea Route, an act that the United States says violates international maritime law. “The big question is, would we expand into this area? For now, this is an open question. »

“The last thing Russia needs is a hot war in the Arctic,” Nima Khorrami, an associate fellow at the Arctic Institute, told Yahoo News. “Because if that happened, no one would come to invest.” And right now Putin, who has inscribed the idea of ​​Russia’s Arctic identity into the national psyche, wants Asian investment in the region, he said. Any kind of military confrontation, Khorrami added, “and the grand strategy of turning the northern sea route into a new Suez Canal is over.”