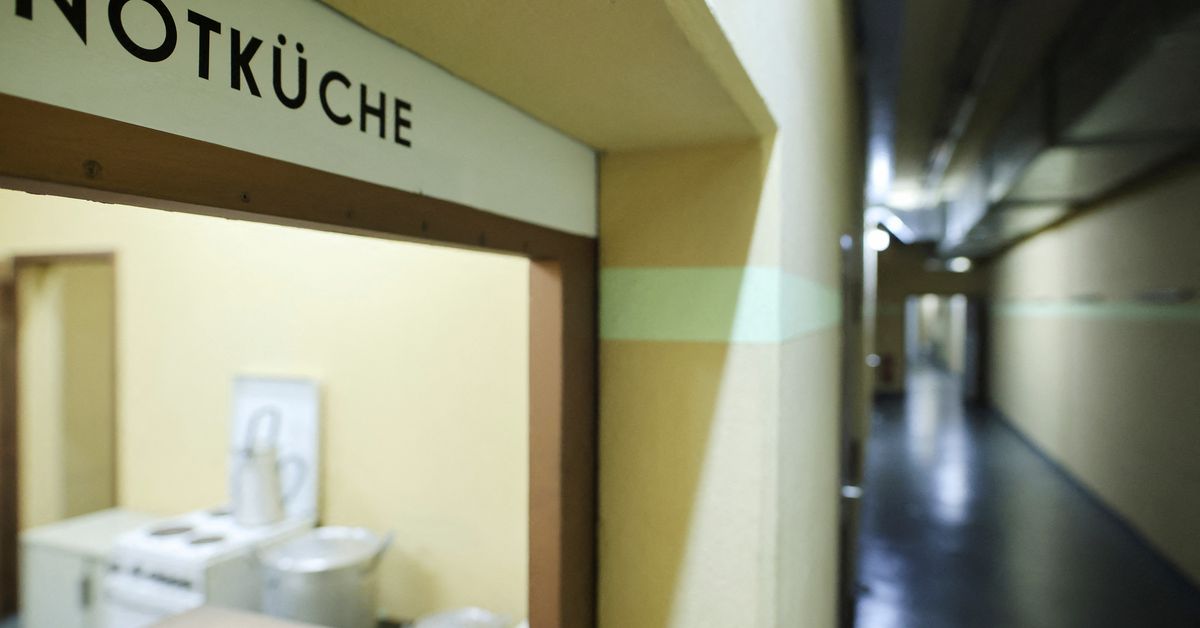 COLOGNE, Germany, Oct 27 (Reuters) – Deep in a disused nuclear bunker built in a Cologne metro station at the height of the Cold War, tour guide Robert Schwienbacher says he receives a number of requests of Germans asking for available space in an emergency.

The worries of Germans that dissipated with the fall of the Berlin Wall are now returning after decades of peace. It is a step back for a nation that found itself at the geographic and political center of the Cold War.

President Vladimir Putin has stepped up his “special military operation” in Ukraine in recent months, calling up reservists and threatening to use nuclear weapons to defend Russian land, while US President Joe Biden has spoken of “Armageddon”.

“No one should use nuclear weapons,” German Chancellor Olaf Scholz warned earlier this month.

A few days later, a investigation by the insurer R+V found that 42% of Germans now fear a war with German participation, up from 16% last year, the biggest jump since the Kosovo war in 1999.

With the Ukrainian border less than a nine-hour drive from Berlin, war seems uncomfortably close to many, although there is no imminent threat on home soil.

The Russian-Ukrainian conflict has nonetheless prompted a rethink in a nation that was a major beneficiary of the thaw between East and West after the fall of communism more than 30 years ago.

Schwienbacher said requests for bunker space, whether by email or verbally, on every tour he gives have only started since the war and give him reason to reflect.

“I’m only human and I’m also afraid it will get worse,” Schwienbacher said.

“Germany is a flashpoint in Europe,” he said to the hum of fluorescent lights in the dark bunker.

Lars Pohlmeier, a German doctor once held behind the iron curtain as a teenager, said he was relieved that his 15-year-old son was going to Canada for studies.

“If I ever felt like we were on the brink of annihilation, it would be now,” he said.

The former West Germany built 2,000 public bunker-like “protective spaces” starting in the mid-1960s. In 2007, the government of a unified Germany decided to remove them.

But the conflict in Ukraine prompted Germany to keep the remaining 599, and its federal real estate agency is studying them for possible upgrades.

Meanwhile, the demand for private bunkers has skyrocketed.

Berlin-based BSSD, which installs such units, has seen its orders rise by at least 300% this year compared to previous years, spokesman Mark Schmiechen said.

“A change has taken place. Before, we were considered weird outsiders,” Schmiechen said. “Today we are plugged in.”

On the eve of German reunification in October 1990, Chancellor Helmut Kohl thanked Russian Mikhail Gorbachev for the thaw that led to a united Germany, saying the era before it should never be repeated or forgotten.

Felix Ludwig, born that year, is the curator of a museum at a former East-West highway checkpoint in Marienborn, where people died trying to flee East Germany. East.

“It feels like the fear of World War III is growing,” Ludwig said.

While some Germans are nervous, not everyone fears another Cold War.

Stuttgart Mayor Frank Nopper grew up next to neighbors who bought a vacation home in Spain to escape hostilities in Germany during the Cold War. He said his city felt closer than many German municipalities to the war in Ukraine because his region is home to two US military command centers.

“Although many people are worried and confused these days, they don’t feel any immediate threat – at least not yet,” he said.

Anxiety in Europe’s biggest economy is heightened by double-digit inflation and worries about energy shortages after years of heavy reliance on Russia for fossil fuels.

Eva Weber, mayor of the Bavarian town of Augsburg, said this month that she was prepare for various crisis scenarios which include cuts in electricity and heating, an exercise that takes place in all cities of Germany.

On December 8 at 11 a.m., all German sirens will sound in a test, on a second “warning day”, and on a first, text messages will also be sent to all mobile phones.

Cities near US military bases are particularly strained.

The mayor of Kaiserslautern, home to the US base at Ramstein, said Russia’s nuclear rhetoric is designed to stoke fears in the West and erode support for Ukraine.

Peter Degenhardt, mayor of neighboring Landstuhl, said he and his constituents feared a “hybrid war”.

Cologne was leveled during World War II by hundreds of air raids, although its famous cathedral remained standing.

In 1979, the city built its now disused bunker in the Kalk Post metro station. Above is a bustling neighborhood of Turkish travel agencies, barbers and restaurants. Below is a space designed for 2,366 people to survive for exactly 14 days.

Schwienbacher said temperatures would quickly rise to 37 degrees Celsius in close quarters without showers and small boxes of provisions that would have to be consumed over two days.

“It was built more to calm people down than to protect them,” Schwienbacher said.

In one of several emails sent to Schwienbacher and seen by Reuters, one person asks, “Are these bunkers still operational for us in the event of a possible war?”

After 14 days, diesel, water and other supplies would run out and, Schwienbacher said, people would be forced out, “no matter what it looks like on the outside”.

Covers German finance with a focus on big banks, insurance companies, regulation and financial crime, previous experience at The Wall Street Journal and The New York Times in Europe and Asia.