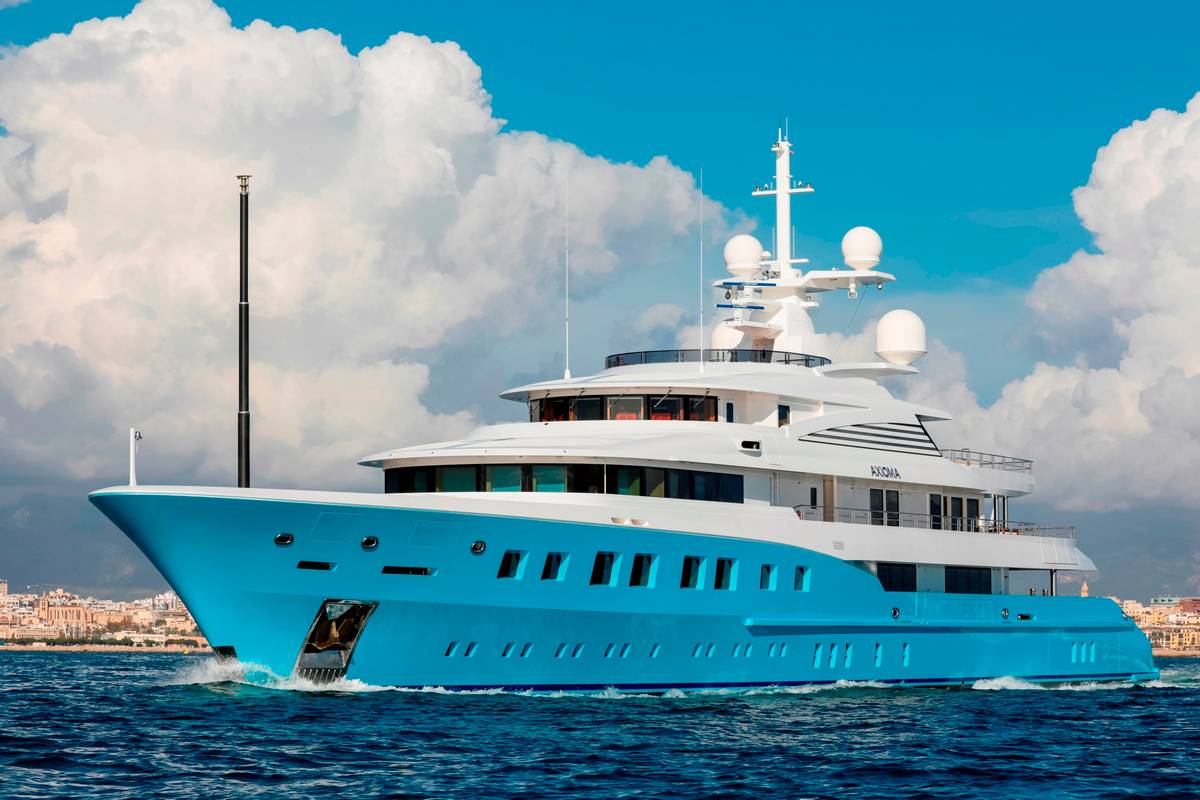 The arrested superyacht Axioma was the first of many seized Russian-owned luxury ships to be put up for sale. The $75 million vessel will be sold by Admiralty Court in Gibraltar in a private “as is, where is” auction on August 23, Boat International said. It is also specified that Howe Robinson will take care of the closing of the sale on the same day. Steel billionaire Dmitry Pumpyansky’s beautiful blue boat has been embroiled in controversy over a $12.5 million loan with investment bank JP Morgan Chase.

The latter obtained a court order authorizing the seizure of Axioma. The luxury motor yacht will now be sold without a reserve price, but the vessel is unlikely to go under the hammer for its $75 million market value. It will undoubtedly sell for more than the roughly $13 million owed to the bank.

Axioma the beautiful in blue:
Axioma has an open mezzanine, an elevator and a swim-up bar. The dynamic motor yacht flaunts an infinity pool, well-equipped fitness center, cinema room, steam room, sauna and massage rooms, with the most breathtaking views. There’s plenty to do on board for 12 guests relaxing in 6 luxurious cabins on the main deck.

The $75 million superyacht has hosted some of the world’s most renowned celebrities. It’s packed with amenities like a jacuzzi on the terrace, an owner’s suite with a private balcony, and an impressive arsenal of water toys. The six-story beauty owes its stunning interiors to Alberto Pinto, who is responsible for the clean, modern interiors.

Guest cabins and salons are fashion-forward with geometric influences and neutral hues, offering a wide range of amenities. The double-height atrium is a unique feature, featuring an exquisite ceiling reminiscent of ocean waves in golden details. The 236-footer is packed with lounges, inside and out.

Will Pumpyansky win back the luxurious Axioma?
With no reserve price when it’s sold, chances are the sleek ship will end up in Dmitry Pumpyansky’s lap. The $2.2 billion Russian billionaire businessman won’t flinch to get his prized possession back, especially if it sells for a much lower amount hovering around the $13 million loan amount. dollars. Pumpyansky started as a metal trader, rose through the ranks managing several metallurgical plants, then took over the Sinarsky pipe factory. He eventually succeeded by acquiring pipe conglomerate TMK and becoming 100% owner by buying out his partners. What ultimately happens with Axioma won’t play out until next month, August 23rd. The proceeds of the sale will be attributed to the Court of Admiralty; until then, this splendor remains moored in Gibraltar.