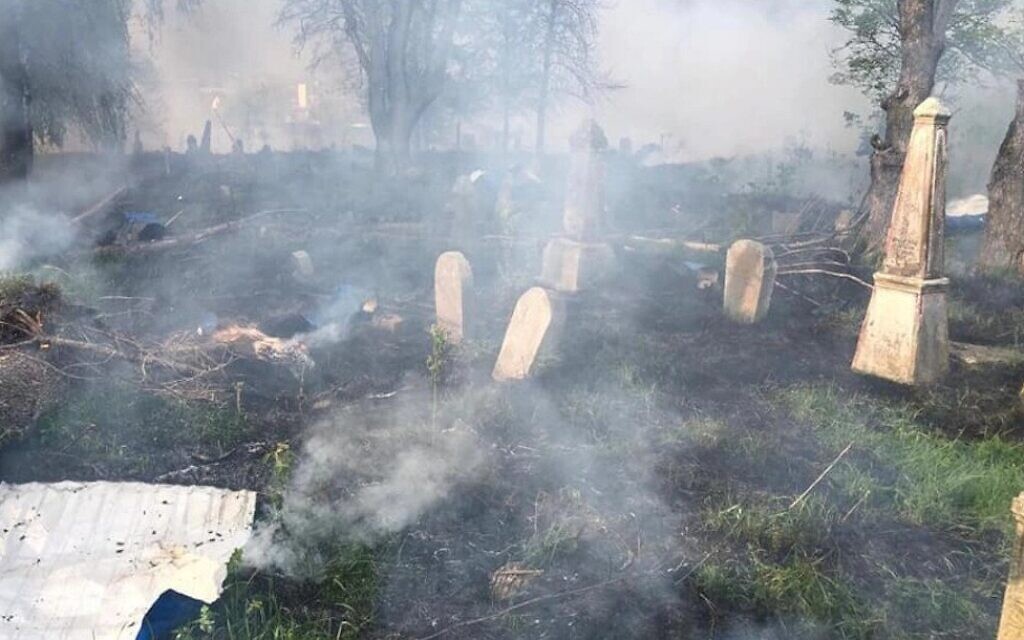 JTA — A Jewish cemetery in Hlukhiv, Ukraine, was reportedly shelled Sunday during fighting near the Russian border.

The cemetery, where around 1,500 Jews are buried, is the latest Jewish site to suffer damage in the 10-week war that began when Russia invaded Ukraine on February 24.

Many Jews buried in the cemetery were victims of a pogrom in 1918. Among them are Samuel Nokhimovich Shumyatsky, an older brother of a well-known rabbi, and a shochet, or butcher, named Ber Izrailevich Barkan, according to the site. information Ukrainian Kourier.

Ukrainian Culture Minister Oleksander Tkachenko said in a statement that influential rabbis are also buried in the cemetery.

“It is not just a monument of history, it is a special symbol for all Jewish people,” Ukrainian Culture Minister Oleksander Tkachenko said in a statement. “The proof that all the higher powers are on our side is that the tombs of the tzaddik leader [Hasidic spiritual leader] have survived. »

In the past, Jewish sites damaged by Russian bombing have become symbols for Ukrainians, who are struggling against Russians’ false claim that their country is ruled by the Nazis. At the start of the war, Ukrainian President Volodymyr Zelensky, who is Jewish, pointed to damage to a memorial for Jews murdered by the Nazis and their local collaborators in Babyn Yar, as well as bombings in Uman, a place of pilgrimage Jewish, as proof that Russian forces are trying to erase Ukrainian history.

At least one other Holocaust memorial, on the outskirts of Kharkiv, was damaged during the war. Meanwhile, the Hillel of Kharkiv, housed in a historical building in the center of this city, was also destroyed very early.

The sites do not appear to have been deliberately targeted, but were the victims of indiscriminate bombardment as part of Russia’s drive for change to control areas of Ukraine.

The Hlukhiv pogrom, also known in Russian as Glukhov, was one of a series of such events perpetrated during the Russian Revolution of 1917-1923, where some Tsarist nationalists and others viewed Jews as a hostile force. State archives speak of at least 105 victims in the Hlukhiv pogrom, although media at the time spoke of several hundred dead.

A historian wrote in 1923 about the 1918 pogrom in Hlukhiv: “Blood flowed in the river, they fired on the synagogue and tore up the Torah”.


We’re really glad you read X Articles from The Times of Israel over the past month.

So now we have a request. Unlike other media, we don’t have a paywall in place. But since the journalism we do is expensive, we invite readers to whom The Times of Israel has become important to help support our work by joining The Times of Israel community.

For just $6 a month, you can help support our quality journalism while benefiting from The Times of Israel WITHOUT ADVERTISINGas well as access Exclusive Content only available to members of the Times of Israel community.