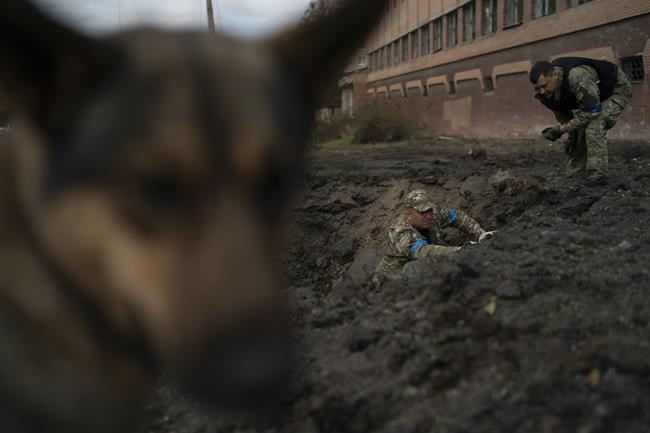 KYIV, Ukraine (AP) — A Russian strike on the Ukrainian city of Zaporizhzhia killed at least 23 people and injured dozens, an official said Friday, just hours before Moscow plans to annex more Ukraine in an escalation of the seven-month war.

Zaporizhzhia Regional Governor Oleksandr Starukh made the announcement in an online statement on Friday. He said there were at least 28 injured when Russian forces targeted a humanitarian convoy heading towards Russian-occupied territory.

He posted images of burnt-out vehicles and bodies lying on the road. Russia did not immediately recognize the strike.

The attack comes as Moscow prepares to annex four regions to Russia after an internationally criticized referendum vote and at gunpoint as part of its invasion of Ukraine. These regions include areas near Zaporizhzhia, but not the city itself, which remains in Ukrainian hands.

Starukh said the convoy members planned to travel to Russian-occupied territory to pick up their loved ones and then take them to safety. He said rescuers were at the site of the attack.

The annexation – and planned celebratory concerts and rallies in Moscow and the occupied territories – would come just days after voters reportedly approved Moscow-run “referendums” that Ukrainian and Western officials have denounced as illegal, forced and rigged.

Kremlin spokesman Dmitry Peskov told reporters Thursday that four regions of Ukraine – Luhansk, Donetsk, Kherson and Zaporizhzhia – would be incorporated into Russia at a Kremlin ceremony attended by President Vladimir Putin, who should make an important speech. Peskov said the regions’ pro-Moscow administrators would sign treaties to join Russia in the Kremlin’s ornate St. George’s Hall.

In an apparent response, Ukrainian President Volodymyr Zelenskyy called an emergency meeting of his National Security and Defense Council on Friday.

Zelenskyy also sought to capitalize on anti-war sentiment in Russia by releasing a special video aimed at Russia’s ethnic minorities, particularly those in Dagestan, one of the country’s poorest regions in the North Caucasus.

“You don’t have to die in Ukraine,” he said, wearing a black hoodie that read “I am Ukrainian” in English, and standing in front of a plaque in Kyiv commemorating what he called a hero of Dagestan. He called on ethnic minorities to resist the mobilization.

The United States and its allies have vowed to adopt even more sanctions than they have already imposed on Russia and offer millions of dollars in additional support to Ukraine as the Kremlin replicates the playbook of annexation that it followed when it incorporated Ukraine’s Crimean peninsula in 2014.

On Friday morning, Putin issued decrees recognizing the independence of the Kherson and Zaporizhzhia regions, steps he had taken in February regarding Luhansk and Donetsk and earlier for Crimea.

Ukraine reiterated its wishes to take back the four regions, as well as Crimea. For its part, Russia undertakes to defend all of its territory – including the newly annexed regions – by all available means, including nuclear weapons.

Russia’s partial military mobilization and allegations of sabotage of two Russian pipelines at the bottom of the Baltic Sea, designed to supply Europe with natural gas, are heightening tensions. Adding to the Kremlin’s woes are Ukraine’s success in retaking some of the land Russia is in the process of annexing and the mobilization problems that President Vladimir Putin acknowledged on Thursday.

Western supporters of Ukraine have described the orchestrated referendums on whether to live under Russian rule as a brazen land grab based on lies. They say some people were forced to vote at gunpoint in an election without independent observers in territory from which thousands fled or were forcibly expelled.

In unusually strong language, UN Secretary-General Antonio Guterres told reporters in New York on Thursday that Russia’s annexation would violate the UN Charter and had “no legal value”. He described the decision as “a dangerous escalation” and said it “must not be accepted”.

“Any decision by Russia to move forward will further undermine the prospects for peace,” said António Guterres.

As a permanent member of the UN Security Council with veto power, Russia bears “a special responsibility” to uphold the UN Charter, the secretary-general said.

In what would be a blow to Moscow’s war effort, the Washington-based Institute for the Study of Warfare said Ukrainian forces could soon surround Lyman, 160 kilometers (100 miles) south- east of Kharkiv, the second largest city in Ukraine.

“The collapse of the Lyman Pocket will likely be very important for the Russian grouping” in the northern Donetsk and western Luhansk regions and “could allow Ukrainian troops to threaten Russian positions along the west of Luhansk,” the institute said, citing Russian reports.