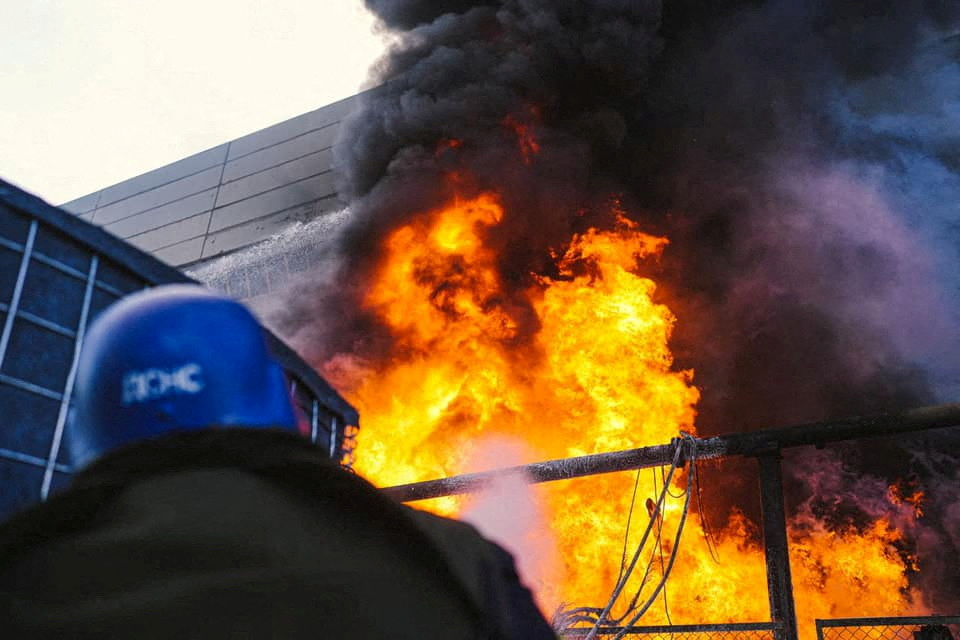 KYIV, Ukraine (AP) — Ukraine’s power grid chief warned Friday of hour-long power outages as Russia zeroed in on Ukraine’s energy infrastructure with heavy artillery and rocket attacks. missiles that cut off supplies to 40% of the country’s population at the start of winter.

“You always have to prepare for the worst. We understand that the enemy wants to destroy our electrical system in general, to cause long blackouts,” Ukrenergo general director Volodymyr Kudrytskyi told Ukrainian state television. “We have to prepare for possible long interruptions, but for the moment we are introducing planned times and we will do everything to ensure that the interruptions are not very long.”

The capital of Kyiv already faces a “huge electricity deficit”, Mayor Vitali Klitschko told The Associated Press. Some 1.5 to 2 million people – about half the city’s population – are periodically plunged into darkness as authorities switch power from one neighborhood to another.

“It’s a critical situation,” he said.

Klitschko added that Russian President Vladimir Putin’s military planners apparently hope “to get us, everybody, into depression,” make people feel unsafe, and “think about ‘Maybe we’re giving up. ‘”. But that won’t work, he said.

“It’s wrong, it’s (a) bad view of Putin,” he said. “After every rocket attack, I talk to people, ordinary civilians. They (are) not depressed. They were angry, angry and ready to stay and defend our homes, our families and our future. »

Kudrytskyi added that the electrical situation in critical facilities such as hospitals and schools has stabilized.

These facilities were targeted overnight in the northeastern region of Kharkiv, where energy equipment was damaged, according to Governor Oleh Syniehubov. Eight people, including energy crews and police, were injured trying to clear the debris, he said.

Moscow’s attacks on Ukraine’s energy and power facilities have fueled fears of what winter will bring. Ukraine’s energy infrastructure was targeted again on Thursday, two days after Russia unleashed a nationwide barrage of more than 100 missiles and drones that knocked out power to 10 million people.

These attacks have also affected neighboring countries such as Moldova, where half a dozen cities across that country have experienced temporary blackouts.

Over the past 24 hours, Russian forces have deployed the full extent of their arsenal to attack southeastern Ukraine, using drones, rockets, heavy artillery and warplanes that have killed in at least six civilians and injured six others, the president’s office said.

In the Zaporizhzhia region, part of which remains under Russian control, artillery shelled 10 towns and villages. The death toll from a Russian rocket attack on a residential building in the city of Vilniansk on Thursday rose to 10 people, including three children, according to the regional prosecutor’s office.

In Nikopol, located across the Dnieper from the Zaporizhzhia nuclear power plant, 40 Russian missiles damaged several high-rise buildings, houses and a power line.

Following its humiliating retreat from the southern city of Kherson, Moscow stepped up its assault on the eastern region of Donetsk, where the Russian Defense Ministry said on Friday its forces had taken control of the village of Opytne and pushed back a Ukrainian counter-offensive to recover the colonies of Solodke. , Volodymyrivka and Pavlivka.

The town of Bakhmut, a key target in Moscow’s bid to seize the entire Donetsk region, remains the scene of heavy fighting, the regional governor said.

The Russian Defense Ministry also said Ukrainian troops had been pushed back from Yahidne in Ukraine’s Kharkiv province and Kuzemivka in neighboring Lugansk province. Donetsk and Luhansk were among four Ukrainian provinces illegally annexed by Moscow in September, along with Kherson and Zaporizhzhia.

At the same time, Moscow is strengthening its defenses in the southern region to thwart further Ukrainian advances. Russian troops have built new trench systems near the Crimean border, as well as near the Siversky-Donets River between Donetsk and Luhansk oblasts, according to a report by the British Ministry of Defense.

Meanwhile, Ukrainian and international investigators were moving forward to uncover alleged war crimes committed by Russian forces during the nearly seven-month occupation of the Kharkiv region. Ukraine’s national police said on Friday that its officers had initiated more than 3,000 criminal cases against Russian troops.

A lightning Ukrainian counteroffensive in September reclaimed the Kharkiv region and pushed Russian forces back into Donbass, the industrial heartland in the east of the country, and regained strategically located towns including Izium and Kupiansk.

Reports of torture and other atrocities committed by Russian troops have also emerged from the southern region of Kherson, where Ukrainian officials say they have opened more than 430 war crimes cases and are investigating four alleged torture sites. .

Alesha Babenko, a 27-year-old man from the village of Kyselivka, said he was arrested by the Russians in September and locked in a basement, then beaten daily while tied up, blindfolded and threatened with electric shocks.

“I thought I was going to die,” he told the AP.

Kyselivka’s recapture after Russia withdrew last week has raised hopes in neighboring Mykolaiv province that they will once again have tap water, which was cut off after the village fell to Russians . But Mykolaiv administrator Vitali Kim predicted on Friday that it could be several weeks before the water supply is restored.

Hungry and cold, residents of Kherson lined up on Friday for food from a charity, with many saying they had nothing to eat and had no heat or electricity. A man said “all the fridges have defrosted, we have nothing to eat”.

Residents were further shaken on Friday after a missile hit the fourth floor of a building, reminding them that the Russian occupation may be over, but not the danger of Russian missiles.

“We didn’t understand what happened. There was an explosion…it was very scary. We can’t calm down,” said Tatiana Kruvorchko, a resident of the building.

Despite the enormous difficulties across Ukraine, a sign of hope emerged with the news that the first train from Kyiv to Kherson would leave on Friday evening. Ukraine’s Ukrzaliznytsia rail network said around 200 passengers will travel on the train – the first in nine months.

Dubbed the “Victory Train”, the train’s carriages were painted in eclectic designs by Ukrainian artists and tickets were sold as part of a charity project.

In Vienna, the Board of Governors of the International Atomic Energy Agency approved a resolution calling, among other things, for Russia to withdraw from the Zaporizhzhia nuclear power plant, the largest in Europe. Two countries voted against the resolution, Russia and China, according to the Russian ambassador.