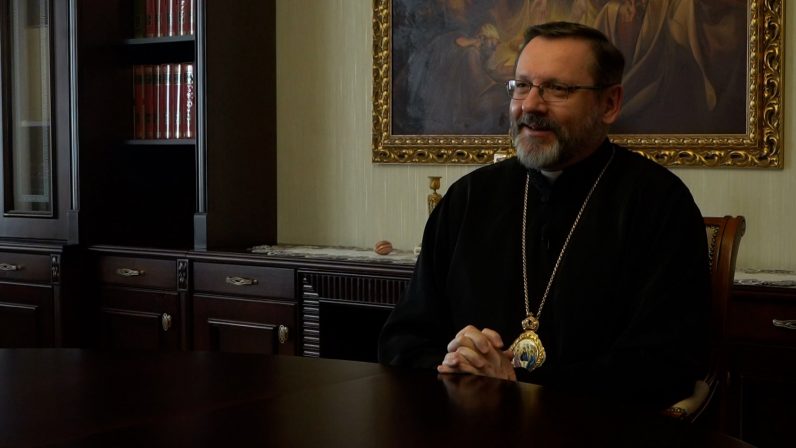 According to popular Italian blog Il Sismografo, the pope’s June 5 plea was the 52nd time he has spoken publicly about the war, which began on February 24. But, again, he did not name Russia as the aggressor or blame the tragedy at the feet of Russian President Vladimir Putin.

Archbishop Sviatoslav Shevchuk of Kyiv-Halych, head of the Ukrainian Catholic Church, is not so reluctant. He posted a video message every day during the conflict, condemning Russia and accusing its troops of following “a manual of genocide”.

The pope’s decision not to name and humiliate Russia has confused many inside and outside Ukraine.

So why the difference?

The pope has a different role.

“The Holy Father condemned the war, he made it clear who is guilty of it, how international law and human dignity are violated today, especially in Ukraine,” the Archbishop said. “But he is the universal pontiff so he uses a language which, on the one hand, can fulfill the prophetic mission of the Church and, on the other hand, can open all possible avenues for dialogue, for communication. This is why the pope speaks the way he does, although you can ask him,” he added with a smile.

Meeting children, especially from Ukraine, on June 4, Pope Francis also reiterated that the idea of ​​his visit to Ukraine was still under consideration.

“Work is ongoing on that,” Archbishop Shevchuk said, without giving details. “Let’s say that the communication between the Apostolic See and Ukraine is quite intense and solid. And I think we are all working so that one day the Holy Father will visit us here in Kyiv.

In the meantime, the archbishop is making a few visits himself, checking on people, priests and churches in towns liberated by the Ukrainian army.

“I visited our church in Irpin for the second time and was able to enter it after the (military) sappers cleared it. They found several exploded mines and one mine that had not exploded, so c t was good that on the first visit we listened to the advice of our military and did not go inside (any of the buildings), especially the presbytery,” he said.

A Ukrainian soldier reacts after paying his respects next to a mass grave with bodies of civilians in Bucha, Ukraine, April 6, 2022. Atrocities reportedly committed by Russian troops in Bucha and other towns are now making the subject of an international investigation. (CNS photo/Alkis Konstantinidis, Reuters)

“We have had no reports of dead priests” due to the Russian attacks, the archbishop said. As for material damage, it is too early to tell. “For example, it is said that the town of Volnovakha no longer exists, and we definitely had a church there. But we don’t have any information on the condition of these buildings at this time.

Archbishop Shevchuk said he started his daily video messages to let people know he was still alive and the church was with them. “Over time, of course, we were looking for a way to not only talk about breaking news and how, say, we survived the last night and the last day, but also to share the Word of God.”

War is clearly “a fight between good and evil”, he said, so he wanted to offer “brief reflections on various aspects of our life, our reality and the teaching of the church as it is very important for us to experience this tragedy in a Christian way.

In some parts of the country, the Archbishop said, people are returning to their homes, if they can.

“Those who have returned need the presence of their priests, they need spiritual life and help, including humanitarian aid,” he said.

One interesting thing, he said, is the ecumenical cooperation “in those cities where tragedies have happened. For example, our priest in Irpin has returned but cannot live in his house because it has been damaged. So the Roman Catholic priest welcomed him. He stays there trying to repair his house near our church and waiting for his family to return.

“I am personally very grateful to Evangelical Christians, Baptists, whose church is called Irpin Bible Church, as I recall. Thanks to their pastor, this community evacuated our priest with his family and many of our parishioners,” he said. “As I said to the priest, I would like to meet this pastor one day to shake his hand and thank him for such active Christian love.”

Of course, the Archbishop and his team also did what they could to help, including opening the Resurrection Cathedral and its basement as shelter when Kyiv was under constant bombardment.

Because there were so few suitable shelters in this part of Kyiv, he said, “there were days when almost 500 people spent the night there.”

“Our shelter also spontaneously became a kindergarten and a zoo – we had all kinds of animals there: cats and dogs and hamsters and parrots and fish”, because people brought their animals company with them, he said.

“War is a terrible thing, it is a great evil, a revelation of this ‘mysterium iniquitatis’, this mystery of evil of which Saint Paul the Apostle speaks,” the archbishop said. “But in the midst of the war, in the midst of this atrocity, there are still islands of compassion, islands of love, among Christians in particular, which give a glimmer of hope, hope for a Ukraine very powerful in the future.”