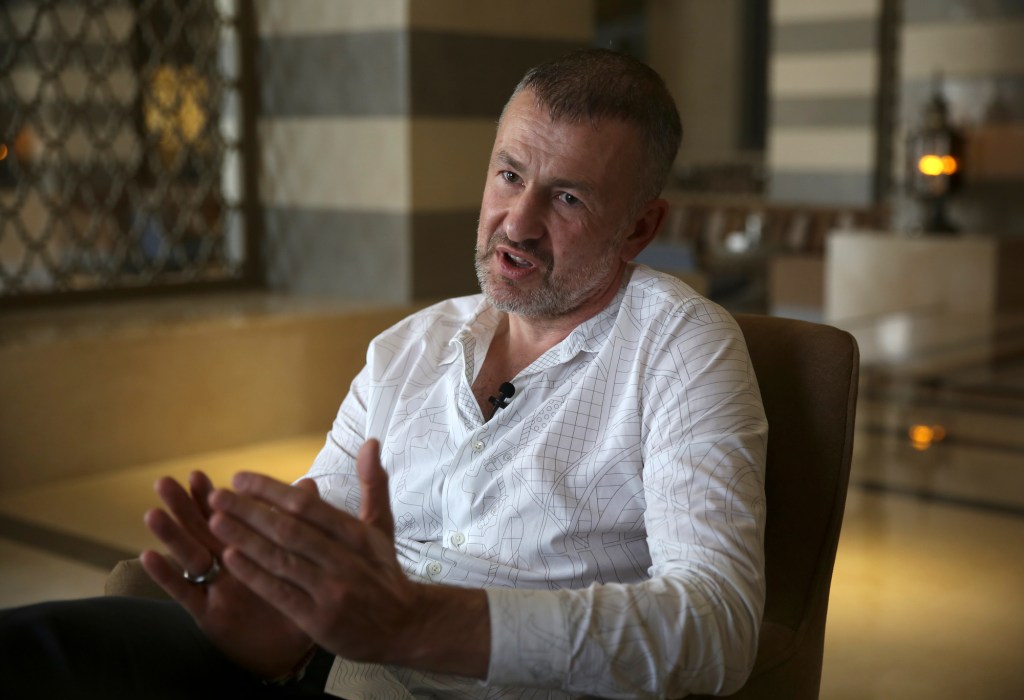 SHARM EL-SHEIKH, Egypt — A Russian billionaire under US and European sanctions over alleged Kremlin ties says he was not surprised by protests against his country at climate talks of the UN this year, but insists that Russia wants to stay engaged on the issue of global warming because it deeply affects the nation.

Andrey Melnichenko, who heads the climate policy panel at Russian business lobby group RSPP, told The Associated Press that ‘regardless of the very terrible time we are all living in now, we will participate, we will observe’ at the meeting. in Sharm el-Sheikh, Egypt.

Pro-Ukrainian activists disrupted the start of an event organized by the Russian delegation during the climate talks on Tuesday before being escorted away by security personnel.

“I wasn’t surprised,” said Melnichenko, who spoke on the panel alongside Russian delegates. “What’s so surprising? That there are people who are deeply concerned about what is happening in Ukraine and who want to make their opinion known?

His comments, while not directly critical of Russia’s invasion of Ukraine, point to a more nuanced view of the bloody conflict than the official Kremlin line, which describes the war as a “special military operation.”

Since late February, war has devastated Ukraine, with bombs and shelling decimating towns and villages and killing thousands.

The war led to the imposition of a series of sanctions against Russian officials and prominent businessmen linked to the Kremlin.

Melnichenko – who now lives in Dubai – criticized Western sanctions against Russia, which he said were applied without considering possible consequences, such as the effect restrictions on fertilizer exports would have on prices global food markets and Russia’s efforts to reduce greenhouse gas emissions. Russia is the world’s largest fertilizer exporter.

“The sanctions were imposed as a hedge for the Russian economy,” said Melnichenko, who once ran fertilizer producer Eurochem and SUEK, one of the world’s largest coal companies. “It affects everything. Take for example the supply of food and fertilizer.

He claimed the sanctions had affected the food supply of “hundreds of millions” of people around the world.

“Of course, this decision affects Russia’s ability to move faster down the path of decarbonizing its economy,” Melnichenko added.

Russian participants in the climate talks in Egypt have particularly focused on efforts to reduce emissions and dependence on fossil fuels, as well as the rules of international carbon markets and carbon offsets – an issue on which the Russia thinks it has great potential because of its huge forests.

Melnichenko said Russia will continue to export fossil fuels to meet demand, and it should be up to markets to decide which are more competitive. Russia is a major exporter of oil and natural gas, although it has faced sanctions from EU trading partners. Other countries, such as India and China, continue to import Russian oil.

Melnichenko, who according to Forbes is worth some $23.5 billion, said the global community should pay more attention to the large share of greenhouse gas emissions that are not caused by human activity, such as respiration, decomposition and even volcanoes. Scientists say that the global warming measured in recent decades is mainly caused by the large-scale burning of fossil fuels since industrialization.

Asked about the role climate change concerns play in Russian civil society, he said environmental issues have become more prominent in major cities over the past six to seven years.
Peaceful protests over the issue were possible, he insisted. “And the government is really responding.”

“That’s one of the areas where you can have freedom of expression,” he said. “And that’s understandable because it’s quite safe in terms of the political environment.”