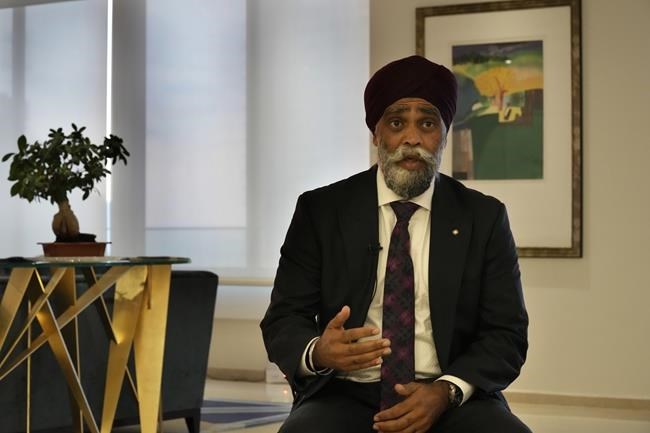 “When you look at the number of missiles that were targeting civilians, it’s hard not to make the connection to the genocide that took place during (the) Holodomor,” Sajjan said Thursday.

The Holodomor was a man-made famine in Soviet Ukraine that killed millions between 1932 and 1933, and Canada recognizes it as genocide.

“They’ve seen atrocities in the past where (Russia) tried to facilitate – to try to starve the Ukrainians. That’s something they knew very well through (the) Holodomor. is something that is not new to them,” he said.

This week, Russian missiles killed civilians and damaged some electrical infrastructure across Ukraine, in bombardments not seen in months across large swaths of the country.

Sajjan said those airstrikes and the torture and killings documented this year constituted war crimes. He said it’s hard not to compare these airstrikes to the Holodomor.

“The type of war crime they’re talking about, the torture that’s been done, some of these stories will come out later – so I will say that will determine what the actual terminology will be.”

Sajjan was speaking to reporters by phone from the Canadian Embassy in Warsaw, Poland, after a visit to Lviv, a major city in one of Ukraine’s safest regions.

He was there to meet with displaced people from across Ukraine, to assess the kinds of support the country might need this winter.

“We look at everything from the supply of generators (to) clothing; the whole range,” he said.

“That’s why this needs assessment is very important, so that we have a good overview of the exact needs across the country.”

Sajjan added that recent airstrikes have added to this need.

“We thought electrical infrastructure could be targeted; we just didn’t think Putin would be so deliberate in his method of doing it.”

Sajjan added that there was a clear need in Ukraine to strengthen support for women victims of violence.

Ukrainian groups have argued that Russia is intentionally perpetuating genocide, citing Moscow’s rhetoric that Ukraine has no distinct culture and does not belong to Russia.

In April, MPs unanimously backed an NDP motion to “recognize that the Russian Federation is committing acts of genocide against the Ukrainian people.” The House of Commons passed this motion with unanimous consent, but did not hold a formal parliamentary vote.

This report from The Canadian Press was first published on October 13, 2022.