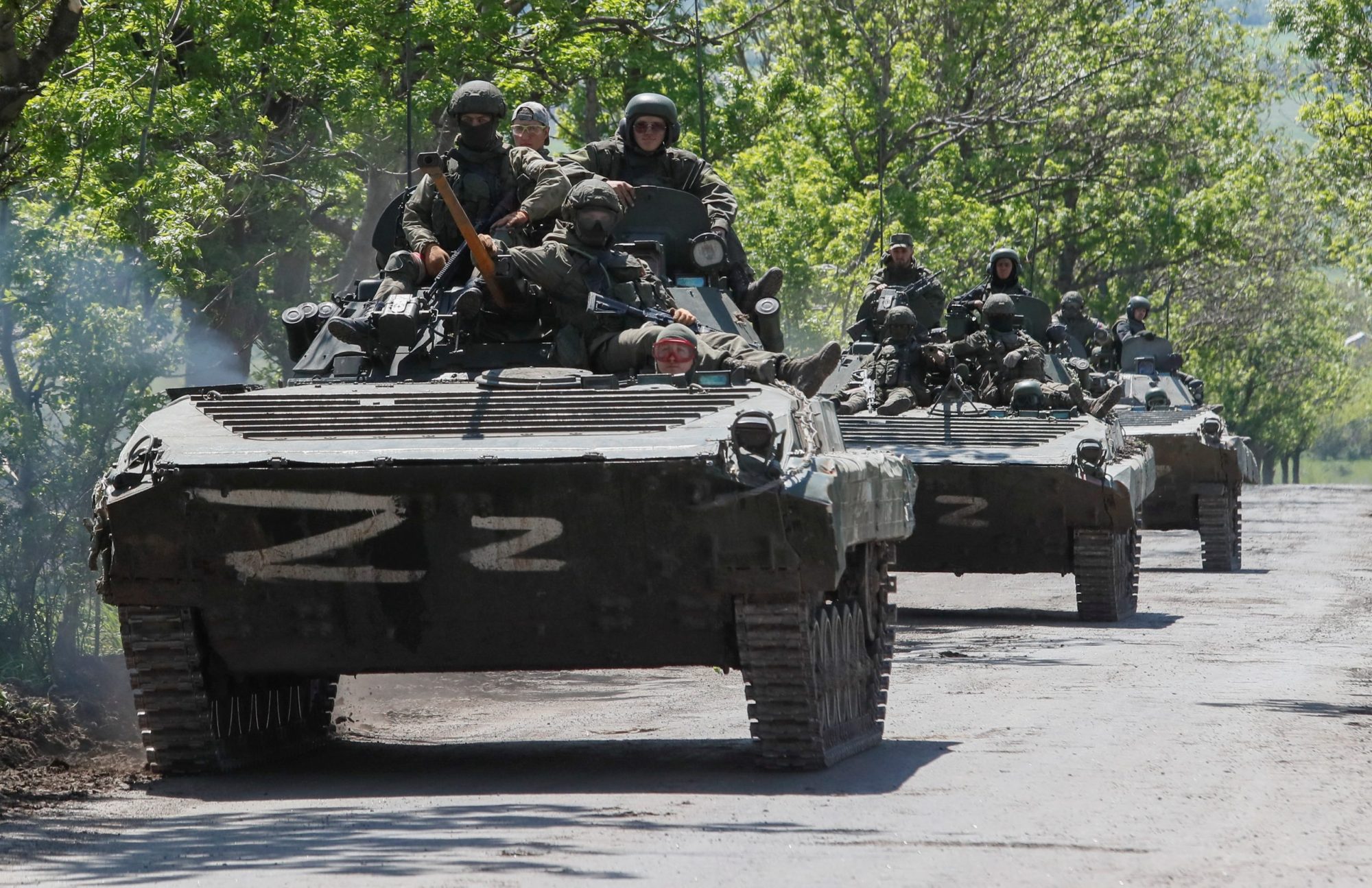 The biggest European battles since World War II are currently raging in eastern Ukraine. However, with international attention firmly focused on the monumental Battle of Donbass, the ultimate outcome of the Russian-Ukrainian war is likely to be decided hundreds of miles to the south.

When the war began on February 24, few envisaged such a long or large-scale campaign. On the contrary, the Kremlin anticipated a quick and comprehensive victory that would bring Ukraine’s Euro-Atlantic integration to a screeching halt and bring the country back into Russian orbit.

Instead, Russia decisively lost the Battle of Kyiv and was forced to withdraw from northern Ukraine entirely. Putin responded to the defeat in the north by regrouping and concentrating his forces in eastern Ukraine, where Russia continues to advance slowly but steadily while paying a high price in military casualties and equipment.

Beaten in the north and struggling in the east, the most significant progress of Russia’s campaign to date has been in the south. Large swaths of southern Ukraine were captured in the early days of the invasion and remain in Russian hands. This allowed Moscow to establish a land bridge linking the occupied Crimean peninsula with Russian proxy entities created by the Kremlin in eastern Ukraine eight years ago. Ukrainian troops managed to prevent further Russian offensives towards the key port city of Odessa, but Kyiv currently lacks military forces and heavy military equipment to liberate areas that have fallen under Russian control.

As Russia seeks to consolidate its hold on occupied areas and Ukrainian forces prepare for an upcoming counteroffensive, the fight for southern Ukraine is far from over. The outcome of this confrontation will likely determine whether Vladimir Putin is able to achieve his goal of extinguishing the Ukrainian state and incorporating large parts of the country into a new Russian empire.

As the Russian crisis in Eastern Europe escalates, UkraineAlert DAILY delivers the best expert advice from the Atlantic Council, the online publication UkraineAlert and beyond, to your inbox Monday through Friday.

It is essential that Ukraine’s international partners understand that the deoccupation of Ukraine’s southern coast is a race against time, with the Kremlin now taking active steps to integrate these territories into the Russian Federation. Ukrainian state symbols are removed from public spaces, the Russian curriculum is introduced in local schools, and the Ukrainian hryvnia currency is replaced by the Russian ruble. Ukrainian media, internet services and mobile phone operators were cut.

The few local collaborators who have been found are installed like Russian puppets. Meanwhile, local elected officials, journalists, community leaders and army veterans are being rounded up and abducted amid growing reports of torture and executions. Tens of thousands of civilians have been forcibly deported. In recent days, Putin unveiled plans to offer Russian passports to residents of Kherson and Zaporizhzhya regions in southern Ukraine. Meanwhile, senior Kremlin officials have said Russia is here “forever.”

The battle for southern Ukraine will likely hinge on controlling the Kherson region, located directly north of Crimea. It is no exaggeration to say that Ukraine’s future as a viable independent state may depend on regaining control of this region. For Moscow, the stakes are just as high. The occupation of Kherson allows Russia to supply fresh water to occupied Crimea and is essential for Putin’s land bridge linking the peninsula to the Russian border via Berdyansk and Mariupol in southeastern Ukraine.

The Kherson region is also a springboard for further anticipated Russian advances along the Black Sea coast towards Odessa. This would allow the Kremlin to cut Ukraine off from the sea and thwart plans to break the current Russian naval blockade of Ukrainian Black Sea ports. Russian domination of Ukraine’s southeast coast, which stretches from Crimea to the Russian border, has already allowed Moscow to turn the Sea of ​​Azov into a Russian lake. Completely blocking Ukraine’s access to the Black Sea would deal a fatal blow to Ukraine’s export-heavy economy and leave the country no choice but to agree to peace on Moscow’s terms.

Besides its strategic importance, southern Ukraine also has great symbolic value for Russia. Since the capture of Crimea and the outbreak of hostilities with Ukraine in the spring of 2014, Kremlin officials and Russian nationalists have resurrected the half-forgotten tsarist term “Novorossiya” (“New Russia”) to describe parts of the eastern and southern Ukraine they are looking for. annex. Putin has repeatedly accused early Bolshevik leaders of wrongly granting Soviet Ukraine these southern regions while claiming that the entire region is in fact “former Russian land”.

The upcoming battles in southern Ukraine are likely to be the biggest and bloodiest of the war. Ukraine will face Russian troops in well-prepared defensive positions that also benefit from the logistical advantages of air support and resupply from neighboring Russian-occupied Crimea.

To succeed, the Ukrainian military will need to find some sort of respite in eastern Ukraine that will allow it to concentrate in the south. Another crucial factor will be the timely delivery of heavy weapons by Ukraine’s international partners, including long-range artillery, attack drones and multiple launch rocket systems (MLRS). Western intelligence will also be vital as Ukraine seeks to repeat the successes it achieved in the first month of the war. Behind the front lines, Ukrainian partisans and special forces units will have an important role to play in disrupting Russian military movements, destroying vital infrastructure and suppressing collaborators.

Hurry up. While it would be foolish to rush into an offensive as crucial to the wider war effort as the liberation of southern Ukraine, it would also be dangerous to wait too long. Russia is clearly in a rush to annex the region. Many observers expect Moscow to push for annexation in the coming months, possible with parallel efforts in the Donbass region of eastern Ukraine. This will likely be accompanied by further human rights abuses as the Kremlin seeks to secure its position and silence any local opposition.

Unless Russia is forced to withdraw from southern Ukraine, all efforts to broker a negotiated peace will prove futile and will only lead to a pause before the next round of hostilities. The region is simply too important and cannot be left under Kremlin control. It holds the key to Putin’s dreams of a new Russian empire and at the same time is essential for Ukraine’s continued existence as an independent state.

If Ukrainian forces succeed in ending the Russian occupation of the south, they will save their own country while dealing a potentially fatal blow to Moscow’s expansionist agenda. It would have been long overdue. More than three decades after the collapse of the USSR, Putin’s Russia remains an unabashed imperialist power. The time has come to cast those imperial ambitions on the ash heap of history.

Taras Kuzio is a researcher at the Henry Jackson Society and professor of political science at the Kyiv Mohyla National Academy. He is the author of the recently published book “Russian Nationalism and the Russian-Ukrainian War”.

The opinions expressed in UkraineAlert are solely those of the authors and do not necessarily reflect the opinions of the Atlantic Council, its staff or its supporters.

The Eurasia Center mission is to strengthen transatlantic cooperation in promoting stability, democratic values ​​and prosperity in Eurasia, from Eastern Europe and Turkey in the West to the Caucasus, Russia and the Central Asia to the East.

Follow us on social networks
and support our work

Image: A convoy of Russian armored vehicles drives along a road in southern Ukraine. May 2022. (REUTERS/Alexander Ermoshenko)