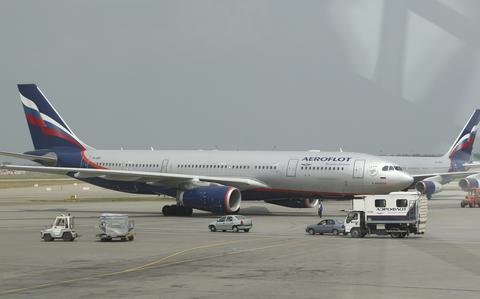 The Airbus A330 used for an Aeroflot international flight is prepared at Sheremetyevo airport in Moscow, June 27, 2013. (Sergei Grits/AP)

ATLANTA (Tribune News Service) – Flights from Atlanta to Seoul are already some of the longest operated from Hartsfield-Jackson International Airport.

The flight takes over 14 hours, depending on weather and other factors. But the fallout from the Russian invasion of Ukraine thousands of miles away has wiped off the map the shortest preferred route available to connect the two former Olympic cities, which enjoy strong economic and social ties.

Before the war, flights between Atlanta and the South Korean capital often crossed Russia, Canada and Alaska on a “great circle” route to the north, which was shorter due to the curvature of the Earth. But Russian airspace is now off limits amid simmering geopolitical tensions.

This means that an Atlanta-Seoul flight that already takes most of the day can now take even longer.

Jae Kim, president of the US Southeast Korea Chamber of Commerce, said Korean visitors had recently arrived in Atlanta and hadn’t noticed a big impact. A little extra time on such a long flight is not a big inconvenience because some people still sleep during the trip, he noted.

“We just hope it doesn’t add any problems,” he said.

Flights between Hartsfield-Jackson and Seoul Incheon International Airport operated by Delta Air Lines and Korean Air now ply a path to Asia just outside Russian airspace before heading to Korea, according to FlightAware.com. This can vary, but in some cases changed routes can result in flights over 15 hours, the flight tracking service says.

Kim flies to Korea twice a year with another trip scheduled for next month.

“Maybe it will be a little different in May when I fly,” he said.

The closure of Russian airspace is an additional complication for airlines already struggling with the uneven return to business and leisure travel from the pandemic. More than a month into the war, airspace restrictions continue to cause headaches for route planners.

Atlanta-based Delta launched its Atlanta-Seoul route in 2017. It temporarily suspended the route at the start of the pandemic before resuming service with a limited schedule in July 2020.

In a statement, Delta acknowledged that it “avoided Russian Far Eastern airspace in our limited transpacific flights,” but the airline declined to discuss travel times.

Some Asian routes, including Atlanta-Shanghai, are still suspended due to pandemic restrictions.

The extra flight time between Atlanta and Seoul is probably more of a nuisance than a deal-breaker, as long as the nonstop route continues on a nearly regular schedule.

For people from Korean businesses and organizations, “those direct flights to Atlanta [from Seoul] are very important,” Kim said.

Georgia is home to dozens of facilities run by Korean-affiliated companies, including Kia Motors’ only U.S. assembly plant and a sprawling battery factory owned by a subsidiary of Korean conglomerate SK Innovation.

Some of the biggest impacts of the closure of Russian airspace are on a number of flights from Europe to Asia that have had to add hours to their flight times. Many more have been cancelled.

The closure of Russian airspace also affects cargo flights, such as the scheduled service between Atlanta and Seoul operated by Asiana Airlines.

But the Russian restrictions have been much more troublesome for some cargo flights between Europe and Asia, which have had to reduce loads because re-routing requires more fuel. This leads to tighter weight restrictions for cargo, Aviation Week editor Jens Flottau said in a recent webinar.

“What happened was people just left cargo on the ground, reduced the cargo load and tried to fly the existing routes with less cargo,” Flottau said.

Flight cancellations have also increased pressure on the supply chain and rising fuel prices have pushed up costs.

To visit The Atlanta Journal-Constitution.