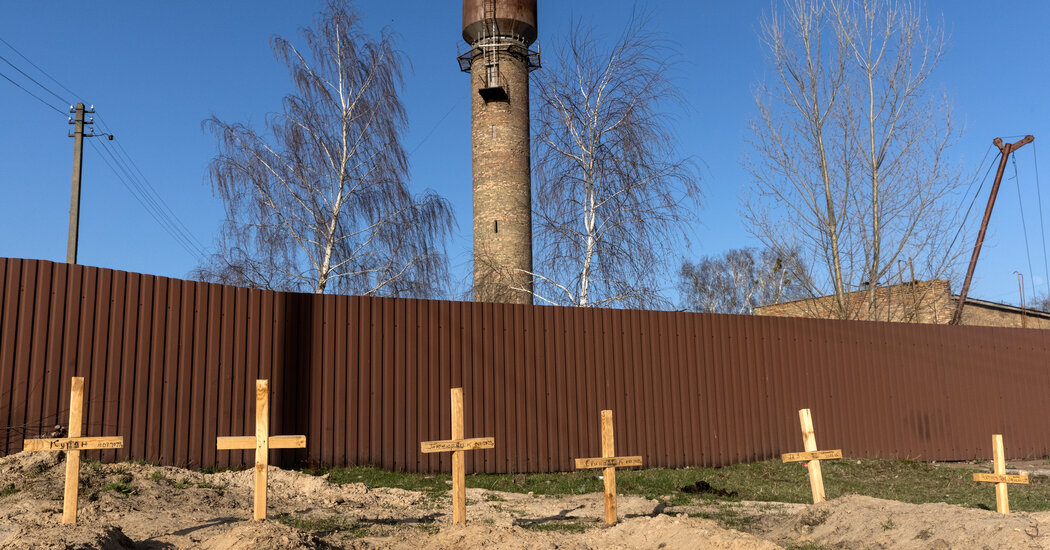 Good evening. This is your Russia-Ukraine war briefing, an overnight guide to the latest news and analysis on the conflict.

In areas of Ukraine recently liberated from Russian occupation, disturbing stories have emerged of the terror and death Russian soldiers inflicted on Ukrainian civilians under their control.

Every day, Ukrainian investigators discover new bodies of villagers who have been shot in the head or bear signs of torture. Tales surface of civilians dying from lack of food, water or heating.

Russian troops inflicted much of that misery in small towns near the capital kyiv, which they captured early in the war before Ukrainian forces drove them out two weeks ago.

Our correspondent Jeffrey Gettleman and journalist Oleksandr Chubko reported from Borodianka, north of Kyiv, of a nightmarish ordeal at a Ukrainian mental health facility.

A squad of Chechen soldiers burst through the gate on March 5 and ordered all 500 patients and staff from the special care home to a courtyard at gunpoint. “We thought we were going to be executed,” said Maryna Hanitska, the hostel’s director.

The soldiers pulled out a camera and told the director to make everyone smile. They then told him to look at the camera and thank Vladimir Putin. She managed to say, “Thank you for not killing us.”

The siege lasted for weeks, during which the building lost heat, water and electricity, and more than a dozen patients died.

In Makariv, another small town near kyiv, authorities said they recently discovered 20 corpses in yards and homes, many of which bore marks of torture. In the Brovary neighborhood further east, police found six bodies in a cellar, all men who had apparently been executed.

The bodies of at least 900 civilians killed by Russian forces during the withdrawal of troops from the Kyiv region have been discovered, a senior Ukrainian police official said today.

Zelensky in his own words

President Volodymyr Zelensky has given several interviews this week that provide insight into his state of mind as Ukraine prepares for what is expected to be a long and bloody battle with Russia in the east. Here are the highlights:

No time to be optimistic: If Russian troops are not expelled from Ukraine’s eastern provinces, Zelensky told The Atlantic, “they can return to central Ukraine and even kyiv.” It’s possible. It is not yet the moment of victory. He added: “We have a very small window of opportunity.”

Demand arms from world leaders: “I come to say that I need this particular weapon. You have it and here it is; we know where it is stored. Can you give it to us? We can even fly our own cargo planes and recover them; we We can even send three planes a day. We need armored vehicles, for example. And not one a day. We need 200 to 300 a day. These are not personal taxis, just for me; our soldiers need transport.

On Russian leadership: Russians need leaders they choose and trust, “leaders who can then come in and say, ‘Yeah, we did it.’ That’s how it worked in Germany.

Putin’s nuclear threat: Zelensky told CNN that “everyone, every country, should be worried” about the possibility that Putin might use a nuclear weapon.

On Europe’s dependence on Russian energy: European countries that continue to buy Russian oil “make their money from other people’s blood”, Zelensky told the BBC.

Thanks for reading. I will be back on Monday. —Carol

Sign up here to receive the briefing by email.

What did you like? What do you want to see here? Email your thoughts to [email protected]