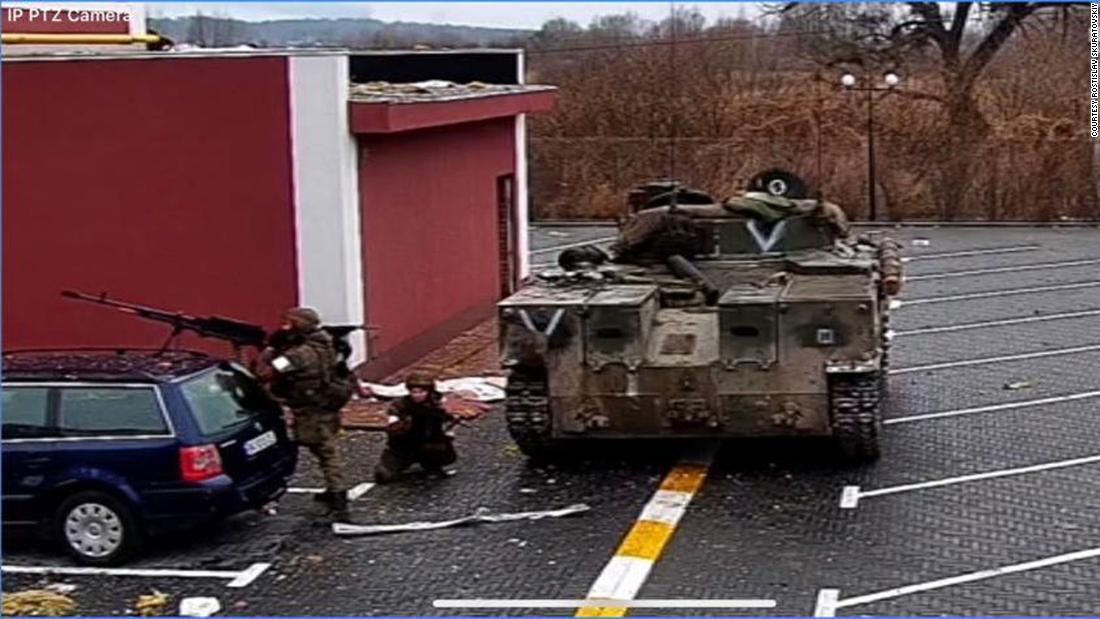 “I am here with you. We must resist,” he said in a video message. “Weapons are coming. Our soldiers are coming. We’ll get through this. We just have to keep calm and protect the people around us. Thank you!”

A few days later, Prylypko was dead. He and another civilian, Ivan Zorya, were killed by Russian soldiers, according to eyewitnesses, as they attempted to deliver medicine and other supplies to residents of the community. Another civilian, Oleksandr Karpenko, was killed while trying to save them.

Russia has always denied targeting civilians during its invasion of Ukraine.

But photos of the scene taken after the fact and footage captured by security cameras the day of the attack clearly show the mayor was traveling in a civilian car when Russian troops opened fire. There were no other cars or military vehicles nearby at the time, according to eyewitnesses.

CNN requested an official comment from the Russian Ministry of Defense on the Hostomel killings, but did not receive a response.

As part of an investigation into the deaths of the three men, CNN spoke to three eyewitnesses to the March 3 attack and several other local residents who saw the bodies of Prylypko and Zorya lying in the street in the days after the shooting.

Hostomel is about 25 kilometers northwest of Kyiv, on one of the main roads leading to the Ukrainian capital. It was the site of some of the worst fighting in the early days of the conflict. The cargo airport of the same name — just north of downtown Hostomel — was targeted by Russian troops from the first day of the war.
Hostomel – like Irpin, Bucha, Vorzel and other towns, villages and suburbs north of Kyiv – came under Russian control soon after the invasion began. When Ukraine regained control of the region in late March, these names became synonymous with the atrocities committed by Russian troops during the occupation.
Among these atrocities: The widespread and apparently deliberate killing of civilians. The deaths of Prylypko, Zorya and Karpenko fit this pattern, according to witness and survivor accounts.
When Hostomel was attacked, Prylypko organized a team of a dozen volunteers to deliver food, medicine and other supplies to people hiding in shelters around town, according to Prylypko’s family and several of the volunteers involved in the operation.

On March 3, the eighth day of the invasion, Prylypko and three other volunteers set off in a white Renault Duster SUV from his home in the west of the city.

Taras Kuzmak, the head of the municipal utility company of Hostomel, was driving the car. He told CNN the mayor sat next to him in the front seat as the group headed east. He added that none of the men in the vehicle were armed or wearing body armor.

Yuri Shturma, another of the volunteers who was with Prylypko inside the car, said the mayor was trying to arrange the delivery of generators for Hostomel, because at that time – in the depths of winter Ukrainian – the city had been cut off. cut off from electricity, water and heating for days.

Prylypko thought a humanitarian convoy was due to arrive in Hostomel from the south that day, according to Shturma.

As the car passed the municipal lake and approached the main road through Hostomel, the volunteers spotted a column of Russian tanks to the east, Shturma and Kuzmak told CNN.

At that time, the southern part of Hostomel, about three kilometers away, was still under Ukrainian control. But the north of the city had been taken over by Russian troops, who were closing in on the city center.

According to a report by the Intelligence Directorate of the Ukrainian Defense Ministry, Russian and Ukrainian troops were fighting for control of Hostelel near the town’s glass factory – less than a mile from the volunteers’ car – at the time.

“And that’s where we first came under fire,” Kuzmak said.

The volunteers attempted to flee by speeding up and turning south, but it was too late. Zorya, who was sitting in the back seat of the car, had been shot in the head. He collapsed on Shturma, who was sitting next to him, bleeding profusely.

“The wound was just in his head. You can imagine when they shoot his head with a heavy machine gun,” Kuzmak said.

Shturma said the men saw an armored vehicle with the letter ‘V’ – one of the signs known to be used by the Russian military alongside the more notorious ‘Z’ – written on the side as they attempted to escape.

When he realized the extent of Zorya’s injuries, Prylypko ordered the car to drive to a medical clinic in a nearby residential compound, Kuzmak told CNN.

But what the group in the car didn’t know was that the compound had already been taken over by the Russians.

Footage taken by security cameras inside the Pokrovsky complex and shared with CNN shows a number of Russian soldiers huddled in the yard and pointing heavy weapons at something out of frame. It is not known what their target was at the time, but the image clearly shows that the Russians were active in the area that day.

“The Russians were already there,” Kuzmak told CNN. “There were about seven armored vehicles in the yard, tanks, infantry fighting vehicles. It was heavy equipment.”

Kuzmak and Shturma said that’s when their car was attacked again.

That’s when Prylypko was hit, as he was trying to get to cover, Kuzmak and Shturma told CNN.

The pair said they took cover behind an excavator that had been abandoned after a local construction company tried to demolish a bridge over a stream to slow the Russian advance.

At one point, Kuzmak called for help, reaching out to David Sheremet, another Hostomel resident who lived nearby.

“He called me and said the mayor was hurt,” Sheremet told CNN. “Everyone was connected and supporting each other. I took the guys and we left. When we approached the mayor was still alive, but he had been shot…I wanted to pull him out of the line shooting and I realized that they were shooting at us from different directions.”

Sheremet said Oleksandr Karpenko, one of two other volunteers who arrived with Sheremet, was shot while trying to help the mayor.

“I saw Oleksandr fall. And as he falls, he is hit by a bullet that comes out of his stomach. We ran for cover and he shouted: ‘Don’t leave me!'”, Shermet said.

Sheremet said the group eventually managed to reach Karpenko; they took him home, but he died of his injuries the next morning. “We gave him all the help we could, but there was no way to call an ambulance and there was no chance of leaving,” Sheremet said.

After Sheremet, Kuzmak and Shturma fled with Karpenko, the lifeless bodies of Prylypko and Zorya were left on the street for several days – until local priest Petro Pavlenko found the courage to ask Russian troops to let him take the bodies away to bury them, Pavlenko told CNN.

Pavlenko told CNN that Russian soldiers allowed him to transport Prylypko’s body using a wheelbarrow, but forbade him from picking up Zorya. Pavlenko was only able to do so two days later, when there were no more Russian soldiers patrolling the area.

“A few days later we decided to bury them in the cemetery,” Pavlenko said. It was a rushed funeral, with no coffins, guests or ceremony, he said.

After Hostelel was liberated from the Russians in late March, Prylypko’s body was exhumed on April 12 and examined by war crimes prosecutors.

On April 14, his family was finally able to put the mayor to rest. His grave is now marked with an ornate metal cross and an oval black and white portrait.

In the photo, he is seen deep in thought, his reading glasses perched on his forehead. Below is an image of the Ukrainian Order of Courage, which was awarded to him posthumously by Ukrainian President Volodymyr Zelensky, in recognition of his “courage and selfless actions”.

Sanyo Fylyppov reported from Lviv and Ivana Kottasová reported and wrote from London.