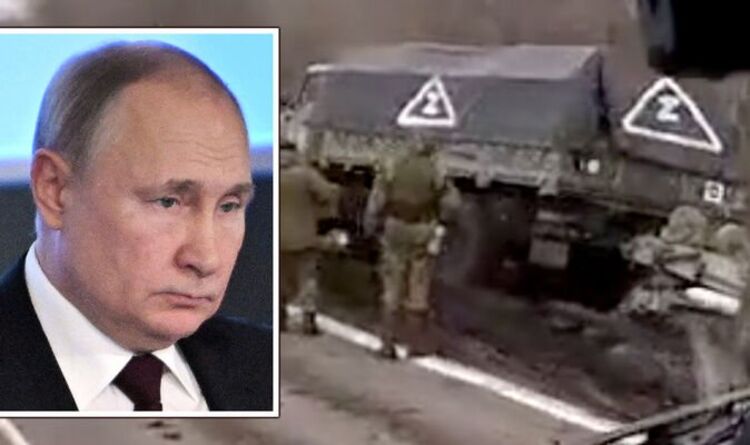 The white letter surrounded by a square box appeared on tanks and armored trucks, which allegedly drove towards Ukraine. This comes amid growing fears that Russia has already begun its invasion of Ukraine.

Russia has said it will be a “peacekeeping” mission, but it is believed to be a potential pretext to place troops on Ukrainian territory.

Western leaders reacted on Tuesday by preparing sanctions against Russia.

Since then, videos have been posted online claiming to show Russian military vehicles heading towards Ukraine.

Experts have suggested that the symbols could simply show that the vehicles are prepared for combat, but other darker theories have emerged.

A military source in Kiev told The Sun: “This would suggest that final preparations are complete.

“It is vital that any attacking force can be distinguished, especially from the air where Russian forces will have full control.

“The Ukrainians have very similar tanks and vehicles and will want to reduce the risk of friendly fire.”

Aric Toler, an investigative reporter for Bellingcat, reportedly said the organization “has been monitoring this stuff non-stop for eight years”.

He said the investigative group “have no idea what they are and have never seen it before”.

According to the Sun, he agreed the symbol suggested an invasion was imminent and warned to “assume the worst”.

Meanwhile, Rob Lee, a PhD student who focuses on Russian defense policy, said the markings were a “strong indication that Rosgvardia troops would participate in any invasion”.

The Rosgvardia – or National Guard of the Russian Federation – is the country’s internal military force.

Mr Lee pointed to a popular Russian Telegram channel which claimed that certain Z-marked vehicles would be used in a particular direction during an invasion of Ukraine.

At the same time, those marked with a triangle instead of a box would travel in a different direction, but he noted that this theory “is obviously not confirmed”.

He added: “Most of the ‘Z’ marks seen so far were inside a square, but this Ural truck with an Msta-B howitzer has one inside a triangle.

Mr. Lee explained that “when different units use the same routes, ground guides need to be able to identify them to show them the direction to follow. Otherwise, the units can get mixed up.

He added that others have suggested it meant “the point of no return”.

The Z symbol is not part of the Russian Cyrillic alphabet, as the language uses a different character for the letter, which further adds to the mystery.