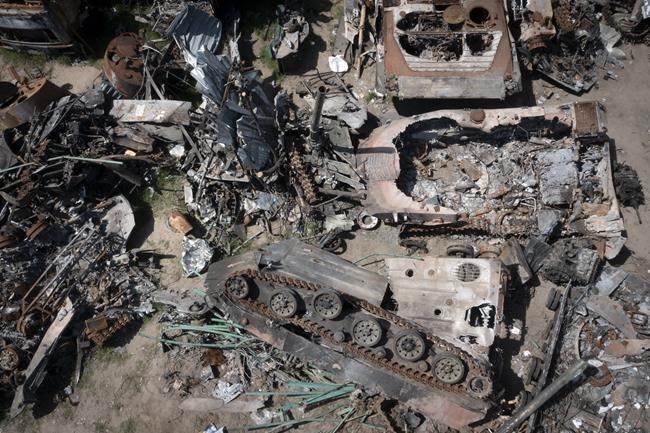 ZAPORIZHZHIA, Ukraine (AP) — Ukraine on Wednesday halted the flow of Russian natural gas through a hub that supplies European homes and industry, while a pro-Kremlin official in a southern region seized by Russian troops said he would ask Moscow to annex it.

The remarks could be another sign of Russia’s broader plan for Ukraine as it tries to salvage an invasion that has so far gone awry – amid fears the country could remain a source of instability continental and global for months, if not years, to come.

After his forces failed to quickly overrun the capital, President Vladimir Putin focused on the country’s eastern heartland, Donbass. But one of its commanders has hinted that Moscow’s plans are broader, saying it also hopes to take control of the country’s south and cut it off from the coast.

Kherson borders Crimea, which Russia annexed in 2014, and its capture was one of Russia’s most significant successes in the war.

In 11 weeks, the war has been fought on the battlefields of Ukrainian cities, but also on the energy and financial markets, as Ukraine’s allies in the West have sought to deprive Russia of the money needed to finance the war with sanctions and energy embargoes.

The immediate practical impact of Wednesday’s gas cut should be limited because much of the gas can be moved through another pipeline, said gas analyst Zongqiang Luo of Rystad Energy.

Preliminary flow data suggested this was already happening, although Russian giant Gazprom indicated a drop in supply. It said it was sending gas to Europe via Ukraine amounting to 72 million cubic meters, apparently down 25% from the previous day.

The move highlights the wider risk to gas supplies during the war and is of symbolic importance as it is the first time that Ukraine has disrupted the westward flow.

“Yesterday’s decision is a small preview of what could happen if gas facilities are hit by live fire and face the risk of extended downtime,” Luo said.

He added that the shutdown would also make it harder for European countries to fill underground storage for next winter and “accelerate Europe’s plans to move away from Russian gas imports”.

The European Union has sought to reduce its dependence on Russian energy, phasing out its use of coal and considering doing the same for oil. Gas poses a more complicated problem, given both European consumption and the technical difficulties of obtaining supplies elsewhere.

It was unclear whether Russia would take an immediate hit, as it has long-term contracts and other means of transporting gas.

On the battlefield, Ukrainian officials said a Russian rocket attack targeted an area around Zaporizhzhia, destroying unspecified infrastructure. There were no immediate reports of casualties. The southeastern city has been a refuge for many civilians who fled a Russian siege in the devastated port city of Mariupol.

The Azov regiment said on social media on Wednesday that Russian forces had carried out 38 airstrikes in the past 24 hours “on the territory” of the Azovstal steel plant.

The vast steelworks, with its network of underground tunnels and bunkers, housed hundreds of Ukrainian soldiers and civilians during a month-long siege. Dozens of civilians have been evacuated in recent days, but Ukrainian officials said on Tuesday that up to 100 civilians could still be trapped there.

The wives of two Ukrainian soldiers defending the mill met with Pope Francis on Wednesday and asked him to step in to help organize the evacuation of troops. One of them, Yuliia Fedusiuk, said the troops were running out of water and had no food. She said she understood that some civilians, who are relatives of the soldiers, remained in the mill.

Meanwhile, President Volodymyr Zelenskyy suggested in his overnight address that the military was gradually moving Russian troops away from Kharkiv – the country’s second-largest city and a key to the Russian offensive in Donbass.

He said his troops had driven Russian forces out of four villages near the town.

As his forces appear to be gaining momentum in a budding counteroffensive, Foreign Minister Dmytro Kuleba on Tuesday expressed what appeared to be growing confidence – and expanded goals. He suggested to the Financial Times newspaper that Ukraine could go beyond simply forcing Russia back into areas it held before the invasion began 11 weeks ago.

Kuleba’s statement seemed to reflect political ambitions more than battlefield realities: Russian forces have advanced into the Donbass and control more of it than they did before the war began. But it shows how Ukraine thwarted a larger and better armed Russian army, surprising many who had anticipated a much quicker end to the conflict.

Meanwhile, Britain’s Ministry of Defense said Ukraine was targeting Russian forces on Snake Island in the northwest Black Sea in a bid to disrupt Moscow’s attempts to expand its influence.

Russia sought to reinforce its garrison on Snake Island, while “Ukraine managed to strike Russian air defenses and resupply ships with Bayraktar drones,” the ministry said on Twitter. He said Russian supply ships had minimal protection after the Russian Navy withdrew to Crimea after losing the flagship of its Black Sea Fleet.

Satellite photos analyzed by The Associated Press show fighting there.

But the statement warned: “If Russia consolidates its position on (Snake) Island with strategic air defense and coastal defense cruise missiles, it could dominate the northwest Black Sea.”

The Ukrainian pipeline operator said it would halt Russian shipments through a hub in a part of eastern Ukraine controlled by Moscow-backed separatists due to interference by ‘occupying forces’ , including the apparent siphoning of gas. He also complained of interference along the route last month.

Benchmark European gas futures tipped on Tuesday and Wednesday on the news, meaning consumers could face higher energy bills – at a time when prices are already rising.

Higher prices would benefit Russia, although it now has huge foreign exchange reserves thanks to rapidly rising crude oil prices in recent months as global travel and business resumed following massive lockdowns from the coronavirus pandemic.

The hub in question handles about a third of Russian gas transiting through Ukraine to Western Europe. Russian natural gas giant Gazprom put the figure at around a quarter.

The move came as Western powers sought to increase economic pressure on Moscow and bolster Ukraine’s defenders. The US House of Representatives on Tuesday approved a $40 billion aid package for Ukraine.

US and NATO officials have expressed concern that Russia could dig into a protracted conflict as the war enters its third month with few signs of a decisive military victory for either side and no resolution in sight. .

The Atlantic alliance is also waiting to see if Sweden and Finland, Russia’s two key Baltic Sea neighbors, announce their intention to join NATO – which could be a blow for Russia.