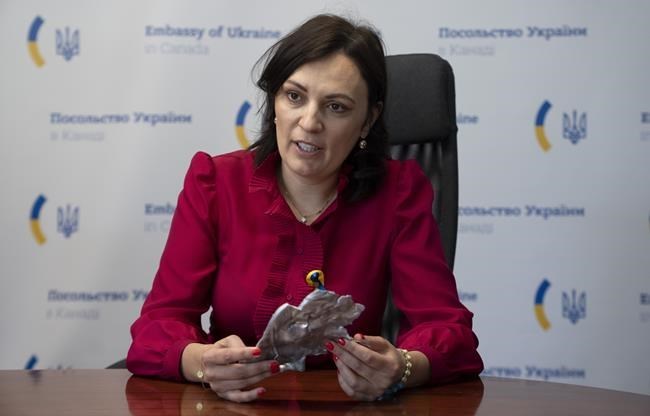 OTTAWA — Ukraine’s ambassador to Canada said her country is investigating more than 28,000 alleged war crimes, including the murder of 373 children by Russian forces.

Ambassador Yulia Kovaliv says the crimes documented and investigated, with the help of Canadian investigators, include the kidnapping of children taken to Russia and the murder of fleeing civilians.

“What we want to do is to properly document every crime and we will bring Russia to justice,” she said in an interview, during which she was called by the Prosecutor General of Ukraine to this topic.

Among the war crimes under investigation is the discovery of 458 bodies, including 12 children, in Bucha, a suburb of Kyiv occupied for 33 days by the Russians.

Efforts are also being made to bring kidnapped Ukrainian children back from Russia.

In an interview on the eve of Ukraine’s Independence Day on Wednesday, she said Vladimir Putin’s invasion of Ukraine was not just a military assault, but an effort to erase cultural heritage from the country.

Since invading Ukraine six months ago, Russia has launched a systematic campaign to destroy all things Ukrainian by burning books, bombing museums and churches and making people in the areas speak Russian. occupied, including schoolchildren, Kovaliv said.

“Russia is now trying to purge Ukrainians in the occupied territories and issue them Russian passports,” she said. “The Ukrainians refuse to do this, even under threat.”

She also accused Russia of engaging in “energy terrorism”, bombing 90% of wind farms and solar energy installations in Ukraine.

Despite this, Ukraine is trying to increase the electricity supply to neighboring European countries.

However, she said the situation at a Russian-occupied nuclear power plant – the largest in Europe – is serious, with Ukrainians working “to prevent a catastrophe” in the presence of armed Russian soldiers.

“There is military equipment in the nuclear power plant…it’s a huge risk.”

International inspectors must be immediately allowed to enter the Zaporizhzhia nuclear power plant, she said, to ensure its safety.

Prior to coming to Ottawa, the Ambassador held several senior positions in Ukraine, including Deputy Chief of Office to President Volodymyr Zelenskyy, focusing on the economy and international financial organizations.

“When the war broke out, I was working on the board of the biggest state-owned oil and gas company,” she said.

Yet Ottawa is its first diplomatic post, and an important one, as Canada is one of Ukraine’s staunchest allies and one of its most generous donors.

In addition to more military equipment, she asked Canada for warm clothes and winter camouflage for Ukrainian troops so they could fight in the snow.

The walls of the embassy are littered with photographs of the destruction in Ukraine, including those of injured civilians and mothers in hospital beds.

Another grim reminder of the conflict is a large shrapnel from a Russian missile that hit a military training base 20 kilometers from the Polish border in March, killing 43 soldiers.

A few weeks earlier, Canadian personnel were at the base training Ukrainian troops.

The ambassador grabbed the piece of Russian rocketry just as she was due to leave for Canada in April. It will be auctioned Wednesday in Toronto on Ukraine’s Independence Day to help raise funds for ambulances and rehabilitation centers.

Since arriving in Canada, says the Ambassador, she has been encouraged not only by the generosity and unwavering support of the Canadian government, but by “how much yellow and blue (there is) all over Canada — this is not just in Ottawa, it’s everywhere.”

She takes cellphone photos of yellow and blue signs and flags, including outside stores and bakeries, and sends them to friends in Ukraine on the front lines, to show how people across Canada are doing show of solidarity.

“It’s very important for … people who are there every day under the bombardments to know that the world is with us,” Kovaliv said.

The Ambassador is deeply grateful to Canada for its financial and moral support, and said a move allowing Canada to sell Russian assets seized under the sanctions regime sets an important international precedent.

Yet she would like Canada to go even further and ban Putin from attending the G20 – including an upcoming heads of government meeting in Bali in November – as well as ban Russians from having visas to leave the country. country.

The ambassador believes that Putin and his military apparatus are not the only ones who should be held responsible for the invasion of Ukraine.

She criticizes both Russians fighting in Ukraine, who she says are looting people’s homes and committing atrocities, but also Russian civilians who keep “silent” about the war.

Russians enjoy Western lifestyles and buy luxury goods abroad, she said, while educating their children in London and vacationing in France.

She urged the Russian people to have the courage to speak out against the war.

Russia has launched a deliberate campaign to destroy Ukraine’s infrastructure and disrupt the harvest, including by bombing silos and planting landmines in fields, she said.

However, the high quality protective equipment provided by Canada has saved lives, including that of a young demining officer who was thrown through the air after a mine exploded recently.

She blamed Russia not only for driving up the price of grain, by blockading ports, but for preventing the export of grain to famine-threatened African and Middle Eastern countries.

A note of optimism is the fact that 25 ships carrying 630,000 tonnes of Ukrainian grain and corn have left Black Sea ports since an international agreement was signed with Russia to allow the shipment of grain this summer.

Despite this, there is still a lot of work to be done to bring in the harvest and prepare for the harsh Ukrainian winter. Many homes lack electricity or even windows, she said.

“We need to prepare schools and provide protection in basements where children can take shelter safely where there is a risk of airstrikes and bombings – this is the new reality.”

This report from The Canadian Press was first published on August 23, 2022.