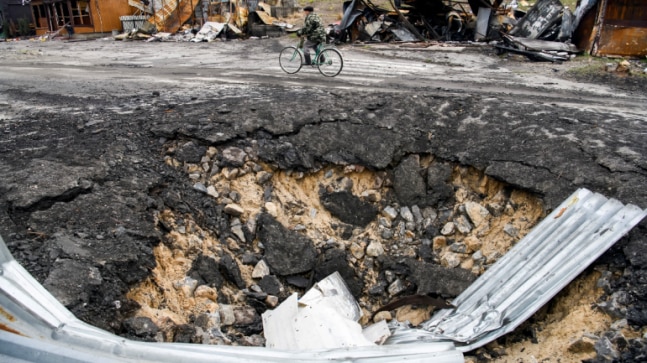 A resident cycles past a bomb crater, as the Russian attack on Ukraine continues, in the village of Demydiv outside kyiv, Ukraine, April 6. (Reuters)

As the Russian invasion of Ukraine continues even after two months, Ukrainian citizens have taken it upon themselves to stem Vladimir Putin’s army in every way possible, sometimes taking extreme measures.

While Ukrainian citizens were first seen taking up arms and even standing up against Russian tanks to halt their advance, they then took the extreme step of intentionally flooding villages leading to the capital, kyiv, for a ” tactical victory”.

According to a New York Times report, the relocation of residents of Demydiv, a village north of kyiv, thwarted a Russian tank assault and bought valuable time for the Ukrainian army to prepare its defenses.

The villagers apparently channeled water from the Dnipro River to the east and flooded the area, causing significant damage to the settlement. However, they proudly stated that the strategic advantages of the move far outweighed their difficulties.

“Everyone understands and no one regrets it for a moment,” said Antonina Kostuchenko, a retiree whose living room is now filled with water. “We saved kyiv,” said another resident.

The flooding of the village was very effective as it created a large shallow lake in front of the Russian armored columns.

The flood was crucial to Ukraine’s fight against Russia in March, as its army repelled Russian attempts to encircle kyiv and eventually forced the Russians into retreat. The shallow lake created an effective barrier for tanks and facilitated ambushes in the outlying towns of Hostomel, Bucha and Irpin.

Demydiv is not the only place that took self-destruct measures to stop the Russian onslaught. Ukraine has already destroyed infrastructure, such as bridges, to stop the advance of Russian forces.

READ ALSO | After a rocket: “One second and you have nothing left”