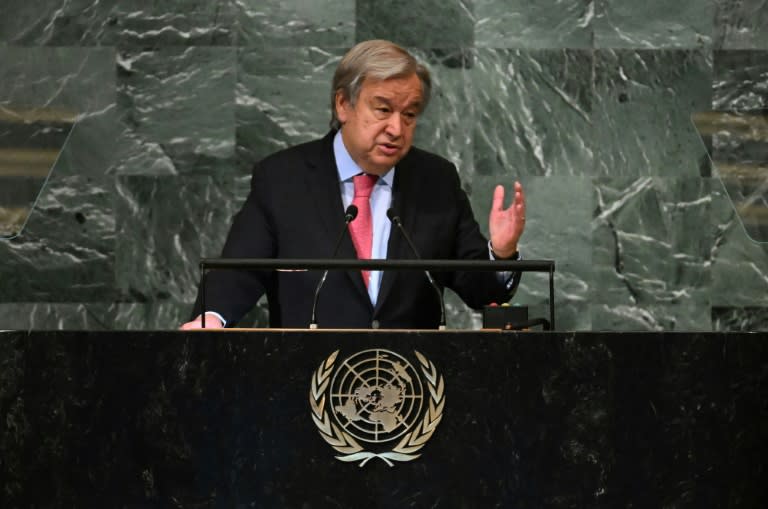 The decision to take the issue to the General Assembly, where the 193 UN members have one vote each – and no one has a veto – was taken after Russia used its veto during a a Security Council meeting on September 30 to block a similar proposal.

“It’s extremely important,” said Olof Skoog, who as EU ambassador to the world body drafted the text in cooperation with Ukraine and other countries.

“Unless the United Nations system and the international community through the General Assembly respond to this kind of illegal attempt, then we would be in for a very, very bad time,” the Swedish diplomat told reporters. .

A failure by the General Assembly to act – a vote is expected no earlier than Wednesday – would give “carte blanche to other countries to follow suit or recognize what Russia has done”, he added.

A draft resolution seen by AFP condemns the “illegal annexation attempts” by Russia of the Ukrainian regions of Donetsk, Luhansk, Zaporizhia and Kherson following “so-called referendums”, and underlines that these actions do not have “no validity under international law”.

It calls on all states, organizations and international agencies not to recognize the annexations and demands the immediate withdrawal of Russian troops from Ukraine.

In response, Russia sent a letter to all member states in which it attacks “Western delegations” whose actions “have nothing to do with the protection of international law and the principles of the United Nations Charter”.

“They are only pursuing their own geopolitical goals,” said the letter, signed by Russian Ambassador Vassily Nebenzia.

He denounced the “enormous pressure” that the United States and its allies exert on the other Member States.

Nebenzia said that given the circumstances, the General Assembly should vote by secret ballot – a highly unusual procedure normally reserved for matters such as the election of rotating members of the Security Council.

“It does not suggest a high degree of confidence in the outcome if Russia seeks to obscure the vote count,” a senior official in US President Joe Biden’s administration told reporters, speaking on condition of anonymity.

“That suggests a bit of desperation.”

Such a procedure would first require a vote by member states – not a secret ballot, according to General Assembly spokeswoman Paulina Kubiak.

The UN Secretary General, as the main defender of the values ​​of the world body, has bluntly denounced the annexations.

“It goes against everything the international community is supposed to stand for,” said Antonio Guterres.

“It flouts the purposes and principles of the United Nations. It is a dangerous escalation. It has no place in the modern world. It must not be accepted.”

Those remarks, the US official said, “show that it’s not really about the West versus Russia.”

In the vote in the Security Council, no other country sided with Russia, although four delegations – China, India, Brazil and Gabon – abstained.

Some developing countries have complained that the West is giving full attention to Ukraine, and others may be tempted to join them this week.

The vote will provide a clear picture of Russia’s exact isolation. Given the high stakes, draft supporters are doing everything they can to win over potential abstainers.

“It’s going to be tough,” said a senior European diplomat on condition of anonymity.

“For the Crimea annexation resolution in 2014, there were about 100 votes of support. I think we will have more this time,” he said, estimating the total support at 100-140 votes. .

In March, two previous General Assembly resolutions condemning the Russian invasion had obtained 141 and 140 votes respectively in favor, against five against (Russia, Belarus, Syria, North Korea and Eritrea), with 35 and 38 abstentions.

A third vote, in April, to suspend Russia from the UN Human Rights Council, passed but with less unanimity.

For the American official, the paramount question this week will be “who will vote with Russia”, while his objective is “to erase Ukraine from the map”.