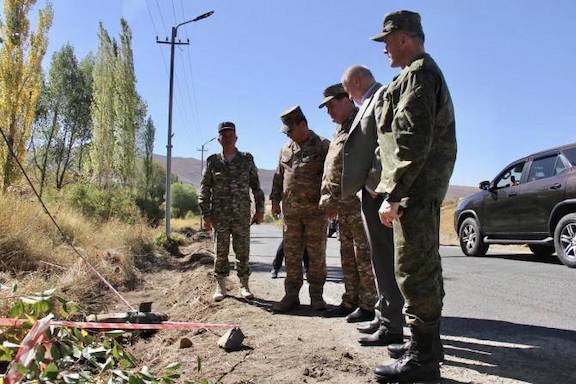 The US and Russian ambassadors paid separate visits to the border regions directly affected by Azerbaijan’s September 13 attack on the sovereign territory of Armenia.

US Ambassador to Armenia Lynne Tracy led a delegation of embassy staff to Syunik on Tuesday, while her Russian counterpart Sergei Kopyrkin led a similar group on Wednesday to Jermuk in Armenia’s Vayots Dzor province and to Goris in the province of Syunik.

Syunik Governor Robert Ghukasyan has warned Tracy that Azerbaijan may strike again, as evidenced by reports of Azerbaijani attacks on Armenia’s eastern border on Wednesday, following which three Armenian soldiers were you are.

“There is a great risk of military action against the peaceful population here. All of this must be given a strong assessment by the international community, which is why we once again draw everyone’s attention to the latest actions of the enemy and demand clear pressure to prevent another attack,” he said. Ghukasyan to Tracy.

Ambassador Tracy said this conflict is central to the concerns of the United States, even under conditions where there are other ongoing conflicts in the broader region.

“We are doing everything at the highest level, also through diplomatic channels, not to allow the use of force, to ensure the continuity of negotiations and to have the kind of prospect of resolving the issue that would bring long-term peace. and sustainable.” Tracy said.

Ambassador Tracy said she understands how difficult it is for residents of Syunik and other border provinces to have a sense of security, and that is why she is traveling to the province to understand the situation. on the ground and understand how the United States can help.

Governor Ghukasyan discussed several issues that have emerged in the context of developments around the province, and also thanked USAID for its work.

As Ambassador Tracy is completing her mission in Armenia, at the end of the meeting she said, “The situation in Syunik and Armenia in general will always be in my thoughts, and if there is anything I can do in the future to help establish peace here, I will do it no matter where I am.

Russian Ambassador Kopyrkin was accompanied by Embassy Military Attaché Vyacheslav Kosov during their visit to the towns of Jermuk and Goris. Lt. Gen. Tigran Parvanyan, the commander of the Armenia-Russia joint troop formation also joined them on the visit.

The Russian ambassador met with Armenian military commanders, got acquainted with the situation on the Armenian-Azerbaijani border and the damage inflicted on the border regions as a result of the September 13-14 shelling, the Russian Embassy said .