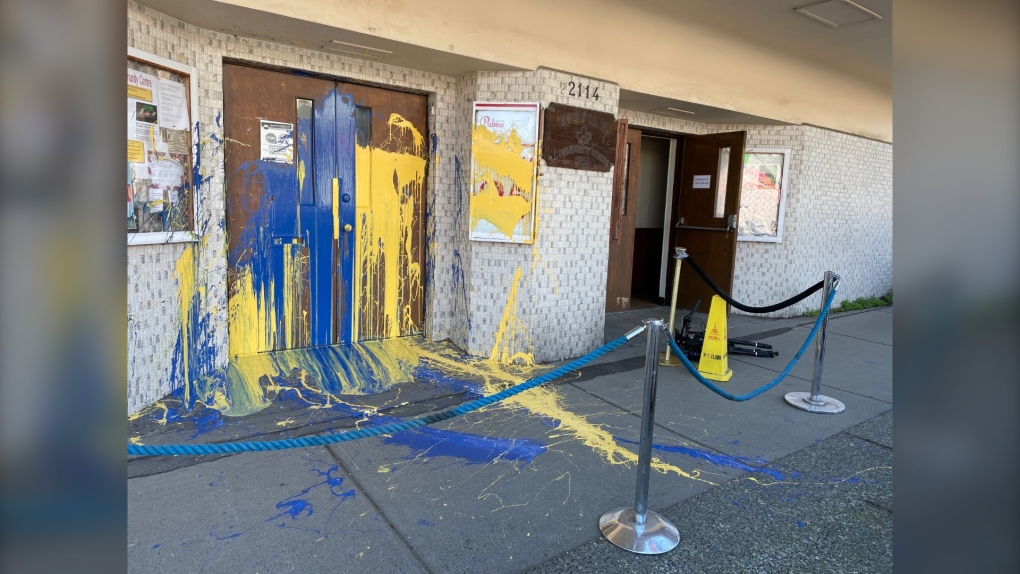 Vancouver police are investigating after an apparent act of vandalism at the Russian Community Center in the city’s Kitsilano neighborhood overnight.

The Vancouver Police Department said in a news release Saturday that it had sent investigators to the community center near Arbutus Street and West 4th Avenue after receiving reports that the building had been defaced with dirt. blue and yellow paint.

Footage from the scene shows paint splattered on the door and sidewalk, as well as some of the posters outside the building’s entrance.

There were no visible written messages with vandalism, but the choice of colors is almost certainly an allusion to the Ukrainian flag.

Russia invaded Ukraine late last month, drawing condemnation from most countries around the world and prompting significant sanctions from NATO nations, including Canada.

Natasha Lozovsky-Burns is vice-president of the Russian Community Center of Vancouver. She told CTV News the center has been around since 1956, when it was founded by Russian immigrants who came to Vancouver via China.

Today, the organization offers courses in Russian language, history, and culture, including a full Russian immersion school on Saturdays.

The center has no ties to the Russian government, Lozovsky-Burns said, adding that 80% of its members are actually Ukrainians.

“They have grandparents there, they have other close relatives,” she said. “They’re all hurting. The families here are emotionally upset, and for them to come into the room and see this done, it was very emotionally upsetting for them.”

Lozovsky-Burns said she understands Russian President Vladimir Putin and his government’s frustration that would lead to someone going after a Vancouver organization with Russia on his behalf.

She added that she lived in Ukraine for two years and has friends in Kyiv who are currently living in bunkers due to the invasion.

“It’s such a shame because they were targeting the wrong people,” she said. “They were basically targeting themselves by throwing paint at our building.”

The pro-Ukrainian demonstrations have attracted large crowds in cities across British Columbia and across the country.

Some prominent Russian citizens have also condemned the war, and thousands have been arrested during anti-war protests in that country.

Yet Vancouver’s Russian Community Center is not the first building associated with Russia to be defaced in British Columbia since the invasion began.

On Wednesday, red paint was splattered on the door of St. Sophia Orthodox Church in Victoria. The church is a Canadian parish of the Russian Orthodox Church, and Victoria Police said they were investigating the incident as a possible hate crime.

The Vancouver vandalism likely happened overnight, police said, adding that no arrests have been made and the investigation is continuing.


Are you in Ukraine? Do you have family in Ukraine? Are you or your family concerned? Email us.