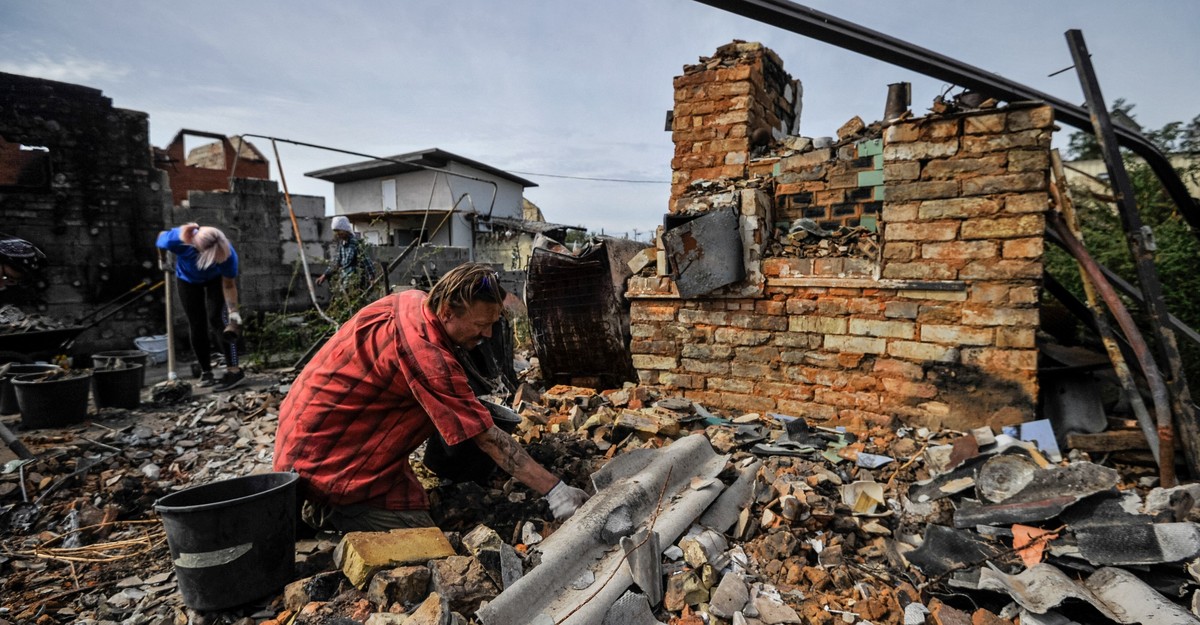 This is an edition of Atlantic A daily newsletter that guides you through the biggest stories of the day, helps you discover new ideas and recommends the best in culture. register here.

War is always a brutal affair, but why is the Russian military so determined to inflict civilian casualties on neighboring Ukraine? I spoke with a colleague who specializes in Russia.

But first, here are three new stories from Atlantic.

I have spent years teaching military officers who have served in conflicts all over the world. I’m not naive about the wickedness of war, and I’m grateful I’ve never been touched by it. But I am surprised by the pure sadism of the Russian war against Ukraine. The Russian armed forces engage in actions such as leveling cities, intentionally attacking civilian targets, and other apparent war crimes that we would associate with a war of extermination.

I turned to a friend and fellow Russia scholar for further consideration of this issue. Nick Gvosdev holds a Ph.D. in Russian History from the University of Oxford; he and I taught together at the US Naval War College for many years. (He still teaches there, and his comments here are his personal opinions and not those of the US government.) We are Eastern Orthodox Christians ourselves, which adds a particularly painful appearance for us to this immense tragedy. We had many conversations about the war, of which I now offer the last to readers trying to understand this terrible conflict.

Tom Nichols: Nick, international relations experts will decipher the “great power” dimensions of this war, but on the level of the real combat terrain, why is the conflict so brutal? Is it really enough to say that the Russians react to the humiliation of losing almost from the start?

Nick Gvosdev: In a certain way. At all levels of Russian society, from the taxi driver on the street to the Kremlin insider, there was a firmly held belief that Russian forces would be welcomed as liberators, especially in Russian-speaking parts of Ukraine. . Indeed, the initial Russian military plan was based on the assumption that Ukrainian soldiers would refuse to fight and Ukrainian politicians would defect. This turned out not to be the case. Most strikingly, it was Ukraine’s two largest Russian-speaking cities – Kharkiv and Odessa – that proved to be the focal points of the successful blunting of the Russian invasion.

Gvosdev: Yes. Western Ukraine – at least the areas that were never under Imperial Russian rule and were part of the Habsburg Kingdom – emphasized their separation from the Russians and has always been the heart of Ukrainian nationalism. But almost all of the atrocities we have seen have targeted people precisely in parts of Ukraine that are part of the Russian-speaking world. There seems to be a strong undercurrent to give these “traitors” their just reward.

Nicholas: I don’t think this is well understood in the West. The Bucha massacre, for example, was aimed at Russian speakers – almost as if they infuriated Russians more than Ukrainian nationalists.

Gvosdev: Bucha was a particular target, for sure, given his position as a dormitory for Ukrainian government employees and military officers. But all of this is a direct result of appropriating a World War II narrative in which the Ukrainian government is routinely depicted as a Nazi regime and those who fight the Russians are fascists. Meanwhile, Russian social media regularly uses the term “Allied Forces” — with all the World War II connotations that description carries — to characterize the Russian military and militias of the Donetsk and Luhansk republics. So think about it: if the Ukrainian military and government are the modern successors of the Nazis, then of course no quarter should be given to those who fight alongside the fascists, and especially those who betrayed their relatives. .

Nicholas: And the Russian army? Is there something about their training and background that makes them harder to control? They certainly haven’t improved since Soviet times in their effectiveness as a fighting force.

Gvosdev: Russia has tried to create an all-volunteer professional army, but it still lives by Soviet-era “traditions”, including brutalizing its own recruits – the so-called dedovshchina— and a strict hierarchical command structure. Add to that the ongoing problem of corruption within the military and you create a philosophy where it is better to bully others than be subjected to it yourself. Another point: the Kremlin is keen to avoid calling for a general mobilization, and so, as the United States did in Vietnam, a number of soldiers fighting in the Russian army in Ukraine chose the military service rather than prison.

Nicholas: I almost couldn’t believe it when I saw it.

Gvosdev: Worse, the Russians also rely on mercenaries and militias, another place people with criminal records can end up. In many of these cases, the atrocities resulted from the fact that some of these people were allowed to run wild without any particular supervision or discipline from the top other than general instructions to punish “traitors” or eliminate “Nazis”.

Nicholas: Ukraine, on the other hand, has realized that having a strong and reliable NCO corps works wonders in the field.

Nicholas: It seems that the strongest “force multiplier” in the Russian military is resentment: You betrayed us, you live better than us, you elected your own government, and so… you are Nazis and we can do to you what we did in WWII.

Gvosdev: That’s the logical outcome, and how you go from “brothers and sisters” to wholesale carnage. Ukraine, in Russian eyes, has turned its back on its brother Russia and, in seeking to integrate into the Western world, has thrust a sword into the heart of the “Russian world”. Russian politicians and pundits hammer home these themes every day. This narrative of “betrayal” is linked to general Russian resentment towards Europe and the West. Part of it has to do with living standards, of course, but it’s also driven by the feeling that Europeans – and now Ukrainians too – view Russia as not quite European, certainly not Western and perhaps not even civilized. And that resentment leads to a Russian determination to share Russia’s misery with others, whether by bombing Ukraine or unleashing an energy and economic crisis in the rest of Europe.

Nicholas: I sense an uncomfortable parallel here with events in the United States and other countries.

Gvosdev: The politics of resentment is always the gateway to legitimizing senseless rage and anger – and ultimately violence – against those you consider traitors or wrongdoers as a justifiable response to “being despised.” The Russians don’t have a monopoly on it.

Crypto was taking off and governments were finally starting to act on it. In 2013, when a young writer and software developer by the name of Vitalik Buterin wrote an impassioned article screed championing the blockchain gospel for publication, Bitcoin Magazine, cryptocurrencies were still a niche curiosity. But a series of regulations were spooking the fledgling industry, threatening the kind of anti-government ethos that has always been at the heart of the project. For Buterin, the panic was a bit overdone. Crypto, he argued, could not really be regulated. After all, that was the whole point of the new system: an Internet without masters, mediators and safeguards. “The future of crypto-libertarianism is bright,” he wrote. “Stop worrying.”

Look. How people across America celebrate their Saturday nights. From a queer bar in Florida to a havdalah ceremony in Massachusetts, our Atlantic interactive staff share photos and videos from across the country.

Do. Get your tickets for The Atlantic Festival, live at The Wharf in Washington, DC, (as well as virtually) September 21-23. For a limited time, Daily readers can use code SPECIALACCESS for free in-person registration. Learn more here.

In Wednesday’s postscript, I noted the brief moment when Russians looked with open eyes at their own history. One such Russian was a Soviet Army general and historian by the name of Dmitry Volkogonov, once a communist so pure and trusted by the regime as a military officer and scholar that even in the 1970s and early of the 1980s, he had access to knowledge of highly restricted Soviet historical archives. Volkogonov (whose own father was arrested and shot during Stalin’s purges) was so shocked by what he found in the secret documents that he turned against Soviet Communism. He later wrote several books drawing from these archives, including masterful and damning biographies of Stalin and Lenin, for which many of his former comrades called him a traitor. Shortly before his death in 1995, he said: “The only thing I can be proud of – the greatest merit of my life – is that I was able to fundamentally change my opinions.” He left behind works revealing the many sins of the Soviet regime, including Autopsy for an Empire: The Seven Leaders Who Built the Soviet Regime, making it particularly fascinating reading today as Vladimir Putin attempts to recreate the former Soviet Union.

Kate Lindsay contributed to this newsletter.